Netball catches Lachlan Barker's eye as he patrols the activities of the sporting world, particularly the team from Western Australia sitting atop the table — the West Coast Fever.

CATCH THE FEVER, all right!

The West Coast Fever has had a bad time over the recent past with persistent bottom of the table finishes in the league. The Fever were second last in 2008, then over the next six years they never finished better than fourth last (7 out of 10) and so now to be sitting on top of the table must be immensely satisfying for the women of the west.

The player stats reflect this, with, in attack, Diamonds shooter Caitlin Bassett leading the way with 397 goals at an 85.7% shoot percentage. Khao Watts and Natalie Medhurst have been a big part of that with goal assists. While neither of them sit atop the 'goal assists' stat list, the fact that there are two of them shows how the Fever machine is operating.

Getting the above mentioned attackers the ball is midfielder April Letton, with 14 intercepts — fifth on that list. I was rather annoyed that the netball website doesn’t seem to list defender statistics, since it’s an integral part of the game and no team can make it to the top of any league ladder with a leaky defence.

However, that is a defender’s life it seems: toil hard for little recognition, and only get noticed if you make an error and the attacker you’re marking gets through and scores. Then everybody knows your name.

Still, the Fever are pushing hard at the top, they have won 8 from 9 and the ninth wasn’t a loss but a draw, so they’re undefeated to boot. The crowds are reflecting the rise and the club is happy with increased crowd numbers, including a sell out on Easter Monday for the match against the Melbourne Vixens.

For the latest round, the Fever defeated the Waikato Bay of Plenty Magic 54-49. I’d like to help the cause of getting defenders some well deserved credit by saying the Fever defenders, Shae Brown Courtney Bruce and Josephine Janz-Dawson, put the crunch on the Magic attack early and held the Magic to only nine goals in the first quarter, while the Fever nailed 16 of their own. This tight early defense allowed the Fever some breathing room and thus to hold out the Magic for the rest of the game, and get home by a five goal margin.

And just a little statistical factoid: the match between the Northern Mystics from Auckland and the Fever is the longest distance regular season home and away match in the world. A point brought to my attention by sports man for Radio National, Warwick Hadfield. For this, the away team travels 5,343 km to play. The only other game that comes close is Ice Hockey in Canada, where the Montreal Canadiens travel 4,910 km to play the Vancouver Canucks.

In the other completed netball matches of the round, the Queensland Firebirds got home over the above mentioned Mystics 53-47. The Vixens won a close one against the Tactix 56-52. The Central Pulse and the NSW Swifts locked it up at 47 apiece at full time, while the Southern Steel and the Adelaide Thunderbirds closed out the round with a 53-all draw in Dunedin, New Zealand.

Our footballing women in Victoria had a week off, due to the Anzac day weekend, though a team representing the Victorian Women’s Football League played a representative match against the Australian Defence Force, their competition will resume next weekend, May 3.

That, however gives me a chance to mention women’s football in NSW and Queensland, where the rugby codes are dominant.

I checked with my elder brother, who is on the executive of the rugby league for Group 21, his home league in the Hunter Valley of NSW. He was telling me that “yes”, there is women’s rugby league, known as Oztag. This is the same game as the men’s, but there is no tackling. Instead, to arrest the progress of the running player, you snatch tags off the side of the shorts of the ball carrier. Once the tag is taken, the player comes to a halt and plays the ball.

Each rugby league group has a women’s comp and so this allows the women with an interest in rugby league to take part. What’s more, Oztag has a range of mixed comps and this allows for both sexes to play the game without the horrendous aggression and frequently occurring injuries that detract, in my opinion, from the men’s game at the highest level.

And I’ll just declare my family interest here and hope it doesn’t lead to complaints on the comment section. The following picture shows my niece Kim Barker rattling across the turf for the Scone Thoroughbreds in the group 21 Oztag grand final last year. You can see the tackle tags clearly on the opposition player, no 17, moving up to “tackle” her. Kim and her Thoroughbred team mates won the match and are thus current Group 21 champions. 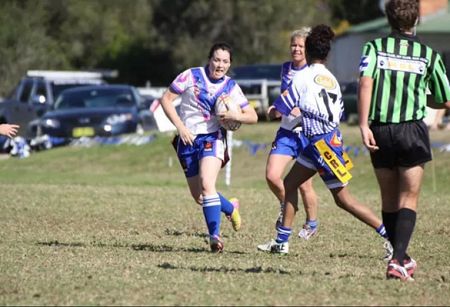 There is a tackle version of the women’s game, but that’s only at the highest level, and the pinnacle is to play for Australia, this team is known as the Jillaroos. The Jillaroos won the most recent Women’s Rugby League World Cup – 2013, in which they defeated England in the final.

And a final note on rugby league which I found very uplifting.

One of the office managers here, where I work – Susanna – stopped by my desk this morning and said:

“It’s Monday, so you’re doing your sports column, is that right?”

I nodded, so then she showed me a picture on her phone of her grandson, Tyler, playing rugby league in Canberra. Her grandson is a mature lad of eight  and I say that because Susanna then went on to tell me that her grandson had told her about his match on the weekend.

“I play half back and it’s my job to get the ball to the people who run with it, and I make sure that everybody gets a turn."

So Tyler doesn’t just give the ball to the best players.

I think that’s great as, when I was a boy on the various sports fields, I wasn’t that good and often didn’t get to take much part, as the more accomplished players would do everything, and I rarely saw a touch of the ball. It’s also good for the team, as the hard running cardio work is shared around.