How the Royal Commission into Child Sexual Abuse SHOULD be run

With the terms of reference for the Royal Commission into Child Sexual Abuse being announced today, law reform advocate Evan Whitton reveals his submission to the Government into how it should be run — compare and contrast.

Common lawyers, including judges, lawyer-politicians, legal bureaucrats, and academics, may find some of this new and depressing, but there is no point in being other than blunt about such an important inquiry.

An inquiry’s task is to find and manifest the truth, but no university teaches inquisitorial techniques — perhaps because law schools fear students and the wider public might get to like a truth-seeking system.

The result is that staff are not trained for the job and, therefore, no inquiry is run properly. Inquests, Royal commissions, standing commissions on corruption such as the NSW Independent Commission on Corruption (ICAC) are bastard combinations of adversarial and inquisitorial techniques.

Bron McKillop, of Sydney University law school, is the authority on the French and German inquisitorial systems. His advice should be sought.

The basis of all strategy is the selection and maintenance of the aim/s.

- To find and manifest the truth of child sex crimes.

- To provide a measure of justice for victims by collecting evidence to put on trial paedophiles and those who covered-up their crimes.

- To minimise the cost to taxpayers who fund the inquiry.

- A cover-up of a crime is a crime in itself, perversion of the course of justice.

- Organised crime is systematic criminal activity for money or power.

Effectively none; the Commissioners should be free to go where evidence takes them.

Australia’s most successful inquiry – that of the Hon Gerald (Tony) Fitzgerald’s into top-down corruption in Queensland during the Bjelke-Petersen regime – ended up with no terms of reference.


Commissioners: two non-lawyers and a lawyer-chairman

Untrained British judges invented a number of truth-defeating devices, including rules which conceal evidence and the incomprehensible jury formula — beyond reasonable doubt. Most were invented after lawyers began to defend criminals in the 18th century,

The devices make it relatively easy for rich criminals to get off, but are so ingrained in common lawyers that it is hard for them to recognise the truth. There should thus be three commissioners: a lawyer-chairman, book-ended by two intelligent lay persons to identify the truth.

Among possible chairmen, Tony Fitzgerald, now 70, has the runs on the board.

The Commissioners should have the power to offer immunity from prosecution to some who confess, provided they tell the truth at the inquiry and later trials.

An organised criminal, police chief Sir (as he then was) Terry Lewis, told his colleagues they would be all right if they stuck together at the Fitzgerald Inquiry, but Fitzgerald’s offer of immunity caused a rush to the exits — most notably Lewis’s bagman, Jack Herbert. He gave evidence at 40 subsequent trials.

There is a view that bureaucrats like to control information to suit their interests or those of their political masters. To avoid any such risk, the Commissioners must be able to choose their own staff. When Fitzgerald insisted on that, legal bureaucrats are said to have fallen to biting the carpet.

Police. Chief Inspector Peter Fox, who forced the inquiry, can advise on which NSW police it might be unwise to use as investigators. Likewise, former Federal Police officer Ross Fusca. He has said he was offered an inducement to make an investigation into Wheat Board bribes of $300 million to Saddam Hussein “go away”.

Some sex crime victims (and taxpayers) will thus also be victims of the adversary system when trials are held. The figures suggest that a Special Prosecutor will get the best possible results.

Justice Phil Woodward’s inquiry into the assassination of Donald Mackay revealed the truth about the Griffith Mob. A Special Prosecutor was not appointed; no mobsters were charged; the conviction rate was zero.


“The total costs [of the Special Prosecutor’s office] were $19,098,730, not including the salaries paid to the police officers seconded to the special prosecutor's office."

A Special Prosecutor should be appointed immediately to work in parallel with the inquiry.

The bad news is that some states have given accused a choice of trial by (untrained) judge alone, or trial by jury.

‘Figures from the NSW District Court show that the jury convicted in half the cases while the judge, when hearing a case alone, convicted in only a quarter.’

The commission should adopt Justice Jim Woods’ procedure at his inquiry into NSW police corruption. He had a small pool of competent – but not the highest-paid – taxpayer-funded lawyers who represented suspects for nothing.

Suspects should, of course, be free to waste money on their own lawyers.


All relevant evidence to be available

It is obvious to everyone, except common lawyers, that hiding the truth makes it difficult to find it.

A judge, Harry Gibbs, generally adhered to the rules for concealing evidence at his 1963-64 inquiry into police corruption. His finding – that not one policeman was corrupt – made him the laughing-stock of Queensland. He was made Chief Justice of the High Court in 1981.

One of the rules is legal professional privilege, or client-lawyer secrecy

Or in some cases client-lawyer conspiracy, as Philip Marlowe noted in The Long Goodbye:


“How long do you think the big-shot mobsters would last if the lawyers didn’t show them how to operate?”

A former judge, Terry Cole, inadvertently fell into error at his 2006 inquiry into bribes to Saddam Hussein. He ruled that some Wheat Board documents were covered by legal professional privilege.

To make it absolutely clear, it would thus be prudent to write into the legislation that NONE of the rules for concealing evidence can apply at the inquiry.

Counsel assisting should follow French inquisitorial procedures, That is, the juge builds up a dossier on the suspect; he gathers evidence, collects documents, hears witnesses, takes depositions, arranges confrontations between conflicted witnesses, including suspect and alleged victim.

At this inquiry, there is a risk that non-victims will gang up on someone for reasons other than sexual abuse — but the French system takes the presumption of innocence seriously: the suspect’s lawyer has access to the dossier. If he can convince the juge that the truth lies elsewhere, that is the end of it.

Counsel assisting should not appear at hearings. The Commissioners, guided by the dossiers, should question witnesses.

Alan Moir’s cartoon in The Sydney Morning Herald on 21 November 21 2012, suggests that lawyers down on their luck and with mouths to feed are looking forward to more gainful employ at hearings. 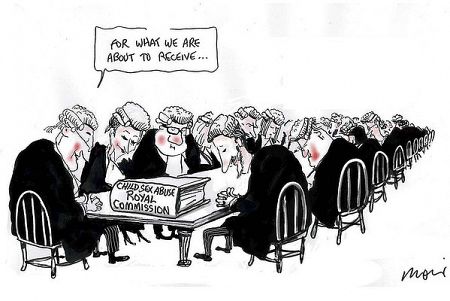 A tight leash on lawyers. Lawyers’ role should be strictly limited for three reasons.

First, the evidence a suspect gives cannot be used against him at a trial, but he can be done for perjury at the inquiry. It follows that the only sensible advice the pool lawyer can give him is: tell the truth.

Second, in the French system, lawyers are not allowed to question witnesses directly lest they pollute the truth with sophistry: trick questions, false arguments etc. At these hearings, they can hand up questions for the chairman to ask.

Third, if lawyers are allowed to question witnesses, they might also revert to habit and prolong the process. The adversary system’s longest spinout is 117 years.

Length. Fitzgerald said he could have spent 10 years doing nothing more than inquiring into ministerial re-zonings in south-east Queensland. (A Bjelkist minister, Russ Hinze, extorted bribes from some who wanted land re-zoned.) Fitzgerald stopped hearings after 18 months, and reported six months later.

The general truth about child sex crimes is already known; reinforcing that belief requires little more than a snapshot via selected cases of abuse and cover-up.

In France, the trial judge hears enough evidence to manifest the truth and no more. Hearings are quite brief, perhaps a day or so; the Commissioners should do the same.

Cost. The Fitzgerald inquiry ran from 1987 to 1989. Mick Ahern, who succeeded Bjelke-Petersen as Premier, told me last year:


“I have heard that the round up cost of all of it was $20 million. Includes paid barristers, staffers, rents, revolvers, snoop devices, hankies, etc."

The cost at today’s rates would be at least twice that.

If the child sex crimes inquiry is run on strict inquisitorial lines, it should cost taxpayers no more than $50 million.

Reports. Inquiry reports tend to be wishy-washy, because common lawyers’ brains are addled by the adversary systems truth-defeating devices. Non-lawyer Commissioners should have a heavy input into reports.

Taxpayers who fund the inquiry are entitled to know what the Commissioners thought about the guilt of individuals. The Commissioners should write their conclusions in a secret report, embargoed until all trials are concluded.

(Evan Whitton is a legal historian. His fourth book on the law, Our Corrupt Legal System: Why Everyone Is a Victim (Except Rich Criminals) does what law schools do not: it details the origins and methods of the two systems, and how the common law developed in six stages. Dr Robert Moles (LLB Belfast, PhD Edinburgh) said it “is one of the most important books I have ever read on the common law legal system. [It] should be required reading on Introduction to Law courses in all law schools”. Available from: books.google.com.au/ebooks, Amazon, The Book Depository.)