On Thursday, it will be 70 years since America dropped its first nuclear bomb on Japan — and still the horror lives on, writes Linley Grant OAM.

On 6 August, it will be the 70th anniversary of the day America dropped a nuclear bomb on the people of Hiroshima and then Nagasaki.

The incredible horror of those events, with thousands killed and millions more affected by radiation, was burnt into my memory. I was at school that day. I remember walking the mile to and from it, picking buttercups and playing with a frog on the edge of a drain; stopping to watch a brown butterfly enjoying life and listening to a soaring lark. Then listening to the ugly news of WWII that night, realising that the dropping of nuclear bombs created an incredible, new enormity.

These days, it seems like a nightmare most Australians do not remember, or of which they have no comprehension. So much has changed, with women busily rushing to work and shopping, as if food and clothing were the most important things in life; where, in busy restaurants, “to eat, drink and be merry” is the daily mantra and only fleeting thoughts are given to our marvellous world, with its spring blossoms and bird song; and even less to the really important action we should be taking to keep our island and our planet as each is — a wonderful place in which to live.

Is this because we cannot bear to acknowledge the underlying fear we have because we cannot control earthquakes, global warming and nuclear disasters? Certainly, earthquakes and the moving of the tectonic plates below us, are beyond control, but we can do something about man-made problems.

Who remembers the destruction of the Pacific atolls and other sites of nuclear testing like, Maralinga in South Australia? All still basically uninhabitable. More recently, the world has experienced a string of disasters at nuclear power plants – such as Chernobyl and Fukushima – and search for a place to dump nuclear waste, which should remind us that we still do not have an answer to safely using uranium.

Hiroshima: 70 years on, one survivor remembers the horror of the world's first atomic bombing http://t.co/FDyjBPnEXV pic.twitter.com/k9aiWaETPF

Should we, as educated Australians, tolerate, or refuse to think clearly about the massive global problems the use of uranium has caused? Like the 15,000 nuclear weapons, which could destroy us all at any time, despite the Nuclear Non-Proliferation, Partial Nuclear Test-Ban and Comprehensive Nuclear Test-Ban treaties. Is the recent treaty with Iran concerning the non-production of nuclear material for weapons a matter for rejoicing? Is it sufficient? Is all right with the world?

The Dutch people have taken a class action against their government on the grounds that its duty of care has been violated in respect of global warming. Perhaps citizens of every country where ageing nuclear weapons are stored should take out class actions too, against their Governments, on the grounds that nuclear weapons similarly threaten their safety, just as global warming does.

Governments have taken little notice, despite recent global petitions signed by millions of people, asking for action on various issues like education for all children, an end to slavery, unjust detention and a cessation of the arms trade. What a different world it would be if the billions of dollars that have gone into creating and maintaining nuclear weapons had gone into providing arable land, fresh potable water, nourishing food, secular education, hospitals and effective health care.

Perhaps if we, the people, acted together with courage and took class actions against those Governments possessing nuclear weapons, the United Nations for being inactive and those who work in the nuclear industry, so that the people with the power to act were forced to get rid of these obscene weapons, we could all feel that we, who are living now, had done something worthwhile in our time on Earth to rid it of the fear that was created 70 years ago when Hiroshima was destroyed.

If you are in Brisbane, there will be a Hiroshima vigil in the Queen Street mall on Thursday afternoon; details below: 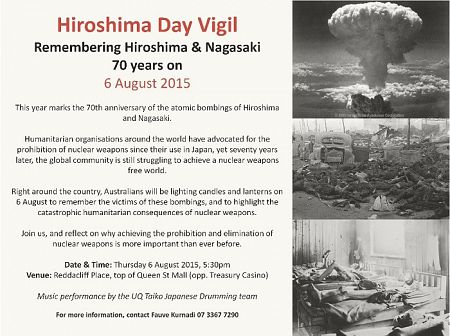 4 August 2015, 6:00pm On Thursday, it will be 70 years since America dropped its first nuclear bomb on ...
Join the conversation
comments powered by Disqus
News updates