Here we Joh again! Schoolies Week in Surfers and the Newman police state

It's Schoolies Week on the Gold Coast and the Queensland Police Service are out in force — maybe too much force, writes managing editor David Donovan.

SIX YEARS AGO, in 2008, in our family’s first year of living in Surfers Paradise, I was working in the study downstairs when I heard a noise outside. Going out onto the patio, I saw the backs of two young men, who were sitting on our six foot high garden wall with one of my then four year-old son’s Tonka toys between them. I yelled at them and they leapt off the wall into the street outside.

After grabbing the front end loader off the wall, I ran around into the street, only to see about 200 eyes stare right back at me — the street was filled with 17 and 18 year olds ‒ schoolies ‒ milling about, all half, or maybe even three-quarters, intoxicated, shouting and pushing and laughing and wrestling and singing and groaning. I backed away slowly inside and locked the gate.

That was 2008, but Schoolies here on the Gold Coast is not really like that anymore.

Every year, I have watched it subside a bit, and then a bit more, until these days it is not much more disruptive for residents in my area than, say, the Gold Coast Marathon or, heaven help us, the annual V8 Supercar rev head convention. These days, I hear school leavers are more inclined to go to Fiji, Bali or Thailand than the Gold Coast — and, frankly, who could blame them?

But still, Schoolies attracts the headlines, largely because involves this rite of passage for young people ‒ a Bacchanalian spree of alcohol, sex and drugs for a week on the sun-drenched Gold Coast ‒ as they celebrate finishing high school.

As you’d expect, there are always arrests for violence and drugs, and someone usually tragically dies after doing something silly — such as balcony hopping, or swimming in the ocean at night.

This year, police say numbers are up on last year, but I don’t think so — and neither do the blokes running the local chicken shop and convenience store, who both say this year is quieter than the last.

People talk about "Schoolies Week", but actually it runs for at least two weeks. The first week of Schoolies has the local school leavers who, due to the vagaries and inconsistencies in Australia’s education systems, finish a week earlier and a year younger than the kids from southern states.

That means Queensland schoolies are usually 17 during Schoolies Week and so can’t they go to licensed premises. There is a special precinct for them down on the beach in Central Surfers where they can mingle and listen to bands and live music, but the fact they can’t go to pubs or clubs means you are quite likely to find them on the street. This usually makes the first week louder and more “interesting” than the second for Surfers Paradise residents.

Queensland Schoolies Week finished last Friday. It is usually pretty safe to walk the streets in the second week.

So, last Saturday night, at about 11pm, after having dinner and watching Russell Crowe’s grim and rather disturbing rendition of Noah, I realised I was out of wine. This would not normally be a problem, but given I had planned to stay up to watch the Wallabies play England in their season-ending finale, some sort of pain relief seemed advisable. Given I’d had a couple of drinks, driving was out of the question.

Consequently, I set off on foot for the nearest bottle-shop open at that time of night, at Hanlan Street in central Surfers Paradise, one street south of the Cavill Avenue Mall.

It was quiet walking down Surfers Paradise Boulevard, with just the occasional small cluster of teens out and about, or milling around outside a fast food joint. At my destination, there were no other customers.

Down Hanlan Street towards the beach, however, however, things began to change rapidly. I noticed that every young person in the street was being stopped and interrogated by police. 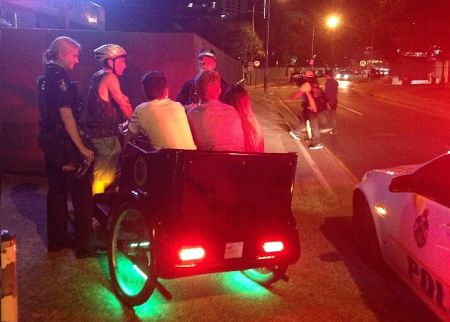 Even young people in pedi cabs were being stopped to have their details taken down by police.

So I started taking photographs.

At the corner of Hanlan Street and the Esplanade, looking back down the street, I could see police talking to three separate groups of youths — all of them acting peaceably and none doing anything in any way untoward that I could see.

Heading south parallel to the beach, I could see three police cars and blue police vans parked on the side of the road. Reaching Trickett Street another arrived and parked near me. I took a photo of it.

A short, slim male officer leapt from the car and starting walking briskly beside me, his adrenaline noticeable.

“Why were you taking photos of a police vehicle?” he demanded.

“Because I am a journalist and I am wondering about what appears to be an excessive police presence in Surfers Paradise,” I replied.

“We’re just doing our job,” he snarled. “Take it up with the premier.”

Yes, maybe I will, I thought.

He was heading for a small park to join about a dozen police officers, who had surrounded one pimply adolescent and three teenage girls. 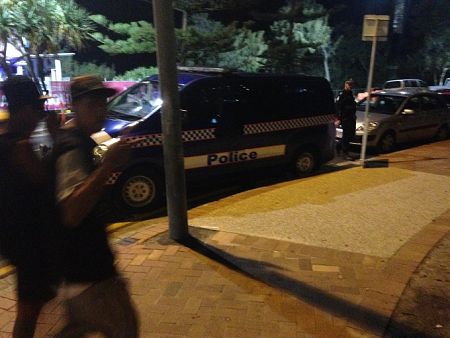 I snapped a few photographs. The pimply youth turned to me.

“What are you doing taking photographs?” he asked, seemingly upset.

“I’m a journalist,” I replied.

I wasn’t sure he was right about the legality of photographing a 17 year-old, but I wasn’t interested in an argument. The police lost interest in the teenagers and stood around me.

A towering heavy-set police officer loomed, before bringing his face down to mine.

“What are you doing taking photographs of these kids?” he growled.

“I’m a journalist,” I replied, for the third time in two minutes, “and I’m thinking about doing a story on the police presence here in Surfers Paradise tonight.”

“Well, I can smell liquor on your breath, so you can’t be working,” he said, exhibiting a very flimsy understanding of the journalism profession.

“I'm going to do a background check on you. Got any ID?” 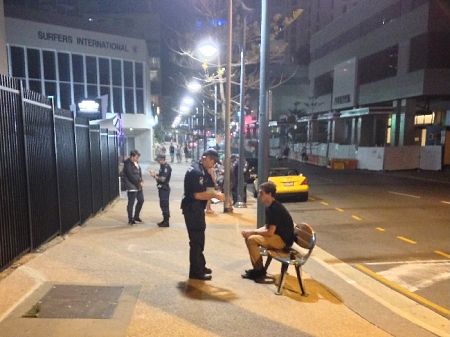 Every schoolie coming down Hanlan Street towards the beach was being stopped, questioned and having their details taken down, says David Donovan.

“You need to get rid of those photos, my friend is underage,” said the pimply boy, who had re-appeared near my shoulder.

I handed him my phone. “None of the photographs identify your friend,” as she had her back to me as I took the snaps, “but delete any you want.”

The hulking cop said to him: “Yes, and delete any that include the police.”

“You like the coppers, dontcha?” said the youth, looking at the photos on my phone.

He looked at me momentarily and handed me back my phone. Defying the constabulary, he hadn’t deleted any of the other photos.

The police gave me back my ID and I sent me on my way.

Back at my house, sipping a Marlborough Sav Blanc while watching Australia predictably lose to England in Rugby, I couldn’t help but wonder about the overwhelming police presence that night. Was it over the top?

A report in the local paper the next day suggested the ‘Rapid Action Patrol group’ had ‘arrested two drug dealers’ at Cypress Avenue, on the other side of the Surfers mall; perhaps this was what the police were doing in Hanlan Street.

But is it necessary or appropriate to stop every young person in an area, grill them and take down their details, before doing an ID check? If you stop every person, you’re bound to find someone with something inappropriate eventually, but is that the sort of society we want to live in?

None of the Schoolies I saw were breaching the peace or were even particularly intoxicated. I didn’t see a single arrest, though I wasn’t there long.

If I was a trader or hotelier, I think I would be concerned by the actions of police during Schoolies Week this year. How many young people have Queensland Police scared away from Surfers Paradise forever by their heavy-handed intimidation?

Premier Campbell Newman’s controversial VLAD bikie laws have presumably made any bikies go over the border to Tweed Heads — so… what? Bored police are now picking on teenagers? Are they being taken away from other police work to do this?

Whatever is going on, it isn’t making me feel safer here in Surfers Paradise.

Queensland. Beautiful one day, police state the next. 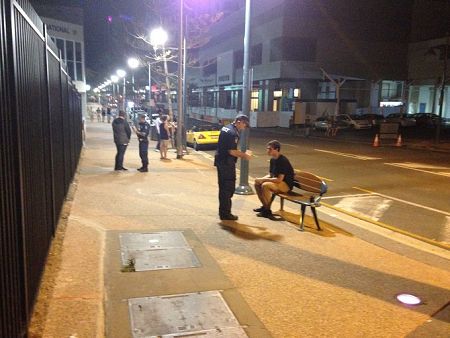