March in March: Campbell Newman and the random legal danger

In Queensland, since October, 2013, everyone is subject to two forms of legal danger: the random legal danger and the fixed legal danger.

They are both capable of striking close to you.

Before I describe these two types of danger in detail, let me discuss the way in which the law can come to strike us when we form part of a community.

Most of us think that “if you do nothing wrong, you have nothing to fear” is a phrase that not only applies to us but is a guarantee of our safety.

That’s why we did nothing when they came for the gypsies. Because we had nothing to fear.

For most of us, this confidence draws just a little on our poor memories. We conveniently forget all those times we drove just a tiny bit over the limit; brought a bargain at the pub; brought some shares or backed a horse on a sure fire tip from a mate; shared a joint on a fishing trip; flirted at a party; got into a little fisticuffs after the football; or, generally, acted like a nob.

But it is not just self-delusion or hypocrisy that places us into the scope of legal danger.

It is also our connectedness.

Who doesn’t know a mate at the club who can’t hold his beer as well as we can? What father or mother’s child hasn’t confirmed the truth of the new wisdom that the brain of a twenty year old doesn’t have a long way to go to maturity? Who doesn’t have a favourite niece or nephew who doesn’t always follow our unimpeachable advice? Who hasn’t seen their best friend’s child show the same bad habits we all had when we were oh so much younger than now?

We are connected. And someone near to each of us, if it hasn’t happened yet will fall foul of the new laws that throw to the winds the old principles of equality before the law; punishment for what you’ve done not who you are or with whom you associate and the right to know what accusation is made against you.

And when that happens, if you don’t care now, you will care about what has been called “the bikie laws”.

The VLAD Act: the Random Impaler

The Vicious Lawless Association Disestablishment Act 2013 (the VLAD Act) was part of the first wave of legislation that passed rapidly through the Queensland Parliament in mid-October 2013. It was assented to and became law on 17 October 2013.

The VLAD Act is not interested in whether you’re a bikie or not.

The VLAD Act is directed at any association of three or more people whose coming together may be formalised in some way or may be totally informal. A person may become part of an association simply by taking part in the association’s activities on one occasion.

The VLAD Act’s central effect is to make use of massive, minimum sentences, which may not be ameliorated by parole (except for police approved informers or super-grasses), for a wide range of offences committed while being part of the association’s activities.

Unless the offender proves that the association did not have, as any part of its purposes, the commission of offences, the offender is sentenced to her normal sentence (which may be as little as a fine or a good behaviour bond) and then must be sentenced to 15 years imprisonment to be served without chance of parole.

If the offender is an office bearer of the association, the minimum extra sentence becomes 25 years in jail without parole.

The well-named VLAD Act will strike at random. It lies in wait to impale the hearts of the unsuspecting. It has been marketed as impacting only upon the activities of vicious career criminal gangs.

However, because of its loose wording and the wide list of offences to which it applies, it is triggered by many relatively benign incursions onto the wrong side of the criminal law. A group of fisherman who take some joints with them to share on a weekend trip, or a group of petrol heads who drag their vehicles on the deserted roads of Pinkenba, could find themselves facing 15 or 25 years each.

The VLAD Act will not be wheeled out on every occasion it could be used. You will comfort yourself that you need have no fear because the police officers who catch you and your mates on the wrong side of the law will know you are respectable and will, conveniently, leave out the fact that, between the five of you, you more than make up an Association for the purposes of VLAD.

Only the migrants and the Indigenes and the young blokes from those housing commission suburbs will ever have to do a 15 year sentence for a good behaviour bond offence. And you may think that that is just and proves that God is in her heaven.

And you may be right. But will those same discerning police officers be just as careful and concerned with your sister’s kids or with those rowdy mates of yours from the cycling group — especially, if one of them is sufficiently full of cheap wine and bad manners to take a swing at the police officer.

VLAD, the random impaler, lurks out there. It knows where you and those close to you live.

And, one day, it’s bound to come calling.

On 17 October 2013, the same day as the VLAD Act kicked into life, a new legal concept was created: the concept of a criminal organisation.

Using this new concept, the government is not dependent on police officers finding three or more mates committing a listed offence together[1] and charging them under the VLAD Act. And jailing someone for 15 years is such a blunt and limited instrument.

Using ‘criminal organisation’, the government only has to pass a regulation and any group of people the government chooses are subject to the new legal disabilities.

It doesn’t matter that you have been a member of the organisation for twenty years and never engaged in an iota of illegal conduct. The moment the regulation is passed, you are subject to all the legal disadvantage that the government wants to heap on you.

The government does not rely on regulations to create legal disadvantage. They pass Acts of Parliament for that.

So far, they have been quite restrained.

Similarly, you cannot go to whatever place the government declares off limits to you. Nor can you go to any event the government bans you from. That also gets you at least six months inside.

If you are arrested for any kind of offence, you have to prove that you deserve to be bailed rather than be kept locked up until your trial. For everyone else, the police have to prove why they cannot be allowed to go free pending their trial.

And, while you are awaiting trial or while you do your six months or more, you will be kept in solitary confinement without access to the most basic prisoner privileges. Until you go mad and well beyond.

If you get caught having a stoush in public, you will serve at least six months in jail.

But you don’t have to break the law to be punished. Not even the law that applies only to you.

On the word of the police, you can be identified as a member of a criminal organisation. Even if the information is wrong or out of date, you won’t get to know what it is — which makes it hard to disprove.

And, if you happen to work in a certain job, chosen by the government, you lose your job and the business you built up working at that job.

And if your organisation has been chosen, you are out of that job from 1 July, this year.

The great thing about ‘criminal organisation’ for the government (fairly bad for you) is that it acts as a great Duplo set. It can be built up high. It can spread out at the base. The pieces seamlessly fit together.

And why not ban them from holding a driver’s licence. That will clip their wings.

There is no privilege that the government cannot, by passing a law in a midnight sitting, withdraw from those criminal gang members.

And, once we have the legal disabilities imposed to our delight and contentment, the great thing is that they apply to every member of every criminal organisation.

We can pass a regulation to make a few more criminal organisations. Those animal rights people are always breaking into abattoirs, so let’s deem them to be a criminal organisation. And those workers’ groups — they don’t know the meaning of the human right to cross a picket line. And those civil liberties people — they are definitely plotting to disturb the horses at G20.

Let’s include all of them. One trip out to government house and it’s done.

What a great system.

You may not think that these matters need to trouble you. You may think that only people who do bad things need fear the law.

For the reasons I have discussed, you may find out too late that you are wrong.

Statement given to the March in March organisers in Brisbane on Sunday, 16 March 2014. You can follow Stephen Keim SC on Twitter @StephenKeim1.

[1] Although, the definition of “criminal organisation” includes a random means of one of a list of offences being committed by any group of three or more people who thereby constitute a threat to the community 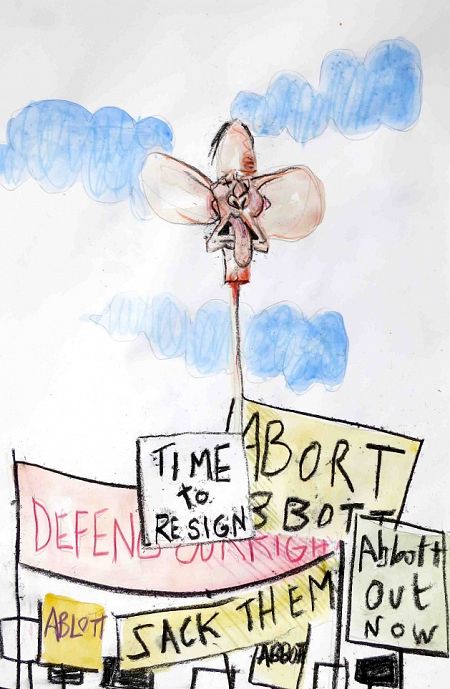