Ever, in the sporting realm, heard of the Mugars? No? What about the Creekers? How about the St Kilda Sharks? You may have heard of St Kilda, as that’s an Aussie rules team, but they are known as the Saints, so who are the Sharks and all the rest?

With the summer coming to the end, and the football codes getting underway around the country, and with the IA commitment to women’s sport first, I thought I better check if women played any of these codes. I knew that Australia has a women’s rugby team, the Wallaroos, but of the others, no knowledge.

So, it turns out that women’s Aussie is thriving in Australia and, indeed, around the world.

Women’s Aussie rules began in Victoria, of course, mostly centred on the Melbourne Uni team, the Mugars. They organised interuniversity tournaments and this grew into the Victorian women’s football league. This proved popular and now women’s Aussie rules has competitions in all states and the two territories.

From this base the sport of Women’s Aussie rules has moved to become an international sport, with six nations – Australia, USA, Canada, Fiji, Ireland and Tonga – playing in the inaugural Australian Football International Cup in 2011.

As for the names, Mugars stands for Melbourne University Girls Aussie Rules Squad. The Creekers are from Plenty on the northern outskirt of Melbourne and take their name from nearby Diamond Creek, and are thus the Diamond Creekers. The other teams in the Victorian Premier League, joining the St Kilda Sharks are the Darebin Falcons, Eastern Devils and VU-St Albans Spurs (VU stands for Victoria University).

And to say this sport has proved popular is somewhat of an understatement; in Victoria there are now 45 women’s teams, making up six divisions. 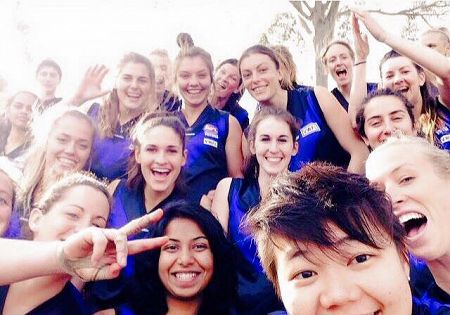 So, whatever you think of sport, here is another example of female empowerment and never has that term been more representative, considering some of the tackles that these women put in.

Of the more familiar women’s sports, the Trans-Tasman Netball league is underway and was characterised by two draws in the most recent round. This is somewhat unusual, as high scoring sports like netball rarely end in draws. As far as I can tell, soccer and cricket seem to be the sports with the most draws, though this is learned conjecture. Either way, the Netball round provided a wealth of call-the-heart-surgeon excitement.

The NSW Swifts and the Queensland Firebirds played one to the draws – 47 all – while the other involved the Adelaide Thunderbirds and the Northern Mystics (the Mystics are based in Auckland, in the north of New Zealand), which ended 51 apiece.

However, added to that was the Melbourne Vixens getting home over the cumbersomely named, Waikato-Bay of Plenty Magic in another heart stopper (51-48). The only “comfortable” victory, if you can call it that was the West Coast Fever over the Southern Steel, 67-60. The final netball match of the round, an all NZ affair is between the Canterbury Tactix and the Central Pulse, and if that goes to form, it’ll be a draw or another close one.

With the male sport, the Cricket World Cup, after a long marathonish haul, 42 matches, finally completed the group games and launches into the knockout phase.

So, in reverse tier order, the outcomes were as follows.

In Group A, Scotland came last. Nuts. Still, they were not disgraced and will learn much from this outing on the biggest cricket stage available to them. Afghanistan were second from the bottom of Group A, courtesy of their first ever victory in the world cup over the above-mentioned Scotland.

Why England is the team of World Cup Cricket tournament http://t.co/nM33FUKfJ1 pic.twitter.com/f0miki0NuG

Top tier England, woefully out of form, were the other team who didn’t qualify out of Group A, finishing third last.

Second tier Bangladesh, courtesy of their joyous victory over England finishing in fourth position in that group and therefore qualifying for the quarter finals.

In Group B, the United Arab Emirates were last of seven, while second tier Zimbabwe finished one off the bottom. Ireland performed mightily, winning three of their six pool matches, but just failed to get over the line, and finished fifth in the group.

Thus, the qualifiers for the quarter finals are the top four in each group. New Zealand will play the West Indies in Wellington, Australia will play Pakistan in Adelaide, South Africa will play Sri Lanka in Sydney and Bangladesh will face a mightily steep slope, up against India, top of Group B with six from six victories, in Melbourne.

So, the Cricket World Cup is approaching its climax and, while I try to never make predictions as I’m invariably wildly wrong, when it comes to sporting outcomes, I am going to pick India and New Zealand to play in the final, with the winner of that too difficult to pick due to the phenomenally good form of both outfits.

Both the Kiwis and the Indians have so far won six from six so, if this is the final game, it could be a final to remember.

As for the football field, while the likes of the Bombers, the Roosters and the Hawks will be lacing up the boots and getting out on the paddock, I will be tuning into the women’s Aussie rules pages to see how Jacana got on against the Sunbury Lions in the West division, and if the Brunswick Renegades managed to deal with those perennially thorny opponents the Port Melbourne Colts.

Well done all those who get out there and punt the pill for women’s Aussie Rules.

I’d dearly love to see Tony Abbott try a shirtfront here; I'm pretty sure who we'd see end up on the floor.