Four Corners on Lawler and Jackson: Car crash TV at its finest

Last night's Four Corners was not a puff piece, but nor was it full of revelations — instead it was car crash reality television at its finest, writes Peter Wicks.

Last night’s episode of Four Corners had all the anticipation of a heavyweight title fight — and for good reason.

It was viewed as a last ditch attempt by a pair of rich people living in luxury to escape the long arm of the law as it draws closer.

While the main attraction may have been the alleged Queen Of Corruption, Kathy Jackson, in last night's show it was her partner Michael Lawler’s time to shine.

Michael Lawler, whose involvement IA readers have been aware of since 2012, is the current vice president of the Fair Work Commission (formerly FWA). Appointed to his position by Tony Abbott, the FWA became notorious for the lengthy investigation into the HSU — which was really the investigation into Craig Thomson, Lawler’s partner’s predecessor as secretary of the Health Services Union. Thomson, of course, was also a crucial member of a hung parliament who, if forced out, could have made the man who appointed Lawler prime minister.

Hmmm, no conflict of interest there…

As a result, Craig Thomson was driven to breaking point emotionally and smeared in the press and still remains a punch-line for allegations he was eventually found not guilty of — apart from over a trivial amount.

Last night confirmed what I have often said about these people — that they spend their time in an alternative reality. This "reality" is one I usually refer to as “Jacksonville”, although on occasions I have described the alternate state of Michael Lawler as “Lawler Creek”. Now it appears to have dawned on the man in question that he may just be up that creek without a paddle.

The remarkably healthy looking Lawler we watched last night has spent nine months on fully paid sick leave. This was at the taxpayers' expense, at the remarkable rate of $435,000 a year.

Last night, as the law closes in, Lawler decided to once again take the taxpayer for granted by using the taxpayer funded ABC to plead his case.

“This is the secret video diary of a desperate man.”

What is it with these people and sponging on the taxpayer?

The spin began even before the episode started with a teaser by Four Corners, with a voice-over claiming over a video of Lawler speaking to camera:

This statement was in direct conflict with the facts already confirmed by Four Corners and certainly gave an indication of what may be to come.

The arrogance of putting together a five-hour monologue in your own defense is astounding. Save it for the coppers, Michael, I’m sure they have subpoenaed a copy by now at any rate, watched it, had a good belly laugh and filed it away as evidence.

The alternate universe the pair live in was clearly on display last night, with lots of cringeworthy moments that no doubt had viewers dry retching across the country.

Many had expected a puff piece for this episode, as that is the way it appeared to be set up, being embedded in their home. However, while I'm sure Lawler and Jackson agreed to provide access to Four Corners to film the piece in the hope it would end up taking their side, instead we ended up with a fly-on-the-wall piece on a delusional, self-centred and arrogant pair of people who think they are smart enough to fool the public through the media.

In the episode, Michael Lawler denies he has ever “knowingly” benefitted from the proceeds of crime — that being fraud from the HSU. However, he makes that denial whilst sitting in room in the multi-million dollar house he resides in, which was purchased by his partner Kathy Jackson, in part with funds allegedly fraudulently acquired at the expense of HSU members. A house that the couple attempted to transfer into Lawler’s name to avoid Federal Court forcing its sale to pay back to the members.

At the time, Jackson claimed the transfer was to repay Michael for his personal and legal support. The legal support being to protect what he only now realises was criminal behavior, if we are to believe his “unknowingly” claim.

Lawler thinks the public will understand him taking time off to care for his partner. He is right about that — we would understand if he was doing what the rest of us would do, take holiday leave, long service leave, or, if necessary, unpaid leave. Nobody I know of would think it was in any way moral to expect the taxpayer to foot the bill for a $400,000+ per annum salary to look after one's partner. It’s not as if his partner cured cancer or anything. In fact, she allegedly defrauded cancer researchers of money owed to them while misappropriating the lowest paid union members funds' of over a million dollars.

I hope Lawler will forgive us mere mortals if we are a little less than approving of this conduct.

It has also been brought to our attention that Lawler likes to record conversations without the consent of the other person. This, from a member of the judiciary, is something that many will find highly alarming given its highly questionable legality.

Realistically, Iain Ross does not set the rules regarding leave — these would be based on Lawler's original contract, which would have been negotiated with the Howard Government when he was appointed by Tony Abbott. The Howard Government was, interestingly, also responsible for the appointment of his brother John Lawler as CEO of the Australian Crime Commission.

Whether or not Michael Lawler was entitled to the leave, it shows a lack of judgement and common sense at the very least to take sick leave to help your partner defend herself from criminal allegations.

As we know, Michael Lawler is the subject of an independent inquiry which was announced recently by Employment Minister Michaelia Cash.

Yesterday, the terms of reference for that investigation were released: 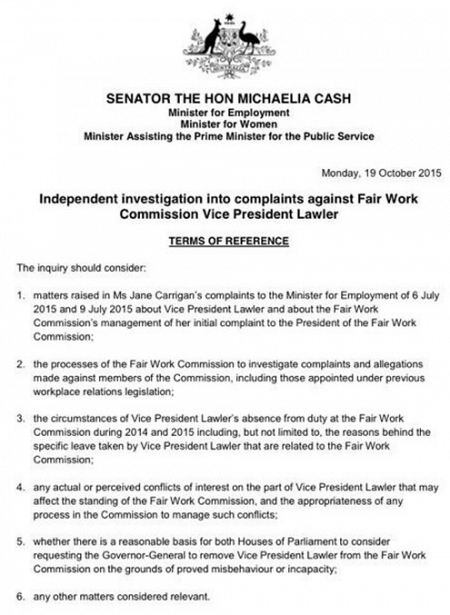 I think Lawler may have a tough time ahead based on those terms.

Lawler is hoping, I suspect, that we will sympathise with him due to his claimed mental issues. He expects this while we listen to him berating and abusing an elderly dementia sufferer, David Rofe QC, whose money he has been spending. I think he has high hopes.

Those who were expecting revelations would be disappointed — there was very little that we or others had never aired before; those wanting a peek into another sense of reality, however, would have been delighted.

The big news of the night was Lawler using the term "c*nt-struck" and the ABC letting it run.

There will be more to come on this from me soon, after I have analysed everything in more the detail.

In the meantime, congratulations to Caro Meldrum-Hanna and the Four Corners team on a riveting piece of television.

The vulgar pinnacle of a bizarre Four Corners with Kathy Jackson and Michael Lawler: Just when you thought Fou... https://t.co/yTlkeZCjcA