As State, Federal and Local Governments continue to sign off on corporate developments that will see koalas (and other wildlife) completely wiped out, the mainstream media look the other way and public consultation processes continue to tighten, writes Sue Arnold.

As governments increasingly insulate themselves from any communication with activist communities, there’s a deep and growing sense of unease that Australia is, in effect, experiencing a coup d’etat by massive corporate interests who now control the destiny of this country.

Combined with an almost complete failure of mainstream media to hold the government and politicians to account, the traditional role of the Fourth Estate is a distant memory.

The most prominent shutdown by governments appears to be directed at environmental issues. In particular, the plight of the koala, other species of threatened and endangered wildlife, the wholesale clearing of native vegetation, endangered ecosystems as well as massive, unchecked land clearing and destruction of native forests in Queensland and NSW.

A common theme of concern is the complete refusal by government ministers to respond to any communications. The destruction of koala habitat at Ballina where the Woolgoolga to Ballina Pacific Highway upgrade is under construction by the Roads and Maritime Services (RMS) has been a focus of many community and conservation organisations. The buck stops with NSW National Party MLA Melinda Pavey in her capacity as Minister for Roads, Maritime and Freight.

But protests to the Minister are well nigh impossible, as they can only be sent via social media or using a form provided on her ministerial website which states:

'You can send the Minister for Roads, Maritime and Freight, Melinda Pavey, a message by completing the form below.'

An email for her electorate office is available, but only members of Pavey’s electorate are likely to get a response.

No email is available for this Minister or for any other NSW State ministers. Ironically, Pavey is a resident of Bellingen, the North Coast’s heartland of one of the few remaining koala colonies in NSW — an area where a major battle has recently taken place over the Forestry Corporation's proposal to log yet more native forests that are known koala habitat. The same area where a massive effort to create the "Great Koala Park" has been waged for several years. It would be difficult to assume that Pavey is ignorant of these issues.

Given the immense destruction by the RMS of koala habitats, endangered ecosystems, countless numbers of threatened and endangered species, as well as old growth forests as the Pacific Highway upgrade continues its destructive path, Pavey's failure to respond to important scientific and environmental criticism and concern is shocking. Her lack of any focus on the environmental impacts smacks of appalling ignorance or a deliberate refusal to countenance the irreversible damage which will be inflicted on the critically important biodiversity of the North Coast.

Prior to becoming a politician – according to her website – Pavey worked as a reporter in radio and television, and was an advisor to (former) deputy premiers Wal Murray and Ian Armstrong when the Nationals were last in government. The location of her work as a reporter is not revealed, but her latest efforts appear to have been with the News Corp publication Coff's Coast Advocate. This may be where she learned to shape policy and biased journalism.

Ms Upton worked as a solicitor at Sydney firms Freehills and DLA Piper and as a Wall Street investment banker at Deutsche Bank — hardly appropriate credentials for an environment minister. She was previously Attorney General in the Baird Government and is the member for Vaucluse. Her continuing refusal to engage with conservation organisations or to inspect the massive damage which is being created as a result of the Biodiversity Conservation Act and the Local Land Amendment Act defines her role as nothing more than a hard-nosed businesswoman.

Conservation organisations in NSW are appalled by the complete failure of both these ministers to engage, hold meetings, respond, or communicate with the public.

Requests to NSW Premier Gladys Berijiklian for meetings, delegations, responses to letters and submissions can also only be made via a form on her website. The usual response which may or may not arrive months later is "the Premier is too busy".

Letters to NSW bureaucrats, compliance officers and legal sections remain unanswered, or brief letters are sometimes sent out by obscure politicians promising reports on investigations which never transpire. Nor does the mainstream media press politicians for answers.

A major complaint submitted by the Environmental Defenders Office NSW on 24 July to Minister for Planning Anthony Roberts, on behalf of Australians for Animals Inc, in relation to the Ballina Pacific Highway upgrade was responded to on 31 August by Parliamentary Secretary for Planning Scot MacDonald.

'The Department is currently investigating the issues raised by Australians for Animals Inc. I will advise you of the outcomes once these investigations are complete.' 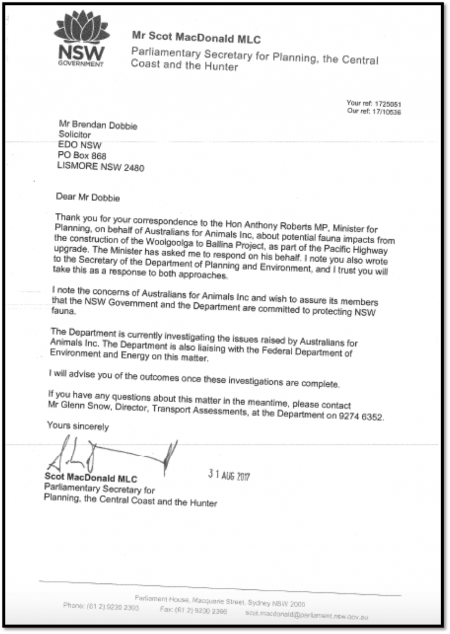 No outcome or any further response has yet been received.

At the Federal level, things are no better.

A lengthy complaint from the Environmental Defenders Office to Environment Minister Josh Frydenberg dating back to 25 July, received a response on 7 August indicating:

Once the investigation is finalised, the Department can provide you with a summary of the outcomes. This is consistent with regulatory practice. 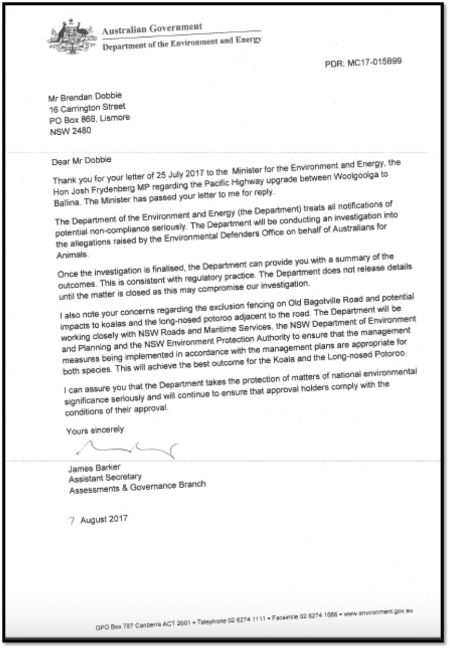 Reply to Environmental Defenders Office NSW from Department of Environment and Energy (Supplied).

No summary has yet been provided in spite of a number of requests.

Minister Frydenberg has no focus on koalas or wildlife. His first action in taking over the Ministry from Greg Hunt was to sign off on the "Ballina Koala Plan" and the "Koala Plan of Management" for the Pacific Highway upgrade. Both plans have been heavily criticised by scientists as completely incapable of protecting koalas, with the most likely outcome the extinction of  Ballina koalas — a nationally designated "important population”.

Minister for Trade, Tourism and Investment Steven Ciobo represents the Federal electorate of Moncrieff, which includes Gold Coast suburbs. His website details 20 years of him living on the Gold Coast and past history of family involvement in the tourism industry.

The Tourism Australia website list of places to see koalas in the wild reflects the paucity of animals.

Yet Ciobo promotes the koala as the icon of the Commonwealth Games 2018 to be held on the Gold Coast.

A recent media release by conservative think tank, the Institute of Public Affairs (IPA), has claimed an increase in the number of species listed as "threatened" is holding back regional development. IPA research fellow Morgan Begg said that since 1992 the number of threatened species had increased 63 per cent and was stopping development and investment in regional areas.

The current trajectory of threatened species listing is unsustainable, and places significant costs on development and growth. These costs are disproportionately paid by regional Australia, which hosts the bulk of Australia's native wildlife.

Centralised environmental law, including the threatened species regime, facilitates "green lawfare"  — which has cost the Australian economy as much as $1.2 billion in delays since 2000.

Apparently, the IPA places no value on wildlife, healthy ecosystems, oxygen and the continuation of life on Planet Earth. Their mates in governments at all levels clearly support these sentiments.

Koalas are in serious decline, on the brink of extinction https://t.co/zccimRXxH2