ON 2 AUGUST last year, Independent Australia published the first of a series of articles in its long-running investigation into lawyer and self-proclaimed wealth guru Dominique Grubisa.

In that article, IA exposed that Grubisa’s parents who were struck off the roll in 2012/2013 respectively had still been providing legal advice. The article also reported that Mrs Grubisa’s father had also been gaoled as a result of his legal work.

In a strongly-worded concerns notice received by Independent Australia on 5 August 2020, the lawyer’s solicitors claimed Mrs Grubisa had denied:

‘… ever having employed her parents to provide legal advice to her students and clients.’

It was a claim repeated by Grubisa herself on 27 November 2020 in a letter to five-time Walkley award-winning journalist Richard Baker, about an article he had just published in The Age.

In that letter to Baker and The Age, Grubisa stated:

'Each of DG Institute and I deny that my parents, Maria and Chris Fitzsimons have ever been engaged or employed by DG Institute or any of its associated entities for the purpose of either of them providing legal advice to students of DG Institute. My parents merely provided me with administrative assistance for a short period, several years ago.'

However, documents obtained by IA show that her father was providing legal advice to her clients as early as 2014. Other documents show legal advice being provided by Grubisa’s mother, Maria Fitzsimons.

Not only was Chris Fitzsimons providing legal advice using the alias Chris Jackson, but he was using an email account that included the name of the law firm that acted for him in the proceedings when he was struck from the roll. That firm, which at the time was known as Lyons & Lyons Solicitors, now trades as Murphy Lyons Lawyers. That email account was also used by Grubisa’s mother, Maria Fitzsimons, to provide advice to clients of Grubisa.

The principal of Murphy Lyons, James Lyons, has confirmed his firm had no involvement in the advice given by either "Chris Jackson" (AKA Chris Fitzsimons) or Maria Fitzsimons using the email account that included the former name of his firm. Mr Lyons also confirmed that neither of Grubisa’s parents was ever employed by his firm.

Documents obtained by IA include emails from another email account used by both Grubisa and “Chris Jackson” to provide advice.

Correspondence from July 2014 from “Chris Jackson” to a client of Grubisa includes advice in relation to the preparation of an affidavit, suggesting removing solicitors from the court record and advice regarding caveats. A subsequent email from Grubisa to the client refers to “Chris” passing the email on to her for comment.

Rule 17(g) of the Queensland Bar Association Rules of 2011, provided that:

‘A barrister must not ... conduct the conveyance of any property for any other person.’

One wonders, then, why “Jackson”, a struck-off lawyer working with his daughter – herself then supposedly practising as a barrister – would say in an August 2014 email:

‘We haven’t done a transfer because of the slow rate at which this transaction is progressing.’

Why were they drafting conveyancing documents, when neither Jackson nor Grubisa was entitled to undertake conveyancing services at that time?

In October 2016, messages providing legal advice to clients of Dominique Grubisa were sent by Maria Fitzsimons, using an email account that included the name of Lyons & Lyons. At around the same time, Mrs Fitzsimons allegedly attended a meeting at the Department of Natural Resources representing a number of Grubisa’s clients claiming to be a solicitor in Grubisa’s firm.

Prior to publishing his first story about Grubisa, Richard Baker put to Grubisa why her father used the pseudonym "Chris Jackson".

‘As for the use of the pseudonym Chris Jackson by Mr Fitzsimons, this is not a matter upon which either DG Institute or I can respond to and is a matter for Mr Fitzsimons.’

Since “Chris Jackson” was providing advice to her clients, it would seem a matter to which she could and should respond.

Grubisa has, in fact, responded to questions about the involvement of “Jackson” in the past. A letter from a Sydney-based law firm to Jackson, via Grubisa’s office, sought comment about the withdrawal of a caveat supposed signed under the hand of "Chris Jackson".

Grubisa responded to that letter on 5 February 2018, saying:

‘Chris Jackson has confirmed that the signature on the document is not his.’

The caveat in question was supported by a statutory declaration sworn on 23 May 2017 under the name of “Christopher Charles Jackson”, of 19 The Sovereign Mile, Paradise Point, Queensland. It was purportedly witnessed by Dominique Grubisa.

But the Paradise Point address is not that of Chris Fitzsimons/Jackson, but rather that of the sole director of Unity Funding Pty Ltd, Dale Wilkinson.

‘Ms Grubisa also said she had never witnessed any statutory declaration by her father using the name Chris Jackson or containing any false information.’

So, unequivocally, either Grubisa lied to The Age or “Chris Jackson” forged her signature.

In relation to the transaction in question, in a letter dated 12 May 2017, signed under the hand of “Chris Jackson”, Mrs Grubisa’s father stated he had been acting for Unity Funding for the past three years. Chris Fitzsimons was struck off the roll in 2012.

Of course, that deal was far from “Jackson’s” only involvement with Unity Funding. On 20 February 2017, “Jackson” was signing letters on Grubisa’s letterhead regarding loan documents for another transaction involving Unity Funding, regarding property in South Australia.

For that transaction, Grubisa’s letterhead displayed her address for correspondence as a Post Office Box in Potts Point — not something that features on correspondence from Grubisa herself. 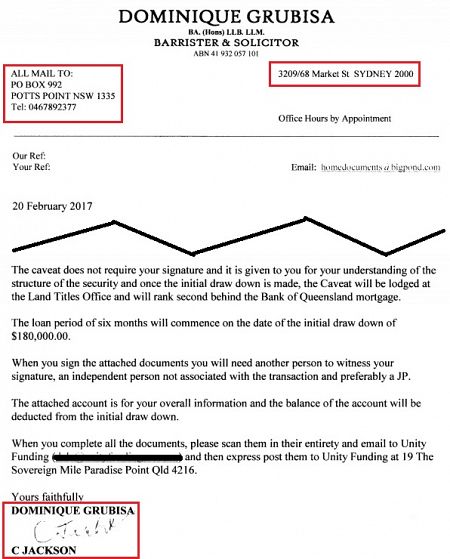 Correspondence from Grubisa eight days later, concerning a different matter, signed under her own hand, had a quite different address:

In addition, the mobile number on the first letter was not that of Mrs Grubisa, but rather Chris Fitzsimons/Jackson.

The proceedings that led to Grubisa’s mother being struck off the roll, surprisingly enough, focused on a PO Box in Potts Point and banking a cheque collected from it.

The Tribunal, in that case, found that:

Based on the evidence before us, we find that the Principal [Chris Fitzsimons] flew from Sydney to Cairns on a flight operated by Virgin Airlines on the afternoon of 29 November 2005. We do not accept his evidence that he returned to Sydney on a Qantas flight on 2 December 2005 and that he proceeded from Sydney Airport to Potts Point Post Office, where he obtained the cheque for $603,000 and then walked to the Commonwealth Bank's Branch at Potts Point and deposited it, thus misappropriating the money.

It continued its findings:

'The Tribunal is comfortably satisfied based on the evidence before us that more probably than not it was the Solicitor [Maria Fitzsimons] who completed the deposit slip and deposited the cheque into the joint account on 2 December 2005.'

Is the PO Box on Dominique Grubisa’s letterhead the same ill-fated PO Box of her two-named father? IA very strongly suspects it is.