AUSTRALIA’S Diamonds national netball team, along with the top flight women basketballers, The Opals, have both been in commanding from over the past week.

The Opals started the tournament well with a 90-57 defeat of Cuba, then dealt with Korea Republic, 87-54, before finishing their group games with a near doubling of Belarus’ score — 87-45.

This placed the Opals first in their group and they move into the quarter finals against Canada.

If the Opals can overcome Canada, they then face the powerful Chinese team in the semi final, with victory there seeing them through to the final against the USA — providing the powerful American outfit make it through, as they should.

The USA have already been in commanding form so far throughout the tournament, being so far undefeated. They walloped China 87-56 in the opener, then Serbia 94-74, before playing like Angola weren’t on the court — winning 119-44.

As always with basketball, the measure of your nation’s quality is how they perform against the USA.

So go Opals! First go to the final and then go on and win against the USA.

On the other indoor court, the Diamonds were in commanding form against the Silver Ferns of New Zealand in the opening match of the Constellation Cup, played at Invercargill in New Zealand.

The Australians led at every break and finished things off to win 59-42.

I tuned in to watch and... well…. I wasn’t sure what to expect. Like so many male sports journalists in this country, I am not overly familiar with netball — however, rarely have I seen such intensity in a sporting fixture.

New Zealand, as is well known, love beating Australia at anything and so they were up for the fight. The Diamonds went in swinging as well. Every ball was contested, as if the winner got to destroy the loser’s country with orbiting nuclear weapons.

Further to the intensity story was an incident in the third quarter, with the Ferns attacking and powerful New Zealand striker Cathrine Latu and Diamonds’ defender Julie Corletto tussling for the ball. Latu got a full-arm grapple going and lifted Corletto bodily off the ground. There was no malice in it, just two competitors going full bottle for the ball. Corletto was raised waist high, then hit the deck, free falling from a metre up. She wasn’t injured and the two went back to the contest without rancour, however it highlighted, literally, the white-hot passion the two sides brought to the match.

Sadly, I couldn’t find a high quality picture of this, but was able to download the following screen grab from the highlights package on the Diamonds home page: 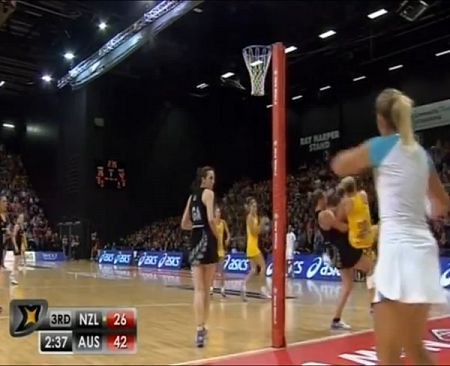 I wasn’t able to catch up with Diamonds’ coach Lisa Alexander, due to cross-Tasman contact difficulties, but hope to ahead the upcoming second match of the Constellation Cup, at home, in Melbourne, on October 8.

Now, I don’t particularly want to become one of those crusty old guys always moaning about the state of the modern game, but as you’re about to see, I think I have become that.

When I was a boy growing up in country NSW, grand final day was a highlight. You would wait all day until three pm, when battle would be joined, then watch avidly. At half-time you would go out in the street with your mates and try to recreate some of the moves you had seen in the first half. After ten minutes of that, you would return for the second half, then at the end of the game, go out and play for another half hour or so until dusk fell.

It was a genuine family-friendly event, the daytime grand final and, while Dad may have had a few beers, it wasn’t the all-consuming, let’s-get-as-drunk-as-possible event that it is now.

The match is played at night, in my opinion, because of TV ratings and, by extension, alcohol advertising, and is another symptom of the league’s unquenchable desire for more and more money.

Another hurdle for the league loving family is distance.

Night games, at Stadium Australia, are most unfriendly. The grand final game kicks off at 7.20pm and thus is slated to finish, if there is no extra time, at 9pm. Stadium Australia is a longish trek by public transport and so any family that wishes to go to the game, if they can afford it, will leave the stadium at 9pm or later, then have to get home and the kids into bed.

So, I’m against night matches, deeming it another of rugby league’s nose-thumbings at the family ‒ and non-drinking ‒ league fan.

Further to that, Channel Nine’s coverage starts at 1.30pm — that is six hours before kick-off. That means alcohol advertising will be on the screen from then on; I conjecture that, the first alcohol ad during last week’s Aussie rules that I saw was at 1.23pm.

The gates open at the stadium at 1.25, with all of the following police units being brought in to maintain order (taken from Police Media):

Now the heightened terrorism threat is part of this, for sure, but the Police Media release makes most mention of the threat of alcohol, with South West Metropolitan Region Commander, Assistant Commissioner Frank Mennilli, saying this:

“We will not tolerate alcohol-fuelled violence or any anti-social or unsafe behaviour.”

So, my point is simply that it is beyond crazy for Channel Nine to be urging us to have a drink from 1.30 onward, while the tax-payer picks up the bill for security for the event.

There is, however, an upside: HG and Roy will again be broadcasting.

Their broadcasts are entitled, “The Festival of the Boot”, with the Aussie rules grand final being Part One, while the league, a week later, is Part Two. They also have a theme each year and this year’s is, as mentioned last week:

“Every time Wayne Carey starts talking, I go out and have a dump.”

Wayne Carey, for those interested, was the former North Melbourne captain who, while being a great player, had serious problems. He was involved in some unsavoury, alcohol-related incidents during his career; the scandals section of his Wikipedia page is, for instance three-quarters as long as this whole article. In all, I consider him the wrong side of arrogant, so could really see Roy’s point.

Carey, by the way, was probably best known for having an affair with the wife of team mate Anthony Stevens — hardly an activity likely to engender team harmony and a beyond stupid and thoughtless thing to do to a friend.

So, while most are hoping that the Rabbits can win their first title since 1971, I will of course be not really caring who wins, but simply enjoying HG and Roy giving the league the treatment that makes the Nine commentary team, led by Ray Warren, sound like what it is — witless, moronic, and as interesting as a slow motion replay of paint drying.