Cycling and the principled David Pocock

Cycling dominated sport this weekend – at least the corner in which I took an interest – with women’s road racing in California and the men getting underway in the Giro D’Italia along the picturesque shores of the Mediterranean.

However, before we go to the sun drenched shores of both Europe and North America, it is worth noting that once again David Pocock is showing his leadership again. Pocock is a rugby union player for the ACT Brumbies in the Super 15 Rugby, and also for Australia.

He has an impressive record of caring for other humans on this planet, encompassing hunger, environment, and now gay rights and homophobia in sport.

In Africa, Pocock set up the Eighty Twenty Vision foundation to assist with community development in his native Zimbabwe. The Eighty Twenty Foundation is focused on allowing communities to become self-sufficient, particularly in the area of hunger, but also with disease.

Hunger affects a third of those in Zimbabwe, additionally diseases like HIV/AIDS are still sadly prevalent, all of which the Eight Twenty Foundation works hard to combat. Additionally, a large number of women and girls can’t get adequate health care due to complications of pregnancy and birth. Water is sub-standard with many not able to easily access potable water and the school system is inadequate in parts of Zimbabwe.

All of which Pocock’s charity, which he leads with wife Emma, works to improve.

You’d think that would be enough for one couple’s life time, just combating these issues, but no, Pocock also took a stand on the environment, joining farmers in the north west of NSW to fight against coal mines destroying agricultural land. And now he is fighting the good fight for gay rights.

Pocock was playing in a rugby match against the NSW Waratahs when an opposition player used the term “faggot” as an insult. Pocock stopped the action and called the referee’s attention to the incident.

Pocock’s line was that you can insult the other team all you like, but don’t use terms that are derisive of a group because of their sex attraction. The offending player has since apologised and is genuinely remorseful, which is a good sign. One can’t help feeling that this remorse indicates that, even in such a macho male dominated world as professional rugby, the human rights message is getting through.

It’s great to see such leadership from Pocock on and off the field.

And so moving on to cycling, where the top flight female riders are in California and have completed the Tour of California, with the graphics showing the attraction of road racing for the spectator. Few sports can showcase this beautiful Earth as road racing can. 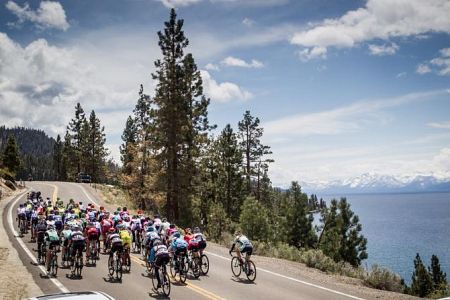 Cycling the shores of Lake Tahoe during the Women’s Tour of California (Image via Jon Devich / cyclingnews.com)

The three stage race was won by German rider Trixi Worrack of team Velocio – SRAM, Canada’s Leah Kirchmann of Optum was second, five seconds behind, while US rider Lauren Komanski of Twenty 16 was third, a further second back.

I might add that just showing the beauty of this event was, for instance, the mere names of the start and finish points for stage two, which were South Lake Tahoe to Heavenly Mountain resort. Certainly puts names like Brookvale Oval in its place.

The male event of the week was the Giro D’Italia, which literally translates into English as the Tour of Italy. With the Tour De France, and the Vuelta a España, make up the big three of road racing’s grand tours.

The event began this year with the team time trial. This stage was won by Australia’s team, Orica Green Edge (OGE). OGE recorded a time of 19.26 for the 17.6 km course, a micro burst of sustained team sprinting. OGE’s team leader Simon Gerrans therefore took the race lead from this stage and donned the leader’s Pink Jersey.

The Pink Jersey originates from the colour of the newspaper within which the Giro’s results were first recorded. Gerrans’ Australian team mate, Michael Matthews also won the lead in the Young Rider Classification in this first stage, and thus wore the White Jersey signifying this category.

Stage two of the Giro was from Albenga to Genoa, along the shores of the Med, a distance of 177 km. A largely flat stage saw the sprinters come to the fore, and was eventually won by Italy’s Elia Viviani for Team Sky, from Moreno Hofland of Team LottoNL-Jumbo, while the “Gorilla”, Germany’s Andre Greipel of Lotto-Soudal got home for third.

After the second stage, Matthews takes the Pink Jersey courtesy of finishing ahead of Gerrans on the stage. Gerrans maintains second place in the General Classification, while it’s Australia one-two-and-three with OGE team mate Simon Clarke third.

For the sprinters, Viviani, courtesy of the stage win, dons the Red Jersey, while Italian Marco Frapporti of team Androni Giocattoli-Sidermec is second and Hofland is third.

The King of the Mountains leader wears a Blue Jersey in the Giro, and the few hilly sections of stage two saw Dutchman Bert-Jan Lindeman of LottoNL take the shirt, from Poland’s Lukasz Owsian of the Polish team CCC Sprandi, while Italy’s Giacomo Berlato of Nippo-Vini Fantini holds third.

Mathews of course holds the lead in the Young Rider category, from OGE team mate Estaban Chaves of Colombia, while Italy’s Fabio Aru of Astana is third.

So we’re off on the road with cycling, and the beautiful scenery of the Italian coast and mountains flashes by on our screens.

I scarcely dare even write it and tempt fate, but of course we wish for great racing, great scenery, but most of all, no drug scandals. 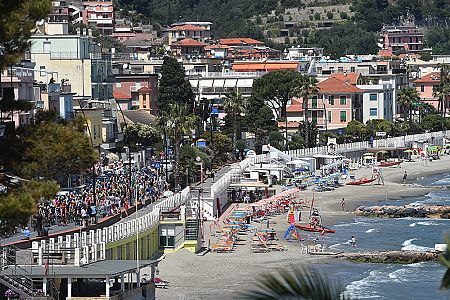 Along the Med in the Giro d'Italia (Image via velonews.competitor.com)

"If we say we're not accepting racism or homophobia, you have to live it out on the field" @pocockdavid http://t.co/cqbhjakNCD