The big weekend victory for the Cowboys NRL team provides another reminder that North Queensland – for decades the forgotten “Wild North” of Australia – has gotten bigger on the map.

Much of the attention is being generated by the great contradiction of the North, between movements trying to protect and restore the Great Barrier Reef and the drive for more coal mining.

The resident community has its own angles on the meaning of "North Queensland" (NQ), as set out by Dr Glenn Davies, in Independent Australia, in his astute history of the new State movement there, 'North Queensland is a State of mind'.

N. Queensland is a State of mind https://t.co/agrtxTVdoy @IndependentAus

argues constitutions single state of Queensland was a 'mistake'

A fair argument can be made as well, that North Queensland actually almost achieved a de facto statehood under the Whitlam Government, 1972-75.

In the welter of sweeping proposals of that administration, major work was done through public hearings throughout the country to define regions and prepare constitutional changes, to set them up between the levels of State and local government — taking over most of the identity and powers of both.

The idea was tied in with development plans for building new Australian cities — in fact, an urban-regional society. The best known nationally was Albury-Wodonga, straddling two state borders, but North Queensland would have been one of them. The scheme went out with the government of the day.

Where and what is this North Queensland?

Those being brought up there learn there is a North Queensland and also "Far North Queensland" (FNQ) divided off by an east-west line from around Cardwell, between Ingham, which is NQ, and Tully, which is FNQ — at least to many local people you meet in either place. Mackay was always the South-Eastern corner of NQ and Rockhampton the capital of Central Queensland, another world. (The rise of inland mining communities in Central Queensland, South of the Mackay district and orientated towards it economically has raised a new question about whether the NQ border might be shifted north to maybe Proserpine, but folks in Mackay might object to being in Central Queensland). There is a North-West Queensland sub-region as well, taking in places along the railway line to Mt Isa — distances are vast and it has its own sense of community.

This all seems to matter at a cultural level

The remoteness would have caused the chauvinism from the beginning. The beautiful landscape and the Reef, even while shared in extremely uneasy tandem with the Indigenous population, has always engendered pride. There is also a weird pride taken in living in hard country, which it is, especially in summer. For many years, the Taxation Office gave a large hardship bonus to all North Queensland residents and they could still mount a good argument for it.

NQ has as bad a history of racial abuse as anywhere. For at least a century since the proclamation of the colony of Queensland in 1859, Aboriginal North Queenslanders were made to live in remote settlements and kept out of the towns. Much of that is gone — for example, about ten per cent of people in Townsville now are of Aboriginal or Islander descent. Improvements don’t make it all go away but relations today are civil. There are many people in good colour-blind friendships who don’t see it as a racialist “Deep North”.

For the record, the North Queensland Cowboys professional Rugby League team, over the last month, has been showing how competition in sport can be better than ordinary life because of how miraculous turnarounds can happen.

A strong team but struck down this year by the loss of key players to injury (most famously co-captains Johnathan Thurston and Matthew Scott) the Cowboys just escaped elimination from the National Rugby League (NRL) competition. They squeaked into bottom eighth place in their finals series but then began a month of never-say-die wins against quality sides. It led them to the big win on Saturday night — 29 points to 16 against the heavily-backed Sydney Roosters. 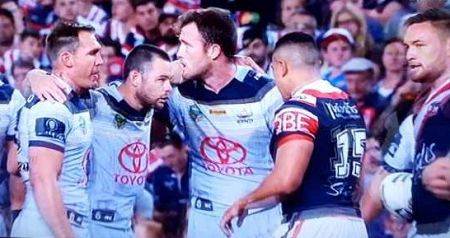 Cowboys taking it up to Sydney City Roosters (photo by Lee Duffield).

Astonished commentators reminisced on their arrivals at Townsville or Cairns for a game, agape at the displays of love and support around the football team: billboards featuring the players, cheering supporters, children everywhere in livery; much as in Sydney and elsewhere but there is definitely a high per capita commitment, showing off some strong sense of place.

Leaving aside the cultural aspects, it remains a struggle to see the NQ region doing better on its own as a state than as part of Queensland, for the one reason that local population remains small — still under 250,000 in 2017.

It is true that mining, tourism, grazing or the sugar industry would boom from time to time, but the history of Australian states does not show any of them saving up such windfalls for the common benefit, like that other small country Norway amassing its oil money for the future. The history of the post-colonial world instead throws up endless cases of small polities holding vast natural resources, getting bushwhacked by global corporations that cart off the proceeds.

Many North Queenslanders would recognise this difficulty, by sympathising with their development-deprived forbears who, up to 1960, in a major example, would drive a long way to see a bitumen highway. That alludes to the fraught story of the Bruce Highway, that links the region to the South.

Dr Glenn Davis is right to emphasise the travails of the “Marlborough stretch” or “horror stretch”, the quasi-passable dirt track which was the highway between Mackay and Rockhampton. Sometimes crossing it, especially in the wet, could be the stuff of legend.

Politics and economics combined to relieve that particular blight on post-pioneering civilisation. Labor governments had kept the bad roads going too long, partly through lack of funds and partly in favour of Queensland Railways, running a line parallel to the dirt track with its army of State employees. The Country Party (later Nationals), who took over in 1957, were more open to blandishments from the burgeoning road transport lobby, saw bitumenisation as a good direct benefit for farmers and so began a lot of road-making (which continues to this day — called infrastructure programs). 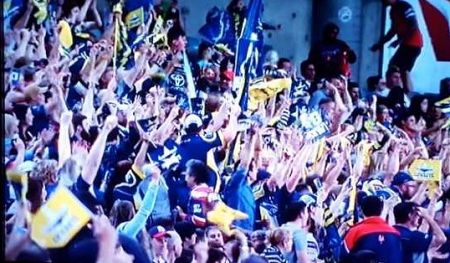 “Old” North Queenslanders of the bush track era would be exasperated, seeing the neglect of roads as themselves getting traduced by the “South”. Maybe those still alive will be taking extra comfort this week from the victory of the Cowboys — the worm that turned. The team has played a great part putting North Queensland on the map. If they turn around and astonish again by winning this Sunday’s Grand Final (their second in three seasons), outsiders from faraway NQ defying the odds once more, it will be cream on the banana cake.

Symbolically a hot wind was blowing down from the North ...

The PNG Hunters Rugby League side on Sunday won the Grand Final of the Queensland Cup at Suncorp Stadium in Brisbane.

Maybe two-thirds of the 12,000 strong crowd were Hunter's followers from PNG, who held out to see the winning try in the last minute of play, setting up an agonising wait for the final kick, before breaking out the flag.

They headed off the Sunshine Coast Falcons in the State inter-regional tournament, 12-10, getting two bonuses: they will take on the winners of the New South Wales Cup, as a curtain-raiser for the NRL Grand Final in Sydney, and the Queensland premiership win (after three years in competition) will add credibility to hopes of the Rabaul-based club, to eventually enter the Australian NRL.

Unless you count North Queensland as a "country", Papua New Guinea is the only country where Rugby League is the national sport.

Dr Lee Duffield is a former ABC foreign correspondent, political journalist and academic. He spent the first 20 years of his life in North Queensland and returns there often.

You gotta love a underdog team like the North Queensland Cowboys. Solid win.