SUBSCRIBE   DONATE LOGIN SHOP
SUBSCRIBE   DONATE
How we prevented a Morrison dictatorship
How Howard screwed the Libs
U.S. site tries to ruin what makes fairy bread great
Bloody Idiot of the Week — Episode 28: Get used to it
Morrison's 'politics of retribution'
Health

Several countries have learned what not to do during a global pandemic, some of them the hard way. Alan Austin reports.

EVERY DEVELOPED COUNTRY has lost lives to the coronavirus pandemic. No administration can boast a great record in responding to the global crisis. But some have managed it far better than others.

It will take years before we can draw final conclusions in all critical areas. But some lessons can be learned now. In countries still heavily impacted, heeding these immediately will save many lives.

Australia and New Zealand are among the nations which have fared better than most. Of the 51 very highly developed major countries, according to UNDP classification, 12 have kept deaths per million* inhabitants below six.

These nations prove that deaths in the thousands are not inevitable. In contrast, many rich countries have lost hundreds of citizens per million.

Among the worst-hit are these:

*As noted previously, we assume data is current and reliable, which may not always be the case.

One challenge in determining which actions worked and which didn’t is finding states we can validly compare. No two countries are exactly alike.

Two places which share many similarities are Australia and the American State of Florida.

Both have mostly wealthy, well-educated people either employed or comfortably retired, but with significant racial minorities and some poverty.

They are both a long way from the early epicentres – Wuhan, Lombardy and New York – so had time to see what was coming. 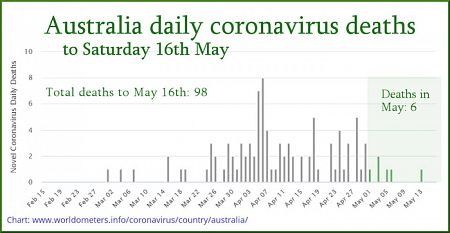 Comparing these two places may help understand the strategies which worked and those which didn’t. 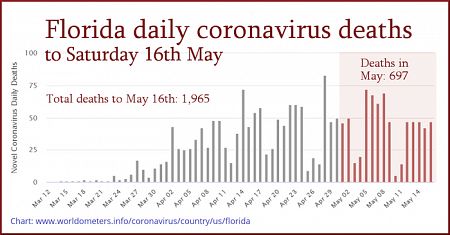 Already the positive steps taken by “successful” developed countries outside Europe are being identified. As are many mistakes made in the USA and Europe.

Several of these were highlighted in last Thursday’s testimony before Congress by the sacked leader of the Biomedical Advanced Research and Development Authority Dr Rick Bright.

“The window is closing to address this pandemic because we still do not have a standard, centralized, coordinated plan to take our nation through this response.”

“It [January 23 meeting] was one of our first meetings that we had about how to address the outbreak and because we had practice, I came in with my list of needs in those lists for money people and viruses. My request was met with a bit of surprise and puzzlement.”

“What we do must be done carefully and with guidance from the best scientific minds. Our window of opportunity is closing ... Without better planning, 2020 could be the darkest winter in modern history.”

“First and foremost, we need to be truthful with the American people. Americans deserve the truth. The truth must be based on science.”

“I pushed those warnings to our strategic national stockpile team who has the responsibility of procuring those medical supplies for our stockpile. In each of those, I was met with indifference, saying they were either too busy, they didn’t have a plan.”

“From my perspective ... viral samples are critical. As soon as we were aware that this virus could pose a significant threat to human lives, I began pushing for those virus samples and I met frustration and dismissal.”

“There was no action taken on the urgency to come up with a plan for acquisition of limited doses that remdesivir nor to distribute those limited doses ... I was told that my urgings were causing a commotion and I was removed from those meetings.”

“We need to facilitate equitable distribution of essential equipment and supplies.”

“The virus is here. It’s everywhere. We need to be able to find it, isolate it and stop it. We need to have the right testing for everyone who needs it.”

“We need to be able to trace contacts, isolate and quarantine appropriately while striving to develop a cure.”

“Working cooperatively with our global partners, we can and will succeed in finding a cure for COVID-19. But that success depends on what we do today.”

“We must increase the public education about the basics, washing hands, social distancing, appropriate face covering. They are simple but critical steps to buy valuable time until there’s a vaccine.”

These failures have cost tens of thousands of lives needlessly. Just ask the people of Florida.

Dr Rick Bright: "Without better planning, 2020 could be the darkest winter in modern history ... we have the world's greatest scientists. Let us lead. Let us speak without fear of retribution ... we need a national testing strategy." pic.twitter.com/63UiCK3QQc