Dominque Grubisa, the lawyer who has made millions by advising clients on how to make money via “distressed estates”, has been found to have a number of fake reviews promoting her business online.

Now IA can reveal that a significant number of reviews on the hugely popular question and answer forum Quora have been submitted by fake identities.

For instance, in a post on 13 January 2018, “Angeline Carnarvon”, a purported ‘Administrative Assistant at Civic Legal’, was full of praise for Grubisa’s DG Institute, even posting a link to its Facebook page. 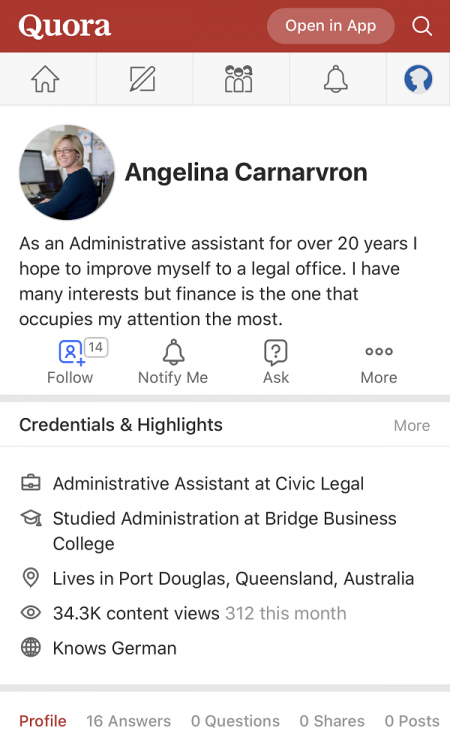 ‘Too many scams out there,’ wrote “Angeline Carnarvon”, unironically.

‘Looking at the reviews, I found a couple of bad one and a good number of positive ones. You always have people complaining. Overall, the impression I got was a trustworthy organisation...’ 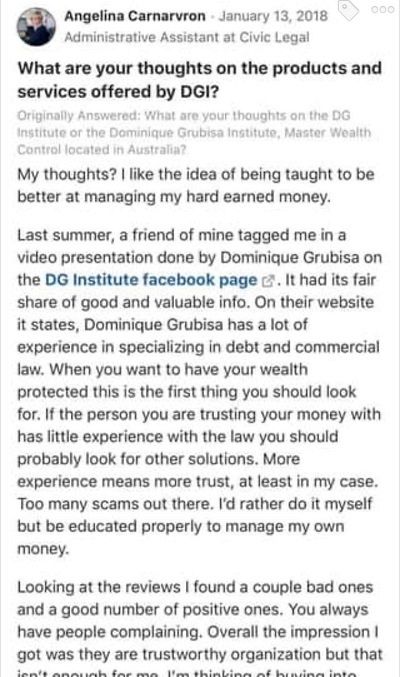 Independent Australia does not suggest either Ms Grubisa or her associates are involved in purchasing fake Quora reviews for her business or its products.

Independent Australia spoke to the managing partner of Civic Legal, who confirmed that “Angeline Carnarvon” has never worked at his firm.

Also, in her Quora profile, “Angelina Carnarvon” claimed to live in Port Douglas, North Queensland. That’s quite a commute from Western Australia! 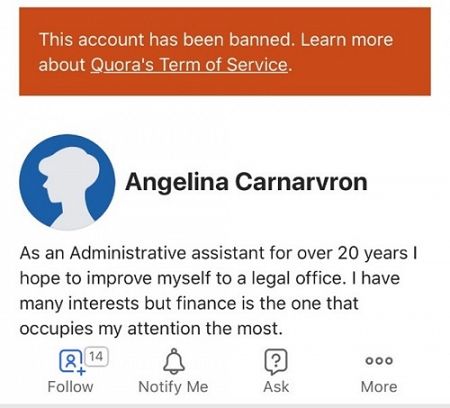 Angela Carnarvon has now been banned from Quora.

Then there was “Jack Morrison”, a ‘Manager at Real Estate’, according to his Quora profile.

‘Sometimes I wonder why people ask such questions on Quora,’ grumbled “Jack”. ‘Just Google DG Institute and you’ll find loads of reviews and such.’ 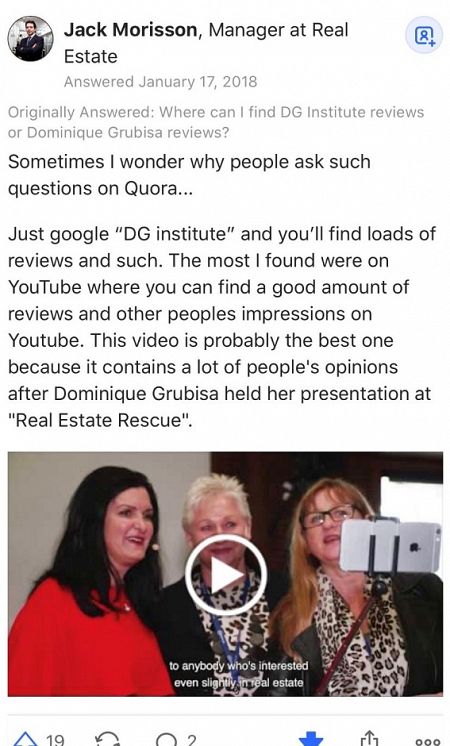 A reverse image search on this Quora identity’s photo in Google reveals it to belong to a man named Soly Halabi, who resides in the United States of America.

Mr Halibi confirmed to IA the Jack Morrison profile on Quora is fake.

Both IA and Mr Halibi applied to Quora to ban the profile, which it has now done. 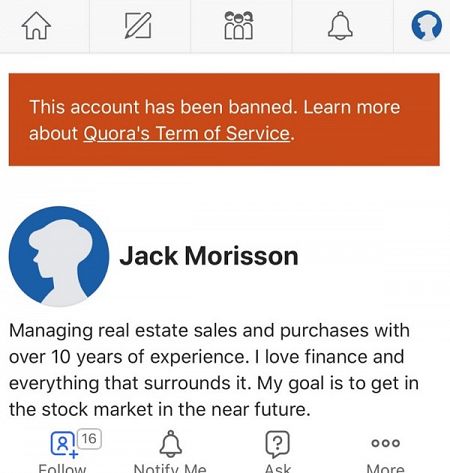 Now to Mary Dunn, who claimed to have spent 20 years in “baking” at the National Australia Bank and wanted to try something different — perhaps finance? 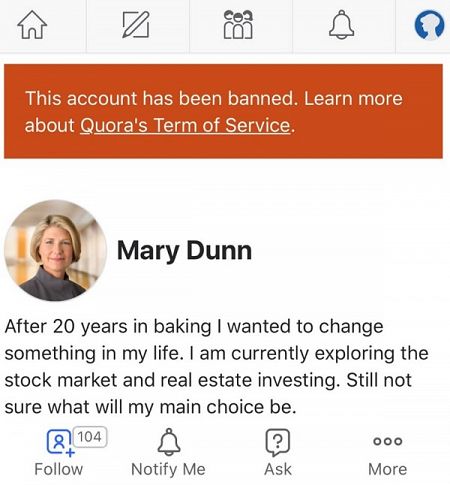 Like “Jack Morrison”, Mary liked what she saw on YouTube, where all she ‘could see was positive reactions’.

She ‘wouldn’t rush to conclusions,’ she said, but her ‘overall impression was great’. 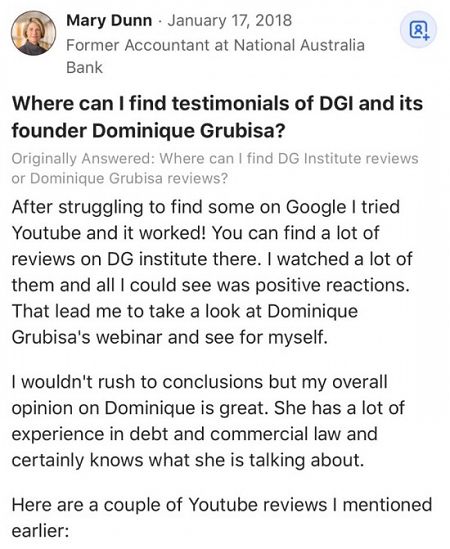 It was a feel-good review, spoiled somewhat by the photo being of Marcia L. Page — a successful fund manager in the good ol’ U.S. of A.

Mary Dunn's profile has also now been banned by Quora. 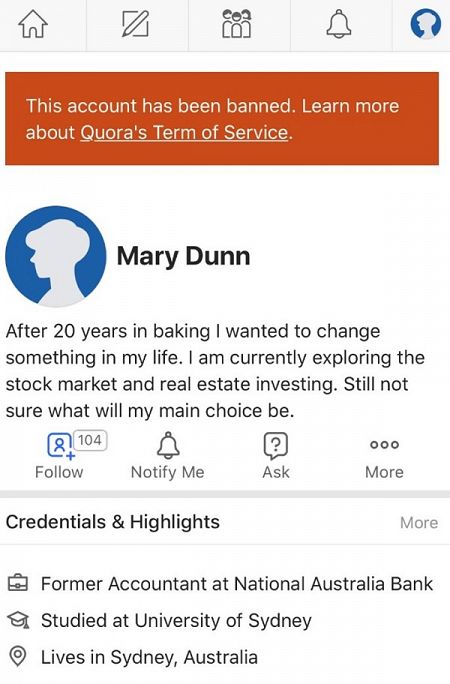 Back to the “baking”, Mary!

Another supposed Sandgroper, “Gyles” also claimed to be employed in the real estate industry, and said he was as an economics graduate from WA Uni. In addition, he had a huge number Quora content views, which added some credibility to his profile. 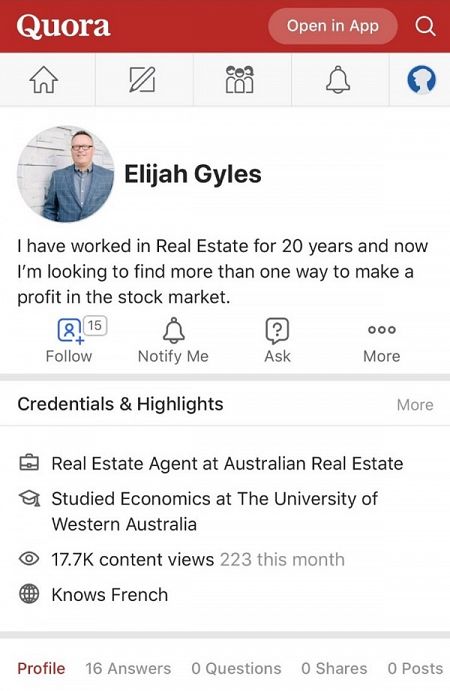 But no. This photo was of JD Erb, who was indeed a realtor — but in the USA, not WA.

“Elijah Gyles” has also been banned by Quora. 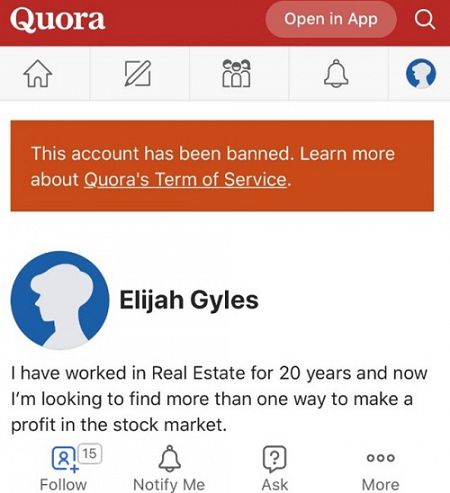 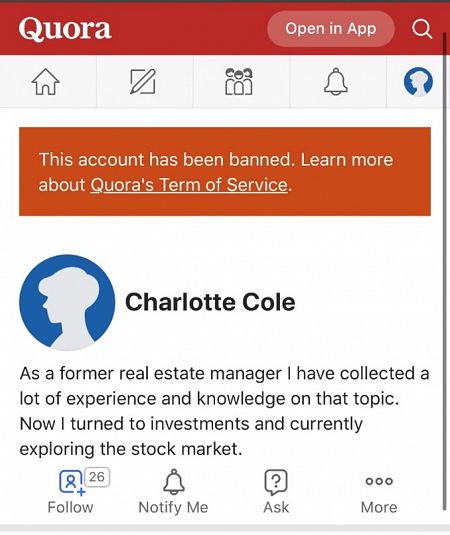 … and “Jesse Bayliss”, who claimed to be a ‘financial analyst of 15 years’: 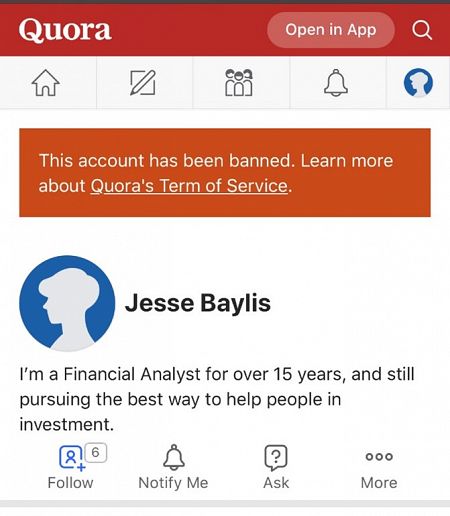 Both, of course, have now been banned after the efforts of Independent Australia.

Which just goes to show. You can’t trust anyone these days — except for the steadfast team at IA.