Cannabis and heroin law reform amidst the futile 'War on Drugs'

THE "WAR ON DRUGS", like the ones on terror, waste, poverty and crime, are metaphors for institutional failures to address fundamental problems in our society.

Aside from the fact that it is never clear when any of these “wars” will be over, it is also the rhetoric of a political failure to address social reform.

To date, the West’s pursuit of these wars has piled misery on misery — as wars are prone to do. Such wars ostracise the victims, casualties and collaborators in conceptual battles that have no actual target but certainly cause collateral damage.

The War on Drugs neither defines the problem nor allocates appropriate consequences for drug use. Moreover, this language does not improve the plight of those suffering. There is, though, a long historical process which led to the development of the three international drug treaties and the international drug control systems, for the more academically inclined.

What is a drug but an ingestible substance designed to have a physiological effect? From that perspective, the orange juice I had for breakfast, morning tea and lunch fulfils that description, as does the small white pill I then popped to alleviate the acidic reaction in my stomach that repeated orange juice consumption had created. Depending on what that pill was, government legislation may deem it acceptable or not.

The War on Drugs is usually framed to attack those substances any given society considers either illegal or "harmful". The mainstream media often frames drug addiction in terms of the consumption, possession or distribution of goods that legislators have outlawed.

However, that classification can of itself be arbitrary. For example, none of this captures the harm done by legal drugs — such as the prescribed opioid epidemic currently killing thousands of Americans (and making its way into Australia) or the ravages of alcohol and nicotine. Indeed, one of the key imperatives and justifications behind the push for law reform on drugs is that the classification of a “harmful" drug may not necessarily be based on any adverse physiological or psychological effect. Cannabis is a case in point.

Cannabis has a history as a medically demonstrable drug to treat disease. We have moved way beyond migraines, rheumatism and insomnia as the reason U.S. pharmacies in the 19th and early 20th centuries supplied the drug to patients. Strains of marijuana have been used to treat arthritis, asthma, bipolar disorder, attention deficit disorder (ADD), cancer, Crohn’s symptoms, dyspepsia symptoms and a long alphabetical list of conditions listed on the Medical Marijuana website.

But that increase in harm and death has happened under current drug laws, that’s why we need to do things differently. No one dies under safe injection sites and heroin assisted treatment.

There is, though, an enduring medical debate as to whether it does effectively treat these conditions. The reluctance of the Therapeutic Goods Administration (TGA), AMA and College of Physicians to approve medical marijuana is not based on the medical opinions expressed for treatment remedies in places like Canada. Canada provides access to medical cannabis to nearly 130,000 people, while the TGA in Australia has acknowledged only 140 people here.

Like our medical authorities, there was a time when Canadian doctors expressed their reluctance — as they did in a report in 2014. Three years later, the surge in demand for it as a medication has seen doctors evidently more comfortable with its efficient use.

Other examples of our recalcitrance in drug law reform is heroin-assisted treatment. As of August 2017, it will be 20 years since John Howard prevented the proposed scientific trial evaluating the effectiveness of prescription heroin, killing off six years of scientific research.

In the meantime, countries such as the United Kingdom, Switzerland, the Netherlands, Germany, Canada, Belgium and Spain have all demonstrated success with heroin-assisted treatment programs. Denmark has also agreed to a similar plan, although it started the program without running a trial.  Why still be running trials when you can review the results from everyone else? 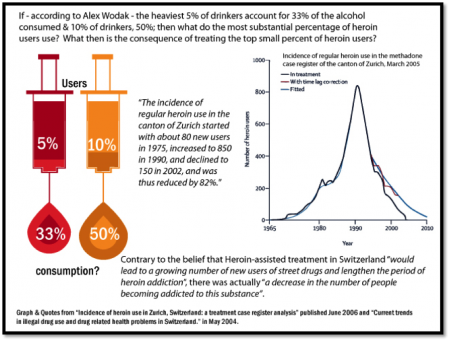 Assessment by healthcare staff of patients for heroin-assisted treatment (HAT) programs determines not only that a medical dependency on drugs but also that other approaches to wean them off this dependency have been unsuccessful. As such, it is not a first-line treatment but more often a facility of last resort and apparently a highly successful one.

Indeed, it is now not only made clear that HAT has been successful regarding mental health, physical health, social functioning and adaptability, but also that it has had economic benefits. HAT is cost-effective because the benefits exceed the costs. For example, the cost-effectiveness of the trials has been demonstrated in a substantial reduction in drug-related crime — and this is despite such programs treating barely five per cent of the heroin-using population.

Removing these addicts from the drug scene – in which other treatment programs have had limited success – has had a significant impact on the heroin market in the countries where such programs have been implemented. Evidence arising from these test programs has shown a disproportionate reduction in drug-related crimes and recruitment of new addicts. Switzerland, in particular, has been an example of this disproportionate change.

In a 12-year trial period in Switzerland, not only were there marked decreases in the estimated initial uptake of the drug – from 850 people in 1990 to just 150 in 2002 – but there was also a decrease in quantities of drugs seized. According to Director of the Alcohol and Drug Service St Vincent’s Hospital, Dr Alex Wodak, when outlining the most recent advocacy efforts in Canberra for this program in August, Australia is still only just discussing this as a possibility. It’s not even on the agenda in Australia now. 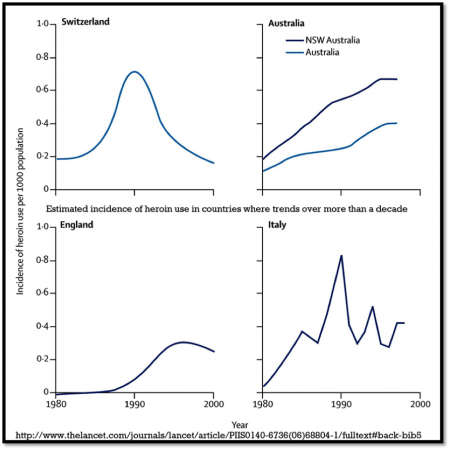 This isn’t the only area of drug law reform we are behind on, as evidenced by our responses to medically supervised injecting centres (MSICs). In early September, the Victorian Legislative Council reported on a review for a medically supervised injecting centre in Melbourne. The Victorian Government was then required to respond within three months, bringing it to December before we can expect to see any movement.

Unfortunately, the current Victorian Premier is on record as being opposed to a MSIC. Given that both the Victorian Government and Opposition have committed to positions competing on a commitment to toughness on drugs, it is expected there will be parliamentary opposition to this centre no matter who is in government. This is despite the fact that members of the local Richmond community and the media have come out in favour of such a facility. The group Residents for Victoria Street Drug Solutions has been particularly vocal in its support in media interviews with radio presenters Jon Faine and Loretta Gabriel.

So, the local community sees sense in it and Europe is replete with success stories arising from their trials. Nevertheless, Australia continues to play the cynical, probing but not willing to commit “rebellious teenager”, choosing not to listen to advice from the older culture.

We need to be decriminalising marijuana, making use of medical cannabis to improve health outcomes. We should be setting up medically supervised injecting centres to alleviate the harm drugs do to our community. Also, we should be treating the severely addicted through programs like heroin-assisted treatment.

The war on drugs has had a huge cost to our community and the collateral damage has been far greater than it ever needed to be. The war needs to end. Peace needs to reign. Drug use should be treated as a medical and social problem, not a crime. As they say in the surgical parlance, the procedure was successful, but the patient died. Time to try something else.

Just say no has been tried and failed every time. Join us in the real world. Medically Supervised Injecting Centres work in preventing death