Australia's biggest sports — and the footy

Lachlan Barker ambles through the world of Australian sport, looking at the giant sport of netball, as well as reviewing the AFL and League finals matches being played this weekend.

Some time ago, I was asked a sporting trivia question:

“Which sport has the highest participation rate in Australia?”

I mused for some moments and eventually answered “Soccer”.

It turns out I was sort of right, the correct question would have asked of ‘team’ sports. But my questioner then supplied the next most popular team sport in number of participants and this surprised me a little, as that is netball.

However, when I thought about it, it made perfect sense.

So I decided to check with the Australian Bureau of Statistics and find out what we do play for sport.

The most popular activity among Australians in 2011-12 (the most recent report) was walking for exercise.

Makes sense, anyone can walk, it costs nothing, and 4 million of us got out there that year and put one leg in front of the other. This then gave me some enjoyable time finding pictures of some popular Australian walks.

After walking came fitness at the gym, with 3 million people attending the local workouttery.

After that was swimming, with 1.4 million participants; then cycling, with 1.37 million; followed by jogging/running, with 1.36 million.

Below a million, golf comes next with 860,500 players, then tennis with three quarters of a million racquet swingers.

After that, the first team sport makes an appearance — soccer with 489,100 players; then netball, with 450,200 participants.

So my questioner above was approximately right, netball has the second most participants of team sports in Australia.

So that meant it was about time I made mention of this sport here.

I contacted Netball Australia and learned that the next major outing for the Australian netball team,  the Diamonds, is a test match against the Silver Ferns of New Zealand in Invercargill, New Zealand, on 2 October.

This will be the first match of the Constellation Cup, the netball analogue of rugby’s Bledisloe Cup, and so, in the run up to that match ‒ thanks to helpful media rep for netball Australia, Chris ‒ we’ll be hearing from, Lisa Alexander, the coach of the Diamonds and learning of the result of the subsequent matches.

This year, the Diamonds will be playing six tests — two against England and four against New Zealand.

For the record, the Constellation Cup was first played in 2010, and has been played each year since. Australia have won three series, and NZ one.

Coverage of netball in Australia and New Zealand is increasing, with the domestic championship appearing on SBS2, Fox and Sky in Australia. While in New Zealand, Sky have been a strong supporter, showing all live domestic games, while Prime show a highlights package and Maori Television’s Te Reo channel shows one live game a week.

The final of the 1999 Netball World Championships between New Zealand and Australia was, at the time, the highest rating program ever for then-televisor (in New Zealand) TV2.

So we’ll come back to netball closer to the first match of the Constellation Cup and return to the football field here in Australia.

In the Aussie rules (AFL) there are three teams left.

The Sydney Swans played North Melbourne on Friday night at Stadium Australia in Sydney. The Swans were in majestic form and led at every break, before finally winning 19.22-136, to North’s 9.11-65. There was a also a slight geographic irony here that I feel inclined to point out, Sydney started life as South Melbourne and were known as simply ‘South’, as North Melbourne are likewise known as ‘North’.

Thus, this match saw South v North at one of South’s home grounds in the north, with the southern team, North, played away from their home ground in the south.

The other AFL final sees Hawthorn up against Port Adelaide. Hawthorn are favoured, due to their top two finishing spot, but Port are not here by accident and have shown plenty of willing when it comes to tackling finals’ opponents. Hawthorn should win here, but will have to earn it.

Brisbane and Melbourne are gone for the year, defeated by North Queensland and Canterbury, respectively. Souths and Penrith earned a week off – Souths comfortably home over Manly, 40-24, while the Panthers broke the hearts of the Easts’ fans with a one point victory in the shadow of the siren, 19-18.

Easts provided their fans with another heart-stopping, but this time not heart-breaking, outing on Friday this week at the Sydney Football Stadium. The Roosters led 30-nil after thirty minutes and most were writing the game off as won.

Then North Queensland made a barnstorming comeback, and the scores were tied 30-30 with twenty to go.

Then Easts five-eighth, James Maloney dropped a field goal in the 76th minute, to take Easts into the lead at 31-30.

THEN, in the last minute of time, the Cowboys master playmaker, Johnathon Thurston crossed the line and touched the ball down for what looked like the match winning try. The try went upstairs for video review and was disallowed for due to a knock on, the ball having brushed the arm of a Cowboys player Robert Lui in the lead up and controversially declared to have gone forward, though it appeared to have been propelled backwards. The Cowboys are used to these sort of decisions going against them in finals football in Sydney.

So Easts had their second one-point margin in two matches, but thankfully this time they were on the right side of the 31-30 score line.

The other game this weekend, Manly-Canterbury, is something of a grudge match — Canterbury is currently coached by Des Hasler, his previous club was Manly. When he left the Sea-Eagles, there was some controversy over player and staff poaching, with Manly claiming Hasler was surreptitiously asking other Manly staffers to leave and join him across town.

Manly is now coached by Geoff Toovey and the ‘getting-inside-the-other-team’s-head’ malarkey has started.

Manly’s fullback Brett Stewart said this week that his side couldn’t win without suspended forward Anthony Watmough. It might seem like an odd thing to say, ‘we are going to lose’, but Hasler feels that it is Manly trying to lull the Bulldogs into a false sense of security and gain the mystically powerful ‘underdog’ mantle.

However, Hasler is not buying it, saying this week in a press conference (via ABC. net.au):

"We have to be on our guard, finals are so even, so unpredictable.”

So, across NSW and Victoria this weekend, four football matches, across two codes, will be played with all the tension and drama one would expect from finals football.

I will be watching, but only after I’ve got out there with you other four million people and had a nice walk. 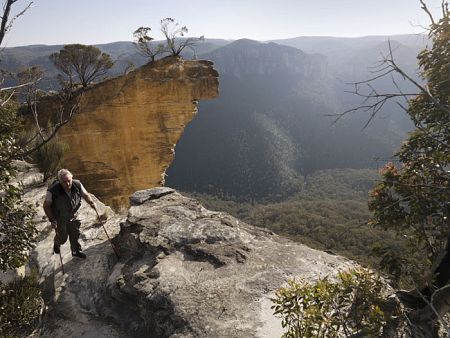