Australia finally pulls something from the wreck

After a disappointing start to the summer, Lachlan Barker reports on Australia's form reversal in the day night test.

With the summer upon us, it was time for test cricket and this year we cricket fans tuned into the series against South Africa with considerable interest.

I was going to write with "high hopes", but realised that hardly applied.

Following losing all three tests to Sri Lanka in August, we then went to South Africa and got gubbed five-nil in a one day international series, so we now faced the might of South Africa in the tests.

In Perth, the series began and at first, things were going sort of Australia’s way.

South Africa won the toss and batted, being dismissed for a shortish total of 242. Josh Hazlewood and Mitchell Starc were the best for Australia, with three and four wickets respectively.

Then, with Australia’s first turn at the crease, things again looked good to start with, with Dave Warner and Sean Marsh (63) putting on 158 for the opening stand.

However, there is where things began to clatter downhill in calamitous fashion.

Warner was dismissed for 97, three runs short of his tonne (I prefer metric in all things).

Now, if he had got to a hundred and was dismissed shortly after, the microscopic amount of runs added would not, of course, have made any material difference to the score or the match.

However, Warner’s dismissal set off – in my opinion – a psychological shockwave through the rest of the team and the jitters took over from there.

Australia collapsed to be all out for 244 — losing the last nine wickets for 86 runs.

Downhill we went from there and never recovered.

South Africa then went out in their second innings and mounted 540 runs and declared with eight wickets down.

Australia’s best chance now, really, was a draw and that was a long shot at best.

Australia performed manfully to mount 361 runs, but it was too little too late. Usman Khawaja top scored with, yes, 97 and, sadly, once again, his dismissal short of the tonne kinda showed the way things were going for Australia.

Peter Nevill added 60 not out and I ask you to remember that for the events that are about to follow.

The next test was in Hobart and, again sadly, Australia’s performance there made the above-mentioned loss by 177 runs in Perth look like a solid, stable and mature performance by a mindful and assured team.

South Africa won the toss and elected to bowl and, by crikey, was that the right decision.

Australia was all out for 85(!) in their first innings — a disaster in anyone’s language.

South Africa then batted stably and sensibly for 326, then it was our turn again.

This time we did better, 161 runs, but this still wasn’t enough to even make South Africa bat again, with the final readout South Africa winning the test by an innings and 80 runs and clinching the series 2-0.

AUSSIES ALL OUT: South Africa win 2nd Test by an innings and 80 runs. #cricket #AUSVSA pic.twitter.com/4KSgUmVjcJ

Following this, chairman of selectors Rod Marsh resigned and the remaining selectors then brought about wholesale changes for the final match in the series, a day-night test in Adelaide.

Ferguson and Mennie can consider themselves unlucky, dropped after only one test tryout. Two matches minimum is the usual rule of thumb.

However, Nevill was even more of a surprise, with his 60 not out in Perth and keeping more than adequately, dropping him for Matt Wade seemed an overly harsh choice. I might add, Nevill then went back to Hobart for a Sheffield Shield fixture and scored 179 not out, so he certainly made his point.

Thankfully, though, redemption for Australia awaited.

The Adelaide test was a resounding success, with good crowds and a family friendly atmosphere allowing the kids to play around the back, while the parents either sat out the back watching, or in the stands watching the cricket live.

The new players were Matt Renshaw, Peter Handscomb and Nic Maddinson, while former test player Jackson Bird, along with Wade, returned to the team.

South Africa batted first in Adelaide and put on a modest 259, led by captain Faf Du Plessis with 118 not out.

Australia, in the first dig, were best served by Usman Khawaja with 145, ably supported by captain Steve Smith with 59, new boy Handscomb with 54, and old boy Mitchell Starc with 53, taking the team readout to 383.

Australia did well in the South African second innings, led by four wickets from Mitchell Starc and a crucially timed three wickets for Nathan Lyon, dismissing South Africa for 250.

And so finally it came down to Sunday afternoon, with Australia needing 127 to win. 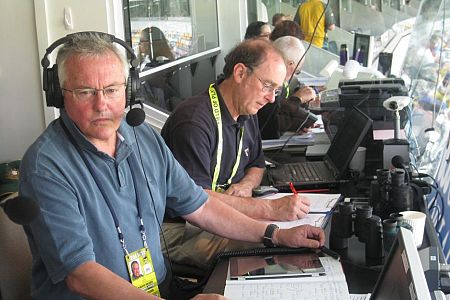 ABC scorer Ric Finlay (right) did the nerves no good at all in the final session. Now retired commentator Drew Morphett sits alongside. (Source: abc.net.au.)

The ABC’s scorer, Ric Finlay, did the nerves no good by telling us that three times Australia had collapsed in similar strong positions to lose the game. Not that any of us needed telling after the debacle in Hobart ... so thanks, Rick.

However, Warner and Renshaw settled the nation’s nerves by putting on 64 for the opening wicket, before Warner unsettled them again, being dismissed in a nerve jangling run out incident. The run was never there, so why he went we do not know, but Renshaw said "No!" and, by then, it was too late and Warner was out well short of his ground.

Then first innings hero Khawaja went for a second ball duck and the nerves continued to unravel.

Luckily, captain Steve Smith righted the ship and it would have been a just reward for him to be there at the finish having performed well throughout the series. However, he copped a jaffa of a delivery from Kyle Abbott in the shadow of victory and was out for 40 — two runs short of the victory target.

So then Peter Handscomb and Matt Renshaw got a rare opportunity to hit the winning runs on debut, which Handscomb duly did and Australia was home by seven wickets with a day to spare.

Talk about waiting to exhale.

A good performance in the end in Adelaide. Well done the new boys and the returned boys, but it kind of shows where things have got to when we consider losing a test series 2-1 some sort of an accomplishment.

The day night format was a resounding success and it appears clear this is how all tests will be played in the near future. With one session each day played after working hours, and with the TV companies able to provide test cricket in prime time, as the 20-20 games are currently played now, it gives assurance for the future of the five day game.

It's all over, congratulations Australia on their 7-wicket win. Congrats SA on their 2-1 series win. #ProteaFire #AUSvSA pic.twitter.com/ZB8gkS5n8G