Australia and New Zealand prepare to open their economies safely but the U.S. is courting disaster if it eases restrictions now. Alan Austin assesses the situation.

AUSTRALIA is currently an intriguing place to observe. And not just because of its first-ever winter without Aussie Rules and NRL football dominating the discourse.

Some Australian states are about to return to work having apparently managed the coronavirus outbreak better than have most countries. Observations of Australia’s progress have been published in Mexico, France, Spain, Indonesia, Japan, Canada and elsewhere.

At the outset of the pandemic, scientists predicted most countries would experience a steep rise in infections, followed by a plateau, then a steady decline, in a bell-shaped curve. Australia has been a textbook case. 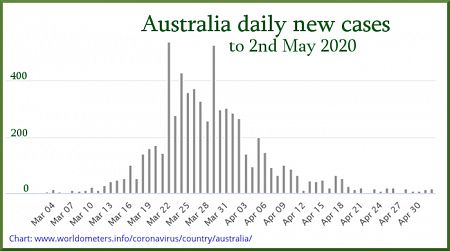 There is still a tail, but with just 84 new cases reported in the seven days to May 2, it's pretty slender.
Switzerland, Austria and New Zealand are among the small number of other countries with near-perfect bells. 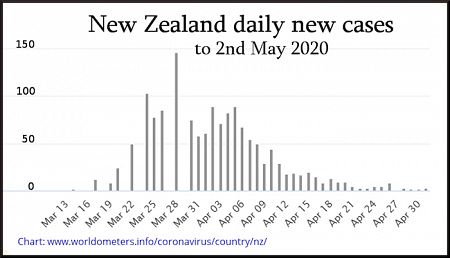 New Zealand recorded just 24 new cases in the week to May 2, which is slightly higher than Australia’s relative to population, but still satisfactory.

South Korea appeared to be leading the world when it hit peak infections on 3 March – much earlier than Australia’s on March 22 or New Zealand’s on March 28 – and then declined steeply. But the tail of its bell has proven frustratingly long. South Korea recorded 62 new cases in the week to May 2, more than eight weeks after the top of its bell.

Germany has been touted as one country which appeared to have won against the virus but then opened its economy too soon. Its chart shows a pattern of several steep declines in infections after its 27 March peak, each followed by a surge of new cases. 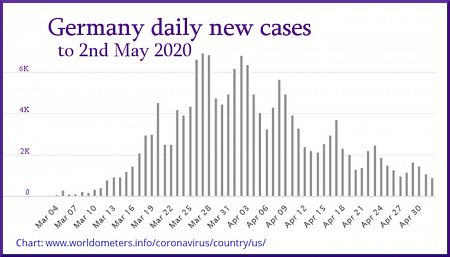 Germany would seem to have a way to go yet before declaring victory, with 8,454 new cases recorded in the last week. Even with more than three times Australia’s population, that’s a huge discrepancy in infections added.

Germany is a magnificent success story, however, when compared with the United States, which has stacked on a staggering 200,123 new cases in the last seven days — with no end in sight. 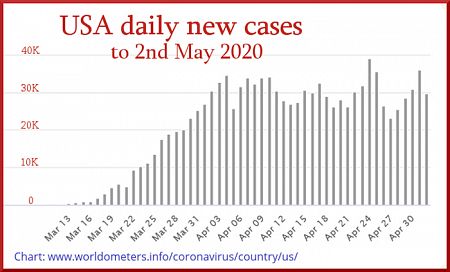 Plans by the U.S. President and some state governors to open the economy would seem doomed to catastrophic disaster if they proceed now. Any number of statistical comparisons confirm the United States has handled the pandemic extraordinarily badly and is nowhere near controlling it.

Here’s one. There are 51 very highly developed major countries as classified by the United Nations Development Program. These include all G7 nations, all NATO members except Albania and most OECD members. We find at Worldometers the number of active infections for all these nations, updated daily.

The United States is not only at the top of this list of 51 countries but, wait for it ... it has more active cases than the other 50 nations combined. That’s despite having only about a quarter of the total population.

Here’s another. Since the pandemic started the USA has recorded 27.6% of all deaths, at 67,444 as this is written. That percentage is rising by 1% every two days. That’s despite having just 4.25% of the world’s population.

There is no excuse or reasonable explanation for this. In early February, Italy realised it had a major outbreak of infections in the Lombardy region. But by then thousands, maybe tens of thousands, of infected visitors had driven or hitch-hiked or taken a bus or train to neighbouring countries. Six countries are only a few hours drive away. Western Europe’s fate was sealed.

The rest of the developed world watched Europe’s calamity aghast and rapidly implemented preventative measures. These included restrictions on air travel from Europe, quarantining new arrivals, testing for infections, contact tracing and telling citizens what was happening. Well, most did. The USA did not. Not until far too late. And some of these things – such as telling Americans the truth about the infection and widespread testing – it still hasn’t done.

Countries ready to return to normal

If Australia and New Zealand are close to opening their schools, shops and restaurants, which other countries might be able to join them? How can we tell?

Every day Worldometers updates active infections, recoveries, deaths, total infections and tests completed for the entire world. It also provides ratios of some of these to the population. So we have a heap of helpful numbers.

Australia, for example, has 5,789 recovered patients and just 901 active cases, so its percentage is an impressive 643.

Of our 51 major highly developed countries (above one million inhabitants) 17 now boast more recovered patients than current cases – that is, a percentage above 100 – and another 12 have the ratio of recoveries to active cases above 50%.

The leading nations are Austria, South Korea, Australia, Switzerland, New Zealand and Hong Kong, all with more than five times the number of recoveries than people still suffering. They are followed by Germany, Denmark, Croatia, Malaysia, Uruguay and Ireland — all with twice as many recoveries. This is good. These countries may now be in a position to ease the restrictions which have enabled this progress. 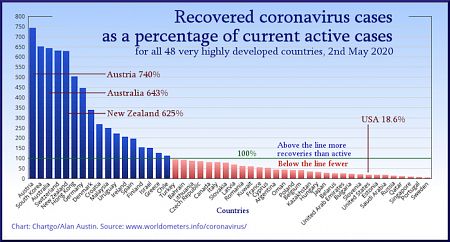 At the other end of the chart are those who shouldn’t be opening up any time soon. These include the United States, Saudi Arabia, Russia, Portugal and Sweden. Countries in between are shown on the blue chart, above (which shows just 48 countries as three do not provide recovery data).

So we shall watch with great interest – and a certain amount of trepidation – as Australia and others progressively end the self-isolation and return to some semblance of normalcy. We might even get a few rounds of footy in after all.

.@benstracy asks Pres. Trump how he expects coronavirus to be "gone" without a vaccine

The new coronavirus threat to the world is the USA https://t.co/BmOQsDrodP @IndependentAus