Anaphylaxis: When food can kill you

Anaphylaxis is on the rise in Australia, but who is held accountable if you become ill or die due to an allergic reaction caused by negligence? Deputy editor Michelle Pini reports.

IF YOU BECOME ILL OR DIE of salmonella or listeria poisoning after eating out, it is clear the establishment that served the offending food will be held accountable.

Under Australia’s liquor licencing laws (which can vary slightly in each state) if you drink too much, of your own volition, in a bar or other licensed venue and then decide to walk into oncoming traffic, the establishment that served you the alcohol will be held at least partially legally liable for your serious injury or death.

If, however, while attending a function or dining out in a paid establishment you are served a potentially lethal ingredient to which you are severely allergic and you become ill or die – even when you have been given assurances the food you are being served is free of that ingredient – it’s likely proprietors and government authorities will um and ah, shrug their collective shoulders and possibly mumble half-hearted sympathy, but no one will be held accountable.

Claudia (not her real name) was a staff member at a conference held in Adelaide by her employer, where the catering was managed by the venue. As is customary with such events, she had provided prior notice (in writing) of her severe anaphylaxis to nuts.

Before eating each meal – based on previous experience of careless standards at other large events – Claudia checked with the food service staff to ensure the food served did not contain nuts. On the first day, she was assured that this was not the case and was even told that all food brought to the staff room at the convention would be nut free, in accordance with the client's specified dietary requirements.

'Management maintained they were not at fault ... despite making assurances that they were able to [meet] ... dietary requirements.'

After checking with the wait staff, Claudia ate a bite-sized chicken appetiser. Immediately, the morsel burned in her mouth. Within seconds, her lips began to swell and her throat hurt. As her breathing became laboured, Claudia realised she was in the throes of a severe allergic reaction, which would likely lead to anaphylactic shock and possibly death. She signalled to a work colleague to administer an epinephrine (adrenaline) injection, known as an EpiPen — which she carries with her. Her colleague (luckily versed in how to do this) complied. Someone called an ambulance. She was held in observation at the hospital for most of that day, mainly to monitor recurrence and to ensure her heart rate and breathing returned to normal before being released.

Anaphylaxis is a life-threatening medical emergency. It is an extreme allergic reaction, which can cause collapse, loss of consciousness, cardiac arrest and death. Typically, it occurs without warning and escalates rapidly. 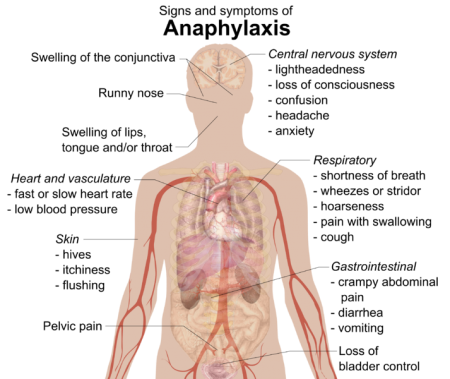 During an allergic reaction, a complex series of events occurs within the body. These events are coordinated by the immune system. Sometimes the immune system "goes into overdrive". If this happens, the body can lose control of its vital functions, with catastrophic results. Such a severe reaction can cause death. This is anaphylaxis.

That evening, after being released from the hospital, Claudia suffered from a debilitating headache and physical fatigue. The following day she went to back to the convention, feeling confident the worst was over. A few hours later, her vision blurred and she temporarily lost all sight. Her vision slowly returned in one eye but not the other and her colleagues, fearing she may be suffering a stroke, again called an ambulance. Back in the hospital, tests were performed and she was again held under observation for several hours until her vision returned.

As EpiPen manufacturers warn, Epinephrine side effects include:

Side effects can also include vision problems, high blood pressure, buzzing in the ears, chest pain and seizures.

And that’s the treatment.

Australia has one of the highest incidences of food allergy in the world.
Learn more about anaphylaxis here: https://t.co/YAudmPytbL pic.twitter.com/qs7hOPex9l

Of course, dealing with any side effects of the medication is preferable to the alternative, which is probable death. Cortisone, Asthma inhalers (beta agonists) and antihistamines can also slow down the effects of an anaphylactic attack if an EpiPen is unavailable, but immediate treatment is vital.

Anaphylaxis often grows in severity with each reaction and sufferers may also experience post-traumatic stress disorder.

Far from showing contrition or even taking Claudia’s medical emergency seriously, the conference centre's management maintained they were not at fault. This is despite making assurances that they were able to provide food meeting Claudia’s dietary requirements.

On the third day of the conference, wait staff asked attendees whether anyone had dietary requirements as they served food, seemingly following food service protocol.

I advised them [the wait staff] I wouldn’t be eating because of what had happened. I was shocked to discover they were unaware of my hospitalisation due to eating their food.

The manager said they were adamant the food did not have nuts in it and refused to accept any responsibility. And they did not behave as if someone had nearly died but rather as if an unfortunate mishap had occurred for which they were not directly accountable, like an accidental injury.

Anaphylaxis cases in Canberra, Australia have increased by 60% this past year https://t.co/VkuLUgwK7d

Claudia tried to report the matter to the health authorities.

“I wanted to be sure this wouldn’t happen to anyone else or that no one dies in future. They [the conference centre] didn’t take it seriously. They tried to blame it on me."

"I got the run around from everyone. The last person I spoke to, at SA Health, said he would call me back after making enquiries with the venue. A month has passed and he has not."

Regarding reporting procedures and regulation, SA Health informed IA in a statement that:

SA Health is responsible for the administration of the Food Act 2001, which includes ensuring food for sale is safe and suitable for human consumption and preventing misleading information related to the sale of food. We respond to any notification of food being falsely described in the event that a consumer has suffered physical harm. ...

We encourage anyone who has been impacted by false or misleading food information to lodge an official complaint with SA Health. ... SA Health will investigate and when required, take action, which can include food safety advice, education, and resources to food businesses as well as enforcement.

However, this was not Claudia’s experience. She has sought counselling to deal with the stress and anxiety of this event.

Australia is the allergy capital of the developed world and recent studies have demonstrated a doubling in the incidence of anaphylaxis, mainly due to food allergies. Clearly, greater awareness is required, particularly in relation to the issue of duty of care.

IA asked the Federal Minister for Health, Greg Hunt, to clarify the rights of members of the public with respect to food handling in a scenario such as Claudia's and what could be done to improve awareness. He declined to comment. 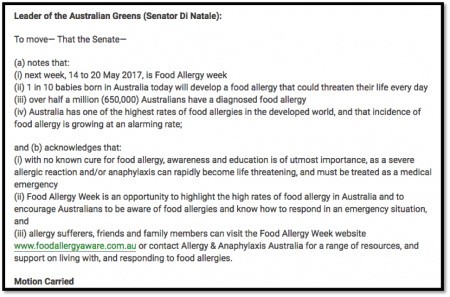 Interestingly, when IA approached Senator Di Natale about how awareness and food safety can be improved in practice, he also declined to comment.

In Australia, food safety is governed by individual States and Territories but while there are slight differences, the essence of the legislation is the same.

In particular, [the Act] provides that

‘[a] person must not cause food intended for sale to be falsely described if the person ought reasonably to know that a consumer of the food who relies on the description is likely to suffer physical harm.'

Theoretically, if a person died or suffered very serious injury as a result of an allergic reaction after being told that a food did not contain an allergen, more serious criminal offences might also be relevant, such as manslaughter by gross negligence or negligently causing serious injury under the Crimes Act 1958.

'According to the Act, a food business must not provide false information that could cause physical harm on the consumer.'

So, the regulations and governing authorities do hold establishments accountable? Well, not exactly.

I am not sure whether a prosecution has ever been brought under the Food Act for falsely claiming that a food is free of an allergen. ...

One obstacle to a negligence claim in this scenario would be the "threshold" requirements in the Wrongs Act 1958 (Vic) ... which provides that ... a person cannot recover damages for pain and suffering in respect of an injury unless he or she has sustained permanent physical impairment ...

If a person is quickly revived with an EpiPen and suffers no lasting damage, he or she may not have a viable cause of action in negligence. ... However, if there is lasting physical damage, such as brain damage due to hypoxia, or psychiatric illness, such as post-traumatic stress disorder, a person may meet the threshold requirements and be entitled to claim damages.

So there you have it — unless you die or sustain brain damage, it is unlikely anyone would be held accountable for anaphylaxis caused by negligence.

Anaphylaxis in Australia: A few facts