SUBSCRIBE   DONATE LOGIN SHOP
SUBSCRIBE   DONATE
How we prevented a Morrison dictatorship
How Howard screwed the Libs
U.S. site tries to ruin what makes fairy bread great
Bloody Idiot of the Week — Episode 28: Get used to it
Morrison's 'politics of retribution'
Life & Arts

Are all deaths equal? Martin McMahon concludes his report on deaths from terrorism, mass killings, indiscriminate killings, deaths by gun-toting loonies in the U.S., malaria and hospital deaths. His verdict: "No, they are not".

What facts are worth pointing out?

The two biggest massacres in Australia, Hoddle Street and Port Arthur had nothing to do with religion.

If Andrew Bolt, Sonia Kruger et al. don’t need to worry about Jihadists in Australia, what should they be worried about?

Probably not in the type of work they do.

However, some 2.2 million people die of work-related accidents and diseases each year, the International Labour Office (ILO) said in a new report to be issued Monday at the 17th World Congress on Safety and Health at Work, adding this number may be vastly under estimated due to poor reporting and coverage systems in many countries.

The European Union, meanwhile, recently in its own Statistical Portrait Report estimated a total of 120,000 fatalities (EU 15) attributed to work while the ILO's estimate is now at 122,000 work-related deaths annually. The United States number is estimated to be 103,000.

That’s the equivalent of the population of Australia’s third largest city Brisbane (2,189,878) every year.

Going to the U.S. perhaps?

Andrew Bolt and Sonya Kruger statistically have a bigger chance of going to the U.S. buying a gun and committing suicide than being killed by a terrorist in Australia.

In America 100,000 people are shot every year. Some are murdered, others commit suicide, and others are the victim of tragic accidents.

Then there is going on holidays to exotic places. Is that safe for Bolt and Kruger?

Malaria killed around 440,000 people in 2015. Malaria is credited with killing off entire species of birds — notably in Hawaii where, when it was introduced in the early 19th century, no native species had built up immunity. Some even blame the fall of certain civilisations on the disease’s spread.

If you happen to be one of around 100,000 people who die of snake bites around the world in any given year, such facts are irrelevant to Bolt and Kruger.

Sepsis causes millions of deaths globally each year and is the most common cause of death in people who have been hospitalized. The worldwide incidence of sepsis is estimated to be 18 million cases per year. Death rate is as high as 50 per cent. And you don’t have to go on holiday for that.

And legal prescription drugs and alcohol to worry about

The National Safety Council in the U.S. reported that nearly 19,000 people die each year from prescription opiod overdoses. 5,500 die due to alcohol in Australia every year without a mention.

There are deaths from preventable errors in hospital. We mostly never head of them at all unless maybe it’s babies.

However, in 1999, Americans learned that 98,000 people were dying every year from preventable errors in hospitals. That came from a widely touted analysis by the Health and Medicine Division (formerly Institute of Medicine) called 'To Err Is Human'. This was the “Silent Spring” of the health care world, grabbing headlines for revealing a serious and deadly problem that required policy and action.

As it turns out, according to some, those were the good old days.

According to a new study just out from the prestigious Journal of Patient Safety, four times as many people die from preventable medical errors than we thought, as many as 440,000 a year.

With innovations in research techniques led by Dr. David Classen, the Institute for Healthcare Improvement and others, there are more tools to tell us where the bodies are buried.

Medical errors now claim the spot as the third leading cause of death in the United States. No terrorists there either.

medical errors 3rd biggest cause of death in America. Anyone have stats for Australia? https://t.co/onpi1kgZKm

They are burying a population the size of Miami every year from medical errors that can be prevented.

In Australia, they keep their (Health Care) cards close to their chests. (They probably do in the U.S. too but someone takes the time to wrench them away from them. In Australia it’s mostly ‘he said, she said’ journalism.) The figures are buried with the errors in Australia but by some estimates, as many as 18,000 people die every year as a result of medical error, while 50,000 people suffer a permanent injury.

But there is no systematic collection and linking treatment error data, so it is impossible to know for sure how many medical mistakes cause serious harm or death. This is a lot greater than the 1,200 or so road fatalities but we never hear of it.

Deaths from asbestos and Mesothelioma

Probably not an area for Bolt and Kruger to worry about either but Australia's high incidence of mesothelioma corresponds with the country's extensive history of asbestos use. Experts report that from the 1950s to the 1970s, the country had the highest per capita rate of asbestos use in the world. People were already dying in those years and the mining and manufacturing companies and the government were waiting for them to die out so as not to pay compensation.

Asbestosis is a chronic lung disease characterized by a scarring of lung tissues, which leads to long-term breathing complications. The disease does not have a cure.

More than 13,000 U.S. asbestosis deaths were recorded from 1995-2004. However, many people who get asbestosis die from a related disease, sometimes lung cancer or mesothelioma.

The Australian Mesothelioma Registry concludes that 551 Australians died from mesothelioma in 2007, the most recent public accounting of the disease.

A study of 600 mesothelioma patients in the UK and Australia revealed that 1 in 10 retired carpenters born prior to 1950 would die of asbestos-related cancer.

The number of mesothelioma cases in the country is expected to reach 18,000, according to the Australian Institute of Health and Welfare.

Black lung was not eradicated, it was 'covered up'

Now it has been discovered that ‘As many as 1,000 Queensland coal workers could have black lung’, as reported on ABC news.

In 1984, a government survey identified 75 confirmed or suspected cases of ‘black lung’ amongst the state’s underground coal miners.

When Tony Abbott was the minister for health, the dying asbestos disease sufferer, Bernie Banton, obtained a petition containing 17,000 signatures of those who supported the listing of the mesothelioma drug Alimta on the Pharmaceutical Benefits Scheme. This petition was to be presented in person to Tony Abbott. If it wasn’t disrespectful enough to snub the petition, refusing to meet him even though it was an arranged meeting, then his verbal response certainly was.

It was a stunt.

I know Bernie is very sick, but just because a person is sick doesn’t necessarily mean that he is pure of heart in all things.

He had no compassion as health minister. But they are all without compassion. It’s in their DNA. Take Julie Bishop as another example.

In the 1980s, working under her married name Julie Gillon, Bishop was deeply involved in some of Slater & Gordon's biggest asbestos cases.

‘We had to fight even for the right of dying cancer victims to get a speedy trial. I recall sitting in the WA Supreme Court in an interlocutory hearing for the test cases involving Wittenoom miners Mr Peter Heys and Mr Tim Barrow. CSR was represented by Ms Julie Bishop (then Julie Gillon). (She) was rhetorically asking the court why workers should be entitled to jump court queues just because they were dying.’

Julie Bishop represented the mine owners, and defended her role

“As one of the lawyers in the case, I acted ethically and professionally at all times in accordance with client instructions.”

And, yes, despite claims to the contrary, lawyers can choose their clients.

Julie Bishop is no expert on moral fibre but she sure knows her stuff on immoral fibre #asbestos #auspol #ausunions https://t.co/Hz041JHI96

After the media flurry and to soothe things over, our Deputy Prime Minister Barnaby Joyce made one of his usual irrational statements that went over the heads of every journalist.

Every group has their ratbags, even Catholics.

We had, in the past, the IRA, but if some said every Catholic is a member of the IRA, I would say ‘no, we’re not’. They’re lunatics, crazy criminals who want to kill people who have nothing to do with the religion I practise.

He compared the IRA to religious fanatics. An example of the simplified views people have of the world. If he knew anything about history he would know that it is a territorial claim and had nothing to do with religion. There is even a clue in the name Irish Republican Army — not Irish Rage against the Protestants Army.

Joyce and those who should know better is an example of the reality that so many know so little about so much.

Then there are huge numbers of missing persons

It is estimated that 35,000 people are reported missing each year in Australia with 6,000 people go missing in Queensland alone. Most are found but many are never heard of again. 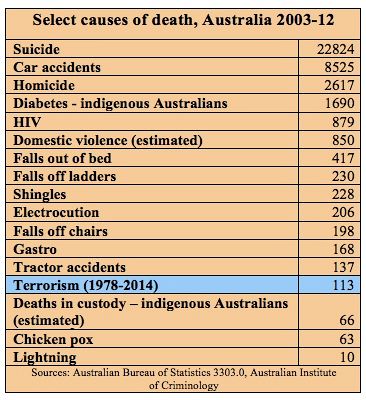