63 not out forever: Vale Phillip Hughes

TERRIBLE TIMES for us here in the sport section this week with the tragic death of cricketer Phillip Hughes.

Hughes was a top flight cricketer with Test and one-day appearances for Australia.

This is hard to write, believe me.

Hughes was playing at the SCG for South Australia in a Sheffield Shield Match against his native state, NSW.

Unfortunately he was slightly late on the shot and, though wearing a helmet, the ball hit him on the side of the head at the base of the skull, causing massive head trauma. He was taken from the field in an ambulance and was in an induced coma from the incident until his death on Thursday.

It was a freak accident and a truly shocking occurrence, leaving those of us who follow cricket stunned.

Sympathy and condolences have poured in from across the country and around the world, including current and former cricket greats and political leaders.

Much could be written on this topic but I will keep my main recollection to Hughes’ second ever Test match. Australia was playing South Africa in South Africa, Hughes, following a run of form at state level, was picked to play at the age of 20. In this Test, he went out and scored a century, 115. Then in the second innings of the same match he blasted 160, becoming the youngest Test cricketer to score a century in both innings of a Test.

Added to that was the fact that at the time the South African fast bowling attack in that Test match was considered the best in the world, containing as it did Dale Steyn and Makhaya Ntini. Steyn and Ntini were the second and fifth best Test bowlers, respectively, in the world at the time. Great Australian ABC cricket commentator, Glenn Mitchell, said of that innings that Hughes “made them look ordinary”.

The memorials for Hughes have been nationwide. Junior cricket has changed the retiring score from 50 to 63 — the score Hughes was one when he was hit by the ball and collapsed. The retirement of a batter halfway to a century, by the way, was brought in to allow for whole team enjoyment of the game.

.@MClarke23 says #PhillipHughes made him a better man; "I’ll miss you forever my friend" http://t.co/mJjvozTqJL pic.twitter.com/8EpajEfxlP

When I was a boy cricketer, I wasn’t that good and my recollection was that junior cricket back then mainly involved two or three good players who did everything. They opened the batting, they opened the bowling, while the rest of stood in the field all day, bored senseless. So the retirement at fifty is a good rule for cricket as a whole, the more each team member enjoys their cricket, the more youngsters will go on to play as an adult.

Now with the retirement score changed to 63, it will provide ongoing memories of Phil Hughes.

Another memoriam for Hughes was the #putoutyourbats social media campaign (if ‘campaign’ is the right word) instigated by Cricket Australia. This involves anyone who has a cricket bat, putting it out on the front porch, or somewhere else visible, often with a cap the owner of the bat wears while playing their cricket. It was another great gesture.

I contacted a friend who’s son plays cricket on Sydney’s northern beaches and asked if they had taken part in #putoutyourbats, he replied in the affirmative and said it was a

‘…very moving few moments as we paid our respects. We observed 63 seconds of silence.’ 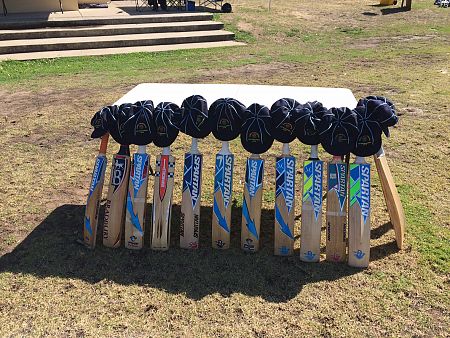 Manly District Cricket U/16 team put out their bats and caps before their match against the Central Coast at Mike Pawley Oval, Curl Curl, on Sydney’s northern beaches (Source: Sharon Bain)

This observation of silence occurred across the country at all cricket matches on the weekend, both senior and junior, male and female, and was in itself an expression of the profound shock the cricket, and the wider sporting world, felt at the loss of Phil Hughes.

A final note of the shock felt has been the postponement of the first Test against India, due to start on Thursday this week, 4 December, in Brisbane. Hughes was a possibility to play in this match and the Indian team have agreed to postpone the game.

So one can only say at the end:

Thanks Hughsie for all your cricketing endeavours that provided us with so much pleasure.

Phillip Hughes' funeral will be held on Wednesday in Macksville, NSW and will be broadcast live on Channel Nine. Lachlan Barker blogs at cyclonecharlie88.blogspot.com.au. You can follow him on Twitter @cyclonecharlie8.