Screen themes: The worst film of all time

It is the Citizen Kane of bad movies, so terrible it has a cult following. Entertainment editor John Turnbull reviews The Room. 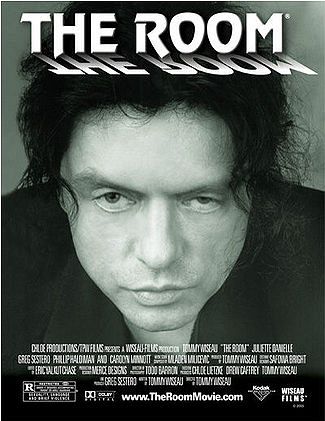 UNTIL A MONTH AGO, I had never heard of Tommy Wiseau, writer, director, producer, executive producer and star of The Room, popularly known as the worst film of all time.

The story goes that Tommy really wanted to make a movie, but he couldn’t get anyone to finance it. This was probably due to the script, but possibly because Tommy also wanted to star in the movie.

Undeterred by rejection, he financed the film himself, generating a reported $5 million from his leather jacket import business. If this story sounds somewhat unlikely, be comforted that you’re not the first person to have that thought — I defer to the great Patton Oswalt.

The plot, such as it is, involves a love triangle between Tommy, his best friend Mark (the fact that they’re best friends is mentioned frequently) and Lisa.  Tommy also has a youthful ward called Denny, a creepy man-child who ages (but doesn’t actually grow) between two and five years over the course of the film.

Unfortunately, Tommy is not a good actor, has a poor command of dialogue that he presumably wrote and can’t resist laughing manically at inopportune moments.

Tommy is also a poor director, cutting to establishing shots of San Francisco so often that it becomes a running (if unintentional) joke. There are three separate sex scenes in the movie which re-use footage extensively and drag on way too long.

Supporting actors vary in talent from occasionally competent (Mark) to laughably terrible (Lisa) and the camera slips in and out of focus every few minutes.

Movies like The Room are best seen with friends who can appreciate it for what it is. If you watch it by yourself on your laptop I doubt you’ll make it past the half hour mark, but with a like-minded audience it’s absolutely hilarious. My fellow travellers were Simon (movie Jedi, original trilogy style) and Josh (open to new ideas). Their opinions, before and after…

In these days of the Multiplex, movies on demand and rampant piracy, independent cinemas have to be inventive to keep their doors open. The Cremorne Orpheum does this by regularly scheduling cult classics like The Rocky Horror Picture Show and Grease, encouraging audiences to dress up, sing along where appropriate and generally interact with the film. 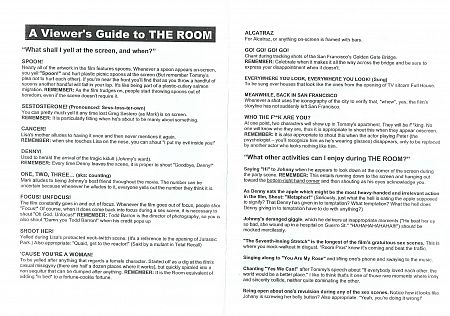 The Room takes full advantage of this freedom, with hundreds of plastic spoons being hurled at the screen whenever a picture of a spoon appears on screen. The Orpheum actually hand out spoons before the film, along with a handy guide to know what the hell is going on when people start shouting at the screen.

My personal favourite is when random and never seen again characters walk onto the screen, the audience screams "who the fuck are you!?"

I find it hard to believe that I’m typing this, but if you get the opportunity to see The Room in the right circumstances I highly recommend it.  It’s showing again at The Orpheum in December.  Bring your own spoons.