Donald Trump stars at the Carnival of Viareggio

Donald Trump will be the big star of the most important Carnival in Europe, the Carnival of Viareggio, starting tomorrow. Franceso Bertolucci reports.

BETWEEN CLOWNS and Klansmen, the new U.S. president will be shown in allegorical floats in Europe's largest carnival.

TV and media organisations and an audience of about a million people are expected from all over the world to see Donald Trump at the Carnival of Viareggio, Europe's largest parade of carnival floats. The carnival starts tomorrow (Sunday 5 February) on the promenade of the small Tuscany town in Italy. Scheduled for 5, 12, 18, 26 and 28 February, papier-maché floats will display caricatures of the new U.S. president Donald Trump.

Five different caricatures will see him as a clown or an anti-immigrant hooded tyrant.

This is a record number for a single man in this event, which has more than 30 works in competition on different issues. Every year, from the 1960s to today, the parade likes to mock the world's greatest politicians.

The main feature of the "Trump Parade" will be the float named Bang Bang by brothers Umberto and Stefano Cinquini.

It is a colossal work, standing more than 49 feet tall, with Donald Trump's caricature in the middle. On his tuft of hair there will be a Statue of Liberty with a gun in her hand to symbolise America as a weapons' slave. 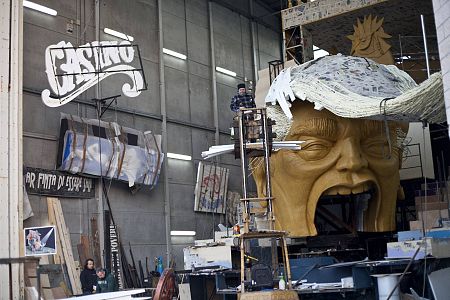 Photo of the workshop courtesy of photographer, Stefano Morelli.

An Old West style saloon is the background with armed cowboys, Indians, prostitutes and the ever-present cheerleaders.

Umberto, who has American origins as does his brother, says about the work:

"We decided to create a work on Trump before he won the primaries and we did it because he has a mask of papier-maché already on himself! A big human caricature. We did not think he would have finally won and we wanted to satirise the gun issue in the U.S. and the fact that guns kill hundreds of people every year. It will be a great show, a mini Super Bowl."

Viareggio's Cittadella del Carnevale, is a mini Hollywood for papier-mâché floats, where artists build their works and where there is a also a Carnival of Viareggio museum. As a work in progress, we can also find Terror without frontiers, a work by Silvano Bianchi.

It is a huge “single mask” as it is called in Viareggio's carnival slang, 21 feet tall, with Donald Trump riding a Trojan Horse breaking through borders where immigrants made with wire are hung. 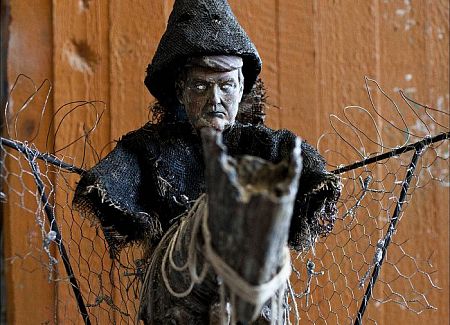 “In an interview, Trump declared that immigrants are as Trojan horses for the United States. My allegory comes from this. I chose to represent it with a Klu Klux Klan style hood because I consider this as the best example. Trump embodies terror. The racist terror worthy of the Ku Klux Klan."

The mask by Rodolfo Mazzone is softer. With his "sTrump..alato" — "bizarre" in Italian language, the Republican is seen as the American eagle, with a mini Hillary Clinton on the top who tries to kill him. Daniele Chicca, who first created a Trump caricature at Carnival of Viareggio last year in his work "American Dream" about the last presidential elections, places the tycoon in the actual work "God Save the Queen" on Brexit, where Trump is taking the queen outside Europe. 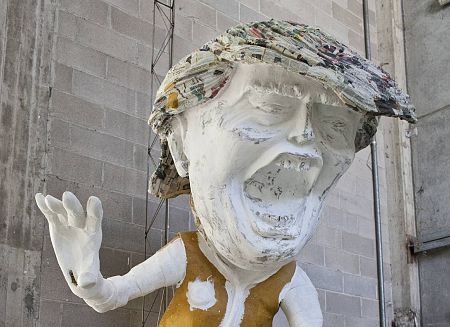 A clownish and "hungry" Donald Trump is the work by Michele Cinquini and Silvia Cirri. The two artists, mother and son, are making a Trump in perfect Ronald McDonald style, who eats Hillary Clinton in a burger.

"Let's say I am lucky because Trump has won”, Michele jokes.

... considering that the projects and drawings of the future works are presented to a judging commission in the year before the contest in June and showing the American tycoon as Ronald McDonald is a perfect allegory for me.

I was lucky ... Let's see if U.S. citizens will be lucky too in the future.

Check out the official website for the Carnevale de Viareggio here.