Waubra fights back against phony Foundation

The Victorian town of Waubra is trying to reclaim its name from a phony front for powerful vested interests ― the Waubra Foundation. Environment editor Sandi Keane sheds light on this astroturf organisation's links, as well as its decidedly underhanded tactics.

IT'S SPRING in the quiet sheep farming hamlet of Waubra, an hour’s drive northwest of Ballarat in Victoria. With the shearing done and the crops in, local farmers have turned to a bit of Springtime mending. Not fences, but the town’s image. After three years saddled with the negative legacy of the “Foundation” that stole their name, local farmer Karen Molloy says the community is fighting back with a bumper festival.

Back in 2009, Waubra hit the news when powerful forces linked to mining interests, and Australia’s climate skeptic* factory, the Institute of Public Affairs, used what was then the largest wind farm in the Southern Hemisphere as an easy target for their anti-wind scare campaign. The establishment of the Waubra Foundation followed.

“For three years, we’ve lived here quite happily. We love the wind towers and love Waubra. But it is so much more than wind, so we’ve dropped the word “Wind” from the Waubra Community Festival,” Molloy said.

The Festival on Saturday 6 October will showcase the positives of renewable energy as well as the fresh produce grown in its red volcanic soil. There’ll be a “Waubra Gift” running race, free rides, entertainment for the whole family, a free bus from Ballarat and a tour of the wind farm.

“So, come on guys, give us a fair go, give us some positive news,” Karen Molloy pleaded.

Festival President and fifth generation farmer, Doug Hobson agreed. “Communities are forgiving, but we need to put to bed this urban myth about issues with wind turbines and start fighting back.”

In November 2009, just one month after the Waubra Wind Farm was fully operational, wealthy mining investment consultant, Peter Mitchell, acting as Public Officer for the “Western Plains Landscape Guardians” took out a full-page advertisement in the Pyrenees Advocate. Guaranteed to provoke a backlash to the wind farm and frighten the public, it warned of “Waubra disease”, which apparently included headaches, sleeping problems and an increased heart rate. Genuine complaints notwithstanding, scaring susceptible individuals is a doddle if you can come up with such commonplace symptoms.

Five months later, Mitchell angered locals when he stole the name of their town to create the Waubra Foundation. In spite of its claim to be independent from anti-wind advocates (cf. Clause 12 of its Objectives), the foundation is predominantly run by the Pecksniffian-sounding “Landscape Guardians” (see my investigation July 2011 and case study March 2012). Non-Guardian director, Dr Michael Wooldridge, a former Howard Government minister is, meanwhile, facing a ban from corporate boards.

In July 2010, Sarah Laurie joined as its Medical Director, first listing her qualifications as an MD (Research) Degree but later changing it to a BM BS after the University of Sydney’s Professor of Public Health, Simon Chapman, revealed her true qualifications. 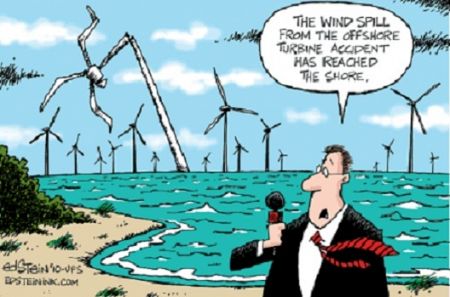 The Guardians, started by Mitchell, are a powerful, well-resourced and rapidly expanding anti-wind astroturf group.

The pressure group appears to be modelled on the U.K. climate-skeptic-run and nuclear-funded Country Guardians, set up by Sir Bernard Ingham, consultant to the nuclear industry and an acknowledged ‘black belt’ in the art of spin.

The foundation has no Waubra residents on its board, or any connection to the town of Waubra other than having hijacked its name then stigmatized it further with its cause célèbre, the medically debunked “Waubra disease”.

Karen Molloy tried to get the Waubra Foundation name changed through the Australian Securities and Investments Commission, without success.

“My children go to Waubra Primary School, my husband, Steven and I are in the Waubra Football Club. This is our town, use another name!” she said.

But when you Google “Waubra”, thanks to Google’s algorithms and an effective SEO strategy by the foundation’s webmaster, the name-stealing Waubra Foundation ensures it gets precedence over genuine Waubra-affiliated organisations, such as the Waubra footy club.

According to Doug Hobson, the newly-dubbed “Waubra disease” (as reported by the ABC News on 1 March 2010) was based on a sample of less than half a dozen people out of some 500-600 residents in the Waubra district. One is known to have had his symptoms prior to the arrival of the wind farm. 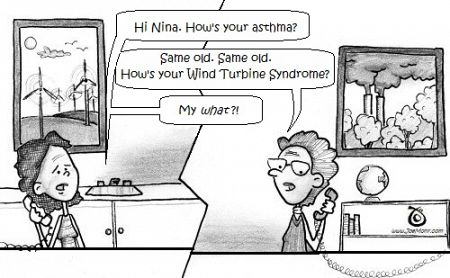 
'...appears not once in the US national Library of Medicine's online PubMed library of over 21 million biomedical papers.'

Karen Molloy and Doug Hobson are among thirty-seven families hosting wind turbines. All live within 1 kilometre of the turbines, but not one of them has experienced WTS.

In spite of the 2011 Senate Inquiry finding no link between wind turbines and illness, the scaremongers –together with a complicit Victorian government that prefers brown coal to renewables – have sent an estimated $3 billion in wind investment into free-fall.

On the face of it, the Guardians’ modus operandi has been devastatingly effective. Whenever a regional centre is earmarked for wind farm expansion, media releases go out from the “local” Guardian groups. Provocative advertisements guarantee some local attendance at the town hall meetings although, revealingly, most are non-local.

At the Yass meeting in July 2011, locals reported being outnumbered three to one by the rent-a-crowd climate skeptics and anti-wind supporters. Dr. Laurie delivered her usual scary evidence with her GP badge of authority. This she does with impunity, as only registered GPs need comply with the AMA Code of Ethics. No one from the wind industry or proponents of wind farms was invited.


“It was our community meeting. It should have been a meeting of the Waubra community, but we had these anti-wind people coming from as far afield as Gippsland. What gave them the right to barge into my community?”

Hello Landscape Guardians and supporters,   I have received various emails in the last few days regarding the planned protest at Leonards Hill this Friday at 10.30am, prompting me to speak with Kathy Russell and Jan Perry today about the event.

Jan and others have been working hard to prepare for Friday and we have been asked to assist where we can.  Following recent discussions with Peter Mitchell and Randall Bell we are keen to expose the flawed basis for wind power policy in Victoria ahead of the state election and Friday’s event is likely to help in that regard.

We have posted a number of articles critical of wind power on our website over the last few months including Kathy’s recent excellent article.

Jan has been preparing the very large sign she intends to peg out on Andrew Coker’s property on Bullarto Road prior to Friday.  The plan is to assemble at the front of Andrew’s property at about 9.30am and move to near the gateway the Premier will use shortly afterwards.

I will bring with me 50 pre-printed corflute signs [see attached files] for those that do not have signs to bring.  The more signs the better.  I will also bring a four metre long banner the Premier will not be happy with, but any media present should enjoy.

Jan and I will be doing our best to get any media coverage we can to optimise everybody’s efforts.

As others have already said in previous emails we need to make the most of this opportunity to send a message to the government as they are obviously not listening and are not concerned about rural communities.  We also need to support each and every community that is threatened by these projects.  We either all swim together or we will drown separately.

We look forward to your commitment of a couple of hours on Friday. 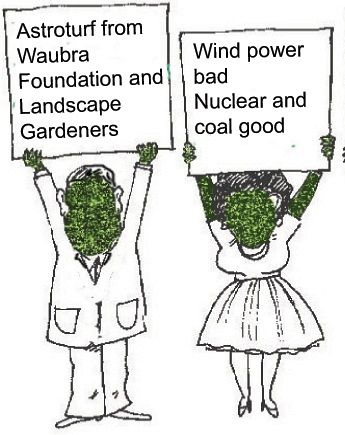 Reminiscent of the Koch Brothers funded astroturfers in the USA, wherever the Guardians go, the scene turns ugly. At Waubra, the venue was moved after a bomb scare. Property was also damaged. In Colac in 2009, former energy minister, Peter Batchelor, had his leg slammed in a car door.

More recently, another resident near Waubra who toyed with the idea of hosting wind turbines five years ago, was sickened to discover his property had been trashed.

At Leonards Hill, cars were beaten with placards and shaken. Simon Holmes a Court’s children heard a man yell:  “I hope you all die of cancer.” A woman who had been a pillar of the local community was “stood over as the vile words were spat in her face:  ‘F… off back to Melbourne, you sanctimonious middle class c…!”.

At the Senate Inquiry, Holmes a Court, Chairman of the Hepburn Wind Farm submitted a leaked running sheet from the Australian Environment Foundation (AEF). It was addressed to the Guardians detailing the strategy for a protest at Leonards Hill including the signage held by the thug-like crowd of predominantly outsiders later captured in a photo.

The AEF is a known astroturfer, funded by vested interests, and whose use of a lookalike name and lookalike logo was the subject of a legal challenge by the Australian Conservation Foundation. AEF’s Executive Director, Max Rheese, was guest presenter at Trawool last month at the proposed Cherry Hill wind farm public meeting. Rheese is also Executive Director of another anti-renewables group, Australian Climate Science Coalition, one of the over one hundred climate skeptic astroturfers allegedly funded by Exxon (see Exxonsecrets).

Professor Simon Chapman has compiled a list of seventeen reviews of the international research literature on wind farms and health. All concur that whilst turbines might annoy a small number of people, they don’t make them ill. With over 200,000 wind turbines around the world, some existing for over thirty years, why would this hitherto unknown disease suddenly appear in the wake of Dr. Laurie and Dr. Pierpont? Professor Chapman suspects WTS is psychogenic ― that is, stress-related symptoms brought on by worry. 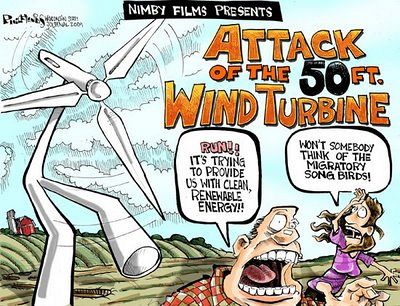 There are positive financial benefits for communities hosting wind farms. For example, PriceWaterhouseCooper’s analysis of ACCIONA’s Waubra wind farm forecasts an increase in Victoria’s Central Highlands gross regional product by $346 million (6.0%) over the long run with employment increasing by an average of 2.7% (1680 FTE jobs). ACCIONA Energy continues to contribute $64,000 (plus annual CPI increases) each year to the Waubra Wind Farm Community Benefit Fund.

But are the financial benefits getting out to those regions slated for future wind farms?

Dr. Laurie, her Guardians/skeptics road show and the anti-environment misnamed Australian Environment Foundation, has now made it all but impossible to cut through with the positives at any town hall debate. The question that needs to be asked is what is it they have to fear from a balanced debate and isn’t it time the Australian public was given a fair go?

* The author uses the American spelling of “skeptic” to differentiate genuine science sceptics from the ideological/vested interests-driven skeptic movement, which originated in the United States.

(An abridged version of this article was published in New Matilda earlier this week.)