DEVELOPED NATIONS would need to double or triple their current efforts to limit global warming to a “safe” level of 2⁰C.

That’s the finding of a study published on 26 October in Nature Climate Change assessing countries' post-2020 climate pledges ahead of December’s international climate summit in Paris.

Countries have agreed to limit warming to 2⁰C above pre-industrial levels. But how do we divide up the necessary reductions in emissions fairly?

Developing nations often argue that developed nations need to do more, because they are responsible for more greenhouse gas emissions historically.

This new paper shows that these debates about fairness will inevitably cause us to go beyond 2⁰C. However, it also shows a way to fix the problem.

You can read more in a Briefing Note, and all the underlying data is available on a new website, mitigation-contributions.org.

Are we on track for 2⁰C?

How much the world warms is determined by the total amount of greenhouse gases that go into the atmosphere — what’s known as the “carbon budget”. To have a 66 per cent chance of limiting warming to 2⁰C the Intergovernmental Panel on Climate Change shows that after 2011 we can only emit 1,010 billion tonnes of greenhouse gases.

Converting the budget to yearly emissions is not easy. However, by analysing hundreds of emissions scenarios, the new study found that to meet the carbon budget, global emissions need to be reduced to 1990 levels by 2030.

We are not on track for this.

The same conclusion was reached by a paper published in 2010, and more recently by Climate Action Tracker that projects 2.7⁰C of warming by 2100.

There is a whole raft of reasons why countries’ emission reduction efforts are insufficient. One key reason is the disagreement over what constitutes a “fair” share of the global emissions-reduction effort.

In the latest stage of climate negotiations, almost every country has pledged some form of post-2020 emissions reduction target. These pledges are known as Intended Nationally Determined Contributions, or INDCs, and reflect what countries see as their own fair share.

Countries’ views differ widely. However, they can be (crudely) simplified to two broad approaches (a similar simplification is found in another recent study).

Both approaches propose that countries emit roughly equal greenhouse gas emissions per person by some future date (say 2050 or 2070). “Distributive justice” proposes that all countries start from the present and converge at some point at the same level of per-capita emissions.

However “corrective justice” seeks to correct the unfair distribution in past emissions by requiring higher historical emitters to emit less per capita in the future (and perhaps even produce negative emissions). This essentially means that all nations have an equal sum of past and future per-person emissions.

The table below shows the emissions-reduction targets required of G20 countries from either a distributive or corrective justice approach (following the specific methodology described in the study).

All targets are expressed against 2010 levels.

Which should we choose?

In practice, each country chooses the justice approach that best meets its national interests. China, having a large population and low historical emissions, supports a corrective justice approach.

Australia, with a small population but high historical emissions, should prefer a distributive justice approach (although in practice Australia has never explicitly expressed a principled view of either type).

There can be no global consensus on which form of justice is most just. Unfortunately, when every country accepts the 2⁰C target but opts for a preferential treatment of justice, global warming exceeds 2⁰C.

One way to fix this is for countries to accept more stringent targets, providing that their main trading partners are willing to do the same, in relative terms.

Australia has argued that its climate policies and emissions reduction targets are adequate because they are comparable to those of other countries — a claim that has been examined and debunked. Following this logic, Australia should be willing to increase its targets if its peers accept to do the same.

Choose your own climate pledge

Such logic underpins a new approach to international emissions reduction allocations: “diversity-aware leadership”. Under this approach, one country becomes a leader by adopting ambitious targets.

Other countries match the effort, calculating commensurate targets based on either distributive or corrective justice approaches (whichever results in a more generous allocation for each country). Ultimately, no country does any “more” than any other country, and each country is free to choose its own definition of what is fair.

Obviously, not every country is a candidate for leadership — only a major economic power with strong geopolitical pulling power. The list is probably restricted to G20 countries.

How does this play out?

Potential leadership scenarios for the EU, the U.S., China and Australia would be:

How this looks on global pie charts:

The table below compares some targets actually proposed by countries with those consistent with a fair share under the different approaches. 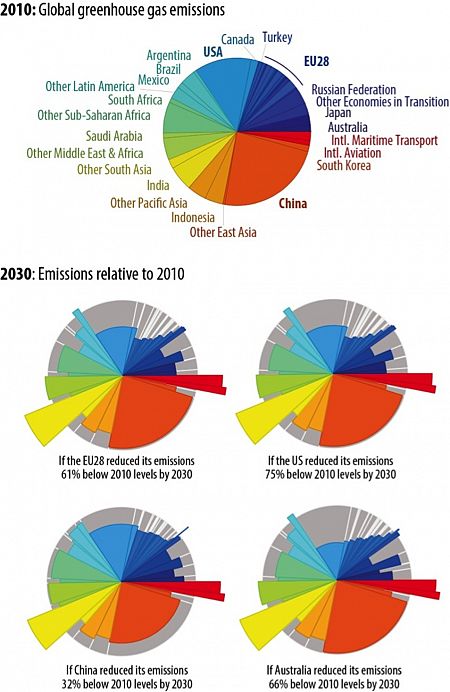 Clearly, none of these targets currently meet the criteria of a fair share, and they are all well below what might be required for leadership.

To claim good global citizenship, as a minimum, Australia would need to increase from 25% to 30% its current target (note: the announced Australian target uses a 2005 baseline, whereas this is compared to a 2010 baseline).

However, this would ignore the benefits Australia has gained from past emissions. Taking this into consideration, Australia’s fair share would represent a doubling (and almost tripling) of its current target. Similarly, Australia would need to almost triple its effort to be considered a climate leader.

In July 2015, the government’s advisory body, the Climate Change Authority, recommended that Australia commit to a target of -40% to -60% on 2000 levels by 2030. On 2010 levels this equates to a target of -41% to -61%. Although such a commitment would represent a significant increase in ambition, it still falls short of what might be required against the above criteria.

To read more on this paper see the Mitigation Contributions website or the Briefing Note for policy-makers.

Anita Talberg is a PhD student in Australian-German Climate and Energy College and Maite Meinhausen is Associate Professor in the School of Earth Sciences at Melbourne University.

This article was originally published on The Conversation under the title 'Most countries need to at least double their efforts on climate: study'. Read the original article.

Keep up with the latest on climate change. Subscribe to IA for just $5.