Time for a mining rehab tax

Lachlan Barker discusses Australia's broken mining industry and the urgent need for a mining rehabilitation tax to help pay for the mess left behind by (mainly) foreign owned mining companies.

LAST WEEK, a story appeared on the ABC online site reporting a leaked document showing that the financial assurance – known colloquially as a rehab bond – for Queensland’s coal mines was $3.2 billion short.

This raises a lot of questions, so strap in for a lot of maths to come in this article, as we try to sort this out.

First, we need to find the actual amount held by the Queensland Government for coal rehab.

There are three types of mining in Queensland, petroleum – which mostly means coal seam gas (CSG) – while mining for solid product is divided into coal and minerals (metals, clays, dolomite and so on).

In 2013, the Queensland Audit Office released a report listing the bond held as $736 million for petroleum and $4.45 billion for solid product mining, the proportions being 85:15 in percentage terms.

When I did my article in 2015 positing the case that coal rehab would cost $17.8 billion, I referenced a document from the Department of Environment and Heritage Protection (EHP) that has now disappeared (sadly) but solid product mining rehab bond was at that time $5.41 billion, while my memory tells me that petroleum was $935 million.

Extrapolating from those figures to today would give a breakdown of the $7 billion figure from Steven Miles into approximately $1 billion for CSG and $6 billion for solid product.

So, using that crude proportional approximation, we can have a guess that the current bond for coal mining in Queensland is $5.8 billion. With the report saying that coal was $3.2 billion short, this gives a figure required for coal rehab in Queensland as $9.2 billion.

Is that short? Is it ever and why do I say that? Well consider this, in the last five years open cut coal mining in Queensland has removed 9 billion cubic metres of overburden.

The report quoted in the ABC article, states that only 22.5% of coal destruction in Queensland has had any sort of preliminary rehab done on it.

So the case here, is that over the last five years, approximately seven billion cubic metres of overburden has not even had preliminary rehab attempted on it — dumped in out-of-pit spoil piles is the most likely fate of this rock and soil.

Since the basic manipulation of this overburden is with a dozer at the average price of $1.34 per cubic metre, then I make the case that somewhere out there in Queensland, there is seven billion cubic metres of overburden that has to be pushed with a bulldozer.

That means $9 billion right there, for basic overburden dozer push just from the last five years.

And, of course, that’s just the basic push. If some of the overburden is potentially acid forming (PAF) or sodic (salinity risk), that soil has to be placed in the middle of the benign overburden so it is not exposed to the air or water runoff which could then leach acid and/or salt into the water table.

This creates an extra complexity on replacing the overburden in the void — and adds to the cost.

Also there are tailings dams, reseeding, soil amelioration and all the rest of it, so I claim that $9 billion is a very basic minimum cost on rehab for just the last five years.

The current system that led to this appalling shortfall is irretrievably broken. As I’ve written before the mining companys' estimates of rehabilitation costs are invariably one tenth or worse of the true costs. After submission, the state governments of NSW and Queensland just sign off on it so they can get the royalty dollars rolling in.

This is how the report describes that:

A further problem is that the bond is usually in the form of a bank guarantee, which doesn’t work, because the bank is holding the risk, not the mining company.

Clearly, if the mining company has deposited cold hard cash with the state government in question, they would be a damn sight more keen to do the rehab properly to get their money back.

So what’s the solution? Well, clearly, it is time for a rehab tax.

Instead of doing an estimate (invariably understated) before the mine starts destroying the landscape, it makes more sense to pay a rehab fee per tonne as the mining company goes along. They have this in the United States, where coal companies pay US$0.35 (AU$0.46) per ton of open cut coal, and US$0.15 (AU$0.25) per ton of underground coal. (Note one metric tonne equals 1.1 tons)

The U.S. system has been rolling since 1977 and has worked very well.

Here is an example from Pennsylvania: 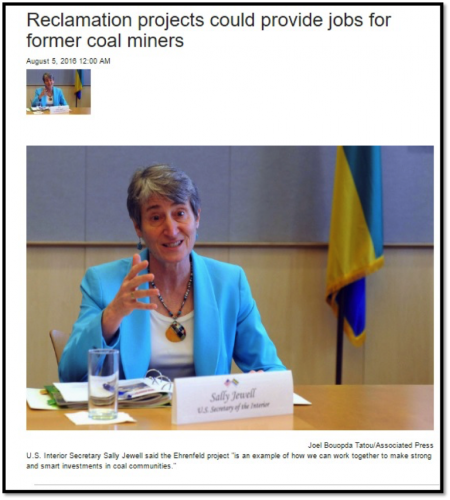 Last year, Australia produced 194 million tonnes of metallurgical coal and 251 million tonnes of thermal coal. So a rehab tax would have netted $541 million for that year. Going forward, if coal was paying half a billion a year into the rehab kitty, the Australian tax payer would not be left as short as currently feared.

This also cuts through the problem, currently rearing up, of coal companies selling their mine for $1 once it has finished its useful life to get out of doing the rehab. 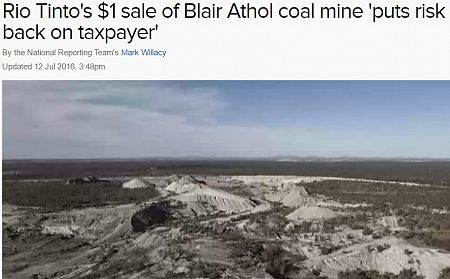 And if the coal companies want to start screaming that a 1% to 2% rehab tax will force closures because it makes the mine uneconomic, then I would suggest that mine has got far bigger financial problems than paying a rehab tax and was going to close anyway.

As for CSG, I would suggest $0.25 per gigajoule as, sadly, CSG cannot be rehabilitated.

Once the well is drilled, the aquifer is poisoned forever.

Indeed, some time ago I was talking with Gavin Mudd, environmental engineer of Monash University and I asked him about CSG rehab. He said in exasperated fashion:

‘How far down that rabbit hole do you want to run?’

A reference to the fact that CSG’s underground parts just cannot be rehabilitated.

The Petroleum rehab calculator on the Queensland government website only refers to the surface infrastructure, revegetating roads, capping wells at the surface, taking down pipes and compressor stations and jack-hammering concrete well pads for instance. Here the first four lines of the CSG “rehab” calculator: 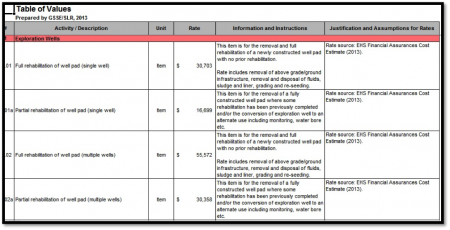 So the best thing for CSG would be that the industry pays for any farmer or community member whose life and land has been destroyed, and wishes to sell up and leave.

Since Queensland plans to export 25 million tonnes of LNG a year and there are 54.5 gigajoules per tonne, this would provide a fund of $340 million a year to buy out those that wish to leave the gas fields.

Final note: just as I was doing the research for this article, right on cue, we learn that a Western Australian National Party member Brendon Grylls is considering an extra tax on iron ore. This is not rehab related and more to do with GST revenue, but the sentiment is there. 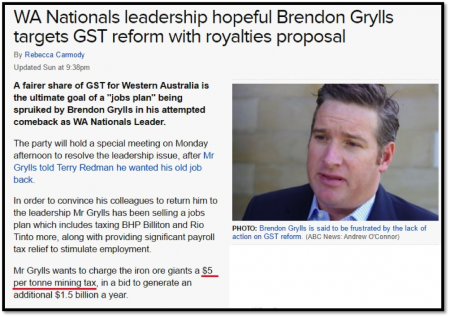 So that’s the story — largely foreign-owned mining companies make a good living out of destroying Australia and so it’s long past time they began paying a fairer share to clean up the damn mess.

The current system is broken beyond repair. It is time for a rehab tax.

As the mining boom recedes, taxpayers should be prepared for huge costs, says Michael West. https://t.co/Bqg7aVSuNb