Who will pay the more than $17.8 billion mining rehabilitation bill?

Mining does bring in revenue, but at the same time it is building up a monstrous damage bill, reports Lachlan Barker.

Queensland MP Jim Pearce caused an uproar among mining industry executives recently, by announcing that he was

“... concerned that, at this time in the history of coalmining in Queensland, I am unable with confidence to point to any mining company that deserves the right to mine.’’

He reportedly made this statement due to less than enthusiastic mine rehabilitation efforts, citing as an example of Rio Tinto walking away from mines that were only 20% rehabilitated.

So does Jim Pearce have grounds for his comments? Almost certainly, yes.

The figures indicate that Australia is building up to one unholy bill for mine rehabilitation.

Since 1990 in Queensland and NSW a staggering 37.3 billion cubic metres of overburden (minimum) has been removed to allow for open cut coal mining.

The charts tell the story: 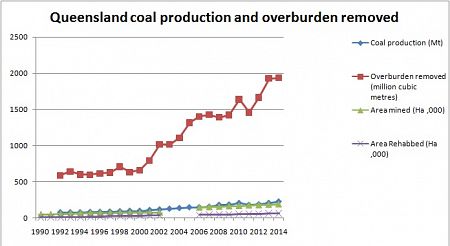 Overburden is the rocks and topsoil that are stripped away to allow the mining of the coal seams beneath. This overburden has to be put back in place as part of the rehabilitation process and clearly this amount of earth works is costly. Queensland’s contribution to the 37.3 billion total is 25.2 billion cubic metres of overburden removed since 1990.

So how much is left out there?

Well, the figures above from EHP for Queensland indicate that as of writing date 190,000 hectares have been mined, while approximately 66,000 Ha (35%) have been rehabilitated. If overburden replacement was part of this rehabilitation process, then that leaves 65% left to replace — or 16.4 billion cubic metres. 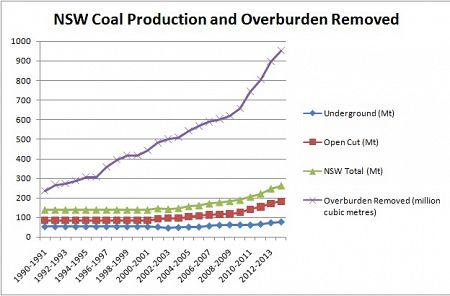 And what is the cost? Costing data from Queensland tells us that pushing earth at the most efficient rate – 550 m3 per hour – costs $375 per hour.

Please note: this is clearly not the full cost of rehabilitation. The costing figures for calculating the rehab bond for mining companies are long and complex. They involve earthworks, capping and sealing against Acid Mine Drainage (AMD), water issues, runoff, tailings dams, topsoil replacement, fertilizing the soil with gypsum, decommissioning fuel stations on site and a host of other things that have to be done to rehabilitate the land. Here are just six rows from the costing data spreadsheet’s rehabilitation section:

This figure of $17.8 billion is the barest minimum figure for simply starting the process of filling in the holes.

If that seems like a lot of money, consider that for the Mt Thorley-Warkworth mine in NSW, it is estimated that it will cost $2 billion over the life of the mine just to fill the final void. Mt Arthur up the road from Mt Thorley has a final void estimated one-and-a-half times as large and so may take $3 billion to fill.

Total income from coal, by the way, from all of Australia, to all governments – state and federal – for the last seven years is $55.4 billion (estimate by Cameron Amos at The Australia Institute). So, even beginning to fill in the holes would cost a third of coal’s entire recent income, it gives us some idea of the scale of the destruction going on.

We assume coal miners don’t fund most of the mine rehabilitation costs, it is externalised onto taxpayers via the government. This might seem unfair, but the history for Australia of 50,000 abandoned unrehabilitated mine sites tells us mining companies have a poor track record in compliance. 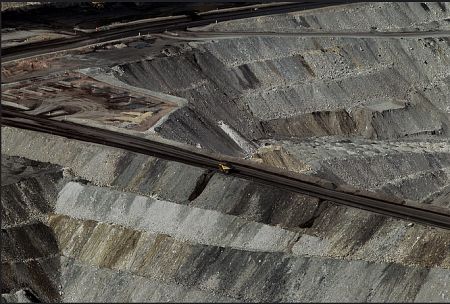 Mount Arthur mine – pictures like this make a $3 billion price tag to fill in the hole seem more than reasonable. (Image by D. Sewell / Lock the Gate)

Furthermore, companies will say they “have rehabilitated X hectares of land”. However, statements like these have to be treated with caution.

This is particularly relevant in the case the New Acland coal mine in Queensland.

New Hope is the company involved with this controversial mine on the lush Darling Downs. They have released glossy PR material showing that they have rehabilitated 300 hectares of land, which has been returned for cattle to graze upon. However, if you are a meat and dairy consumer, you would be unwise to eat anything that comes out of a cow that has been grazing on rehabilitated land.

I contacted environmental engineer, Gavin Mudd at Monash University in Melbourne to discuss the topic of mine rehabilitation. In the course of our discussion, Gavin made it clear to me that there is no clear meaning when a mining company says “that piece of land ‘X’ is rehabilitated”. Mudd explained that, due to the geological nature of the timeframes involved, you have to give it many years before you can categorically say that a piece of land has been effectively rehabilitated.

“You see, sometimes the Acid Mine Drainage – AMD – may not show up for years, so you need to monitor it for a long time — five, ten years, maybe even longer than that. Sometimes it takes that long. Everything may be operating fine on the ground and suddenly the water flow changes, or there is a bit of subsidence in the Earth, and the AMD may reappear.”

So even the above reported figures – 20% rehabilitated land for NSW and 35% for Queensland – may erode as time goes by. Furthermore, Gavin told me of a Roman mine in Spain that still has pollution affecting rivers from mining waste dumps today — 2000 years later.

In the case of Acland the cattle may graze happily for five years or so before, one sunny morning, the grazier will discover to their consternation that the grass has begun dying off and the local dams are beginning to show signs of lowered pH, indicating acid leachate is working its way through the system again.

So what’s to be done?

I contacted Tim Buckley a director of Institute of Energy Economics and Financial Analysis (IEEFA). Buckley has done a lot of research on coal mining in Australia and gave evidence as a financial expert in the recent objection to the Adani mine in the Galilee Basin in the Queensland Land Court.

Buckley’s view is that it is time to call in the unfunded rehabilitation liabilities and for governments, state and federal, to order the mining companies to begin doing more – and more realistic – rehabilitation now.

As he told me:

"Rehabilitation is obviously best done while the mine is a going concern, all the equipment, bulldozers, excavators and the like, are onsite and the staff are there to operate them. Also, most importantly, the coal mining company is profitable and hence has the cash to actually fund the rehabilitation. Waiting till the coal is gone and the dividends are all paid out to shareholders means it is too late. Rehabilitation is a great way to employ skilled miners laid off by the structural decline of seaborne thermal coal."

In the case of a new mine proposal, Buckley says:

“Before a new mine is approved, an independent expert should be required to do the full projections of rehabilitation costs, and it should be compulsory for the mining company to put this money into a government trust up front."

The current situation is far from this with the Queensland government holding $5.41 billion against mining.

I contacted the Department of Resources and Energy in NSW and learned that the NSW government holds:

‘... approximately $1.8 billion in security for mine rehabilitation with this fund covering all mining across NSW.’

Clearly, these bonds won’t even cover half the cost of just filling in the open cut coal holes.

The most likely outcome is sadly that these foreign mining companies – mining companies in Australia are 83% foreign owned – will wreck the land, take the profits and then walk away from the mess, leaving the tax payer to pick up the bill — if it gets paid at all. This will leave Australia with a load of acid mine leeching holes all over the landscape.

How the truth hurts.Mining industry uproar over comments by MP Jim Pearce that not one company deserved right to mine http://t.co/wyzvK5cwmV

So these figures show Pearce is certainly justified in his comments, with Rio Tinto’s official figures even less than the 20% he estimated. So, Pearce is doing the right thing by the Australian taxpayer by calling attention to the amount of mine rehabilitation needed in Australia today.

Mining does bring in short term revenue, although this revenue from coal is decreasing every year, but at the same time it is building up one hell of a damage bill.

It seems time for Australia to stop open cut coal mining without ongoing and genuine rehabilitation. We just can’t afford it any longer.

Why bother with QRC tantrums? Not just Jim Pearce who has had a #gutfull with #Mining. http://t.co/eaFaiNWh9P #qldpol pic.twitter.com/p0C4Z7CaGB

When you're in a hole, stop digging. And subscribe to IA for just $5.