Why do corporate lobby groups like the IPA and fossil fuel front organisations like the Waubra Foundation retain 'deductible gift recipient' status, while genuine environmental charities like the Australian Conservation Foundation face having theirs stripped away by the Abbott Government. Sandi Keane investigates.

FOR AN ORGANISATION that has been touting 'low taxes' for sixty years, the Institute of Public Affairs (IPA) sure delivers big on tax benefits to its major donors, especially Big Mining — which is already heavily subsidised by Australia’s taxpayers (note graphic below right).

Some, like Glencore, not only enjoy such subsidies but have no qualms about paying zero tax. These are the true “leaners” we tax-payers have to “lift”, as this article will show. 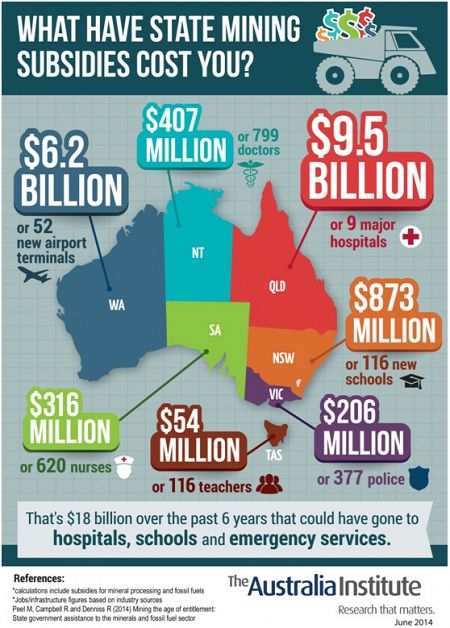 If your product (such as coal and tobacco) results in harm to man, beast and/or planet, why risk being mauled by the mob when you can hire a pressure group like the IPA to fudge the facts? Furthermore, your donation is tax deductible!

In 1987 the IPA restructured itself as a company limited by guarantee, which means that its directors are not liable for any debts it might incur. The restructure enabled it to apply to become an Approved Research Institute (ARI) and thus be eligible for endorsement as a deductible gift recipient (DGR). In other words, donors to the Institute would be able to claim a tax deduction for their donations. DGR status is the most valuable asset of an organisation like the IPA because without it virtually no-one would donate.

So, when the IPA are out there spinning the facts on climate change, tobacco or GMO foods, we, the taxpayers, are subsidising the service through tax-deductions for IPA’s donors as well as providing free carriage of their message on our taxpayer-funded ABC.

The IPA’s media savvy guarantees a positive sound bite and millions of dollars of free publicity as a ‘credible commentator’.

The most egregious example of this is the use of taxpayer-funded ABC as a vehicle.

How often does the IPA appear on ABC's The Drum, Q&A, 7.30, Lateline and ABC Radio National to hammer home its paymasters’ agendas? That’s wall-to-wall media exposure for starters. Not a bad return on your investment?

A good example of this, as I have written, was when former IPA pin-up boy Tim Wilson stormed the airwaves trying to scare the public witless about the Gillard Government’s audacious plain packaging plan.

But we don’t even know the exact tax-leaners for whom the IPA are spin-doctoring, since the IPA guarantees anonymity.

Fortunately, Sourcewatch has done significant work into the IPA's funding and relates the following:

The IPA has heavily relied on funding from a small number of conservative corporations. Those funders disclosed by the IPA to journalists and media organisations include:

In 2003, the Australian [Howard] Government paid $50,000 to the Institute of Public Affairs to review the accountability of NGOs.

The usual line-up of neo-lib nostrums, climate contrarians and carpetbaggers feature: Ian Plimer, Andrew Bolt, James Delingpole et al — each looking more like Comical Ali every day, rabidly denying the bleeding obvious and getting funded by the taxpayer to do so.

It is nothing short of perverse.

It becomes more so when you consider the requirements for an 'Approved Research Institute' eligible to be a 'deductible gift recipient', as Professor Hamilton further detailed in 2012 about the shysters from the IPA:

In order for the IPA to become a DGR it had to apply to the Secretary of what is now the Federal Department of Innovation, Industry, Science and Research giving various undertakings.

It must also ensure that all disbursements ... are evaluated and approved by "a suitably qualified research committee" of at least five members, the majority of whom are appropriately qualified in the field of research that is to be undertaken or have appropriate experience in reviewing research, and who should be nominated on the basis of their "proven ability to direct a research program". As far as I can tell, the IPA has not made public the membership of its research committee.

The rules state explicitly that tax-deductible funds may not be used for "the organisation of conferences, congresses and symposia and the publication of information (other than the results of the ARI's own research work, undertaken through this program)."

All of this raises the question of whether donations to the IPA for which the donor has claimed a tax deduction are being used in compliance with the law.

But here’s the real rub.

This was kind of inevitable after the Queensland LNP voted to ban the teaching of climate science in the schools because it “poisoned children’s minds”. Really.

Now the Abbott government plans to abolish tax-deductibility for genuine charity organisations like the Australian Conservation Foundation, Friends of the Earth and The Wilderness Society. Why? As stupid as this may sound, because these groups are engaging in activism!

But I really do need to clear the pigs for take-off when it comes to the Waubra Foundation.

Like the mining-funded IPA wants to stop regulation on the big polluters, the Waubra Foundation wants to stop wind farms replacing coal-fired power. Its chairman, Peter Mitchell, who made his fortune from mining, also set up the Australian Landscape Guardians.

Lowell Resources, as its name would suggest, seeks investment in mining and fossil fuels and

'... concentrates the experience and knowledge of a group of individuals who have direct working experience in the oil & gas and minerals industries...'

Apart from sharing links to mining interests and the Liberal Party with the IPA, the Guardians enjoy the promotional support of the IPA’s own astroturfer, the Australian Environment Foundation. (My full investigation into the Guardians and the Waubra Foundation was used as the basis for a longish speech to Parliament.)

Only a halfwit could take seriously the Waubra Foundation’s totally-debunked claims, through at least 22 reviews, about 'wind turbine syndrome'(WTS) — a concocted illness, unheard of in the northern hemisphere where they’ve had wind farms for forty years.

This year, the National Health Medical Research Council again found there was no reliable evidence that proximity to wind farms directly caused health effects. This conclusion was supported by the Australian Medical Association.

Professor Simon Chapman believes WTS is a classic psychogenic illness. He has written widely on the “nocebo effect”. In effect, wherever Waubra's 'medical director' Sarah Laurie goes on her fear and smear campaign, the 'disease' follows in her wake.

'... health promotion charity .... [whose] principal activity is the prevention and control of disease in humans.'

Seriously, ATO, are you kidding?

When these anti-wind activists (there’s that word again) used tax-deductible donations from you-know-who to start funding campaigns against wind farms, outrage broke out amongst the Greens, Labor and environment groups.

The Australian Tax Office and the Australian Charities and Not For Profit Commission (now about to get the chop from the Abbott government in its rampage against all regulators) are now reviewing Waubra’s charity status.

Change is only possible if people are informed about the facts. Social media is the most effective tool to get the word out. If you are outraged by the unfairness of mining-funded spin outfits getting charity status whilst environment groups face losing theirs, compel the ATO to respond by lodging an official complaint.

Update: As a result of a campaign by the Greens and work of investigative journalists like Sandi Keane, the Waubra Foundation had its charitable tax status revoked in December 2014, five months after this article was published.

#lateline The #lieberals not a charity - what about the IPA? pic.twitter.com/ThkuUWGiFh