SUBSCRIBE   DONATE LOGIN SHOP
SUBSCRIBE   DONATE
How we prevented a Morrison dictatorship
How Howard screwed the Libs
U.S. site tries to ruin what makes fairy bread great
Bloody Idiot of the Week — Episode 28: Get used to it
Morrison's 'politics of retribution'
Agriculture

The battle against Shenhua ramps up: Koalas vs Coal incites civil disobedience

The pitched battle against Shenhua ramps up with legal action over koalas and threats of civil disobedience. There is a solution to this battle royal if the Abbott and Baird governments for once put public opinion before the demands of their political paymasters — Big Mining. Lachlan Barker reports.

THE PRESSURE to overturn the federal approval of the Shenhua coal mine on the Liverpool Plains of NSW is ramping up with community members threatening further legal action and civil disobedience if required.

While some in the area support the mine, those “against” outnumber the “for” proponents twenty to one. A poll run by the Namoi Valley Independent shows 4,300 votes at writing date, with 4,132 (96 per cent) against the mine.

However, further adding to Shenhua’s problems with this hideously unpopular mine is that it is already in court at state level.

For the mine to proceed, it needs not only federal approval, but a licence granted by the NSW Government. This licence cannot be granted until the current case before the NSW Land and Environment Court is settled.

The particulars of that case are that the Upper Mooki Landcare Inc group is making representation through the NSW Environmental Defenders Office (EDO) over threatened species, koalas.

These are judicial review proceedings arguing that the NSW Planning Assessment Commission (PAC), which approved the mine on behalf of the NSW Minister for Planning, failed to properly consider whether the mine was likely to significantly affect Koalas, a threatened species, as required by the Environmental Planning and Assessment Act 1979 and the Threatened Species Guidelines.

If the mine goes ahead it will clear 847 hectares of koala habitat.

Further, the Upper Mooki group contends that the Planning and Assessment Commission (PAC):

‘... failed to assess whether the mine would place a viable local population of Koalas at risk of extinction, as required by NSW Environmental Planning and Assessment Act 1979.’ 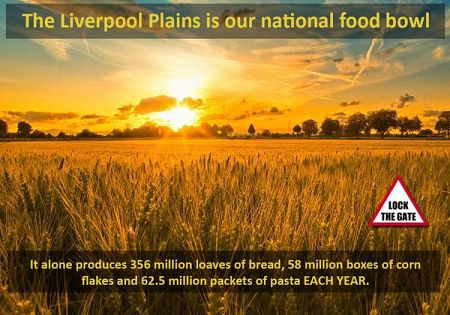 Koala numbers have descended drastically in the modern era, estimated as down by a third in NSW in the last twenty years.

Then we come to familiar territory when it comes to the resources industry and its hopelessly unreliable (or deliberately manipulated) facts.

The Australian Koala Foundation estimates that there are only 800-1,300 animals in the Gunnedah Local Government Area.

Shenhua's contention that the koalas in the area can be “encouraged" to move away naturally is totally unrealistic.

As the EDO writes:

The plan for managing the impact of clearing 847ha of the Koala habitat noted in the PAC’s report is that “the animals will be encouraged to naturally move away from the habitat that is being cleared. If the animals do not naturally move, then a translocation plan will be implemented".

There was evidence before the PAC that translocation programs have resulted in significantly high mortality rates.

Even the NFF are opposing #Shenhua. pic.twitter.com/E7ixFzstdZ

The NSW State case will go before the Land and Environment Court on 31 August.

Commonly, a decision from the presiding judge will take a few months, though there have been complex cases where the findings took up to a year.

If the finding is for the Upper Mooki group and against Shenhua, then the mine cannot proceed as it only has Federal approval in place.

If the finding does, indeed, go against Shenhua then the most likely outcome is an appeal — a favoured ploy of the miner.

I refer the reader here to the case of Wendy Bowman and Chinese coal giant Yancoal at Camberwell in the Hunter Valley of NSW.

There, the coal giant wished to further and utterly lay waste to the area with an extension to their open cut mining activities. To do so, they needed to acquire local resident Wendy Bowman’s property.

However, since 2011, the Land and Environment Court has turned down Yancoal’s proposal(s) three times now — most recently in April this year.

So what Yancoal do is re-appeal to the court every time they lose. The latest re-appeal is set down for 15 July this year. Re-appeal is clearly not a technically accurate usage, but it better describes Yancoal’s unwavering attempts to mine Wendy Bowman’s property.

It’s appalling behaviour from Yancoal. Clearly their aim is to destroy Wendy Bowman, and her home, by attrition.

Thus, out on the Liverpool Plains it seems likely that if Shenhua lose the case at the NSW Land and Environment Court, they'll resort to amending their proposal and trying again.

However, if it’s money that keeps Shenhua focused on destroying the Liverpool Plains, then Greens agriculture spokesperson Jeremy Buckingham has a solution to this protracted nightmare:

Via a Greens press release, Buckingham states that:

‘The NSW government should give Shenhua back its $300 million and ask it to abandon plans to mine coal in the heart of the fertile Liverpool Plains.’

Buckingham adds that the Shenhua company could recover a significant proportion of the $700 million it has spent on the project.

He outlines this plan thus:

'If Shenhua are paid back the $300 million exploration licence fee and sell the $200+ million worth of farm land they have bought, they should recover up to $500 million of the $700 million they have spent, allowing the company to protect its reputation and save money.’

This seems an admirable solution. Shenhua get their money back, the residents of the north west of NSW get the Liverpool Plains back, the koalas get their habitat back and the Australian public gets it future food and water security back.

Thus (sadly) given the Baird and Abbott governments love of invariably overinflated projections of money from resources projects and the need for a sluicegate for corporate campaign contributions, this fight will be going on for some time yet.

If you think it’s dumb and irresponsible to mine prime farmland and destroy an important koala habitat for a commodity that is fast going out of date, you might like to sign Change.org’s petition here.

Want something to do? Sign our petition or visit our website https://t.co/epMXiVV3rn #auspol No Shenhua mine pic.twitter.com/fngx4DhMa3

The Gunnedah district is home to the largest inland population of koalas in NSW. Read IA’s story by Dr Oisin Sweeney, ‘Koalas for coal: Will it come to this in NSW?’. Lachlan Barker blogs at cyclonecharlie88.blogspot.com.au and you can follow him on Twitter @CycloneCharlie8.

Want to know why insane decisions like #shenhua are made? Read this #Corpocracy https://t.co/6rwZocztPN pic.twitter.com/UvhphoO4yK