A prime example of the rubbish spread by fossil fuel fans was an opinion piece by Liberal Democrat senator David Leyonhjelm published in The Australian, writes Lachlan Barker.

WHAT HAS BECOME CLEAR to me in this debate about scrapping the Renewable Energy Target (the RET) is that the Federal Government and the conservative state governments, have been massively successful at spreading the message that the RET is a bad thing.

And a prime example of this was the rubbish printed by The Australian on August 27, 2014 in an opinion piece by Liberal Democrat senator David Leyonhjelm.

This piece was entitled:

When I returned to reread this piece for this article, I was astonished to discover that the full article was no longer visible on the Oz website, and was now hidden away in the ironically titled ‘Premium Content’ section.

As you’re about to see, if this rubbish from the senator is premium content, I dread to see what’s non-premium.

However, I found another link to the full article, if your blood pressure is too low, you can read it here.

It’s an oddly ordered article, but the fifth paragraph gets to the nub:

The repeal of the carbon tax will help, but studies show that the RET has an even greater impact on the bottom line, reducing our living standards and the competitiveness of our entire economy.

Above that is a spray about Queensland, saying:

The latest figures from the Australian Bureau of Statistics show that in the five years to June 2012, Australia's retail electricity prices rose by 72 per cent with even higher increases in Melbourne and Sydney.

The Queensland Competition Authority's annual report revealed recently that 344 households were disconnected every week in the Sunshine State because of non-payment of electricity bills.

So, my first port of call was to check out this figure of 344:

I got onto the Queensland Competition Authority and the helpful media rep there, Richard, directed me to the relevant report.

I did the maths and the figure was approximately accurate; 307 was the number I came up with.

However, I checked with the two largest providers of electricity connections in Queensland, Energex and Ergon, and learned from Graeme at Energex and Rob at Ergon, that in the same period the two companies were connecting approximately 340 new households.

Thus for almost every disconnection, there was a new connection, hardly the-RET-is-bringing-the-economy-to-its-knees affect that Leyonhjelm is trying to make us believe.

What’s more, trying to lay electricity disconnections at the feet of the RET is a staggering leap of illogic — as it is well known, if power prices are a problem, the poles and wires component is a far bigger issue, as this graphic from the Ergon Annual Report 2013 demonstrates: 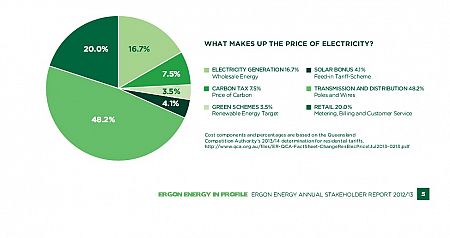 While in NSW this story in the Sydney Morning Herald indicates that, of the 100% power price increase over the last six years, 55% of the increase is due to network charges — improving the poles and wires for transmission of power.

What’s more, the website of the Queensland Competition Authority, on its electricity prices page, says this:

The main cost is that of networks, or the ‘poles and wires’, which deliver electricity from power stations to homes.

The carbon tax and green schemes are government policies that add costs.

But I certainly didn’t see the poles and wires component mentioned in Leyonhjelm’s article.

Leyonhjelm then goes on to say:

The dramatic surge in power bills has been a major factor in the decline of our manufacturing sector and the loss of thousands of jobs.

Other factors in the decline of our manufacturing are the ongoing effects of the GFC, the strong Australian dollar and the dramatically lower labour costs in factories in developing economies.

Professor Phil Lewis, director of the Centre for Labour Market Research at the University of Canberra, told ABC Fact Check in an article updated March 3, 2014, that:

“Jobs in manufacturing have been declining for decades.”

And I’m sure you’re here already, but what about the thousands of jobs created by the RET?

The Clean Energy Council estimates 18,400 new jobs by 2020 if the RET is maintained in its current form.

A report from the accounting firm Deloitte shows the RET will stifle the economy, cost jobs and drive up prices, and is a very inefficient means of reducing greenhouse gas emissions.

It concludes that abolishing the RET would increase real GDP by $29 billion in net present terms relative to the RET continuation.

So I found the Deloitte report that the senator refers to, you can read it here.

However, there is really no need, because what do you think I found on the title page? 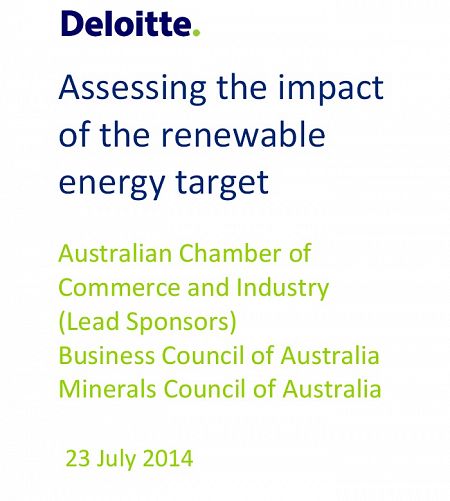 So this report is sponsored, in part, by the fossil fuel industry — the people with the most to gain from seeing the RET scrapped for good.

So I contacted David Leyonhjelm’s office and asked why they didn’t mention that the report was sponsored by the minerals council.

Here is the response:

Because this is clearly stated in the report, and when information is publicly available it does not always need to be declared.

To use the same logic, it might be relevant to declare in each article you write on the subject that you used to work for Greenpeace, or that the Independent profits from renewable energy industry sponsors - however, it's just not necessary.

Make of that what you will, but it is beyond belief to expect the readers of Leyonhjelm’s piece to not wish to know that the information he relies on comes from a vested interest.

I contacted our editorial team and enquired about advertising here at IA.

It's a bit of a stretch for Leyonhjelm to suggest that someone who spends a  few hundred dollars with us on an ad has any editorial influence.

Anyone can advertise with us, providing that they are an ethical organisation.

We don't have any renewable industry sponsors, though a solar company did advertise with us at one time, not any more.

Almost all our advertising comes from Google. We have, in fact, run advertisements for the Liberal Party and The Australian newspaper on IA through Google.

So tell him to stick that up his jumper.

However, David Leyonhjelm is a politician with a barrow to push, in this case (it would appear) to protect the profits of the fossil fuel industry, so I understand why he wrote this blatantly one-sided piece.

What I couldn’t understand is why The Australian published it.

So I decided to see what they had to say for themselves.

I learned that the person responsible for putting Leyonhjelm’s piece to press is the Opinion Editor, Rebecca Weisser.

So I emailed Ms Weisser and asked:

...why did David Leyonhjelm not mention in his piece that one of the sponsors of this report was the Minerals Council of Australia?

Leyonhjelm then goes to say:

It is undisputed that despite being a mature technology the wind generation industry is not viable anywhere in the world without government or customer subsidies. It is just government- mandated corporate welfare.

More than a quarter of South Australia's electricity was generated by wind in 2011, up from 18 per cent in 2010.

Also, the Renew Economy website tells us that for a week in August 2013, 47% of South Australia’s power came from wind.

And shadow environment minister, Mark Butler, said this at the Clean Energy Week Conference in July this year:

Leyonhjelm then ends with this truly extraordinary spray:

If Labor, the Greens and Clive Palmer really care for social justice they will not allow working families, pensioners and the disadvantaged to be ripped off by wealthy wind generators and will back the abolition of the RET.

I checked the list at Forbes of Australia’s top 50 richest people.

Gina Rinehart is at the top, with $17.7 billion — source of wealth: mining.

Renewable energy is not the source of wealth of any of Australia’s top 50 richest people.

So, in the end, this piece by Leyonhjelm sums up nicely how the voices of, and for, the fossil fuel industry have been so successful in demonising the RET and before that, the carbon price, as the ultimate destroyers of Australia’s economy.

That Monday’s business report was entitled:

‘The week in finance, featuring GDP numbers, mining and the RET’.

At the end Sheryle said this:

“The crazy thing about all this is that there was a cheaper way than the RET to reduce Australia's carbon emissions and it was the carbon tax. Next year it would have dropped from US$23 a tonne to less than $US10 a tonne.”

And of course, the Federal Government has already demonised, then quickly and with extreme prejudice, dispensed with that.

Great speech from @RichardDiNatale on impact in Vic of scrapping RET. We will introduce VicRET to support industry http://t.co/6EDVhsMU5s