In the final part of his compelling series on the end of neo-capitalism, Peter Johnstone says — the long and debaucherous world party is over, but don't just take my word for it...

Read part 1 : ‘Why we keep partying while the world around us burns’.

Read part 2: 'Partying like it’s the end of the world'.

‘The most striking thing about modern industry is that it requires so much and accomplishes so little.’
~ EF Schumacher

The party is over. But I’m not the first person to say we need to better the way we treat and utilise our world and its finite resources.

There are, indeed, a considerable number of books and writing that have made the same demand: we need to subordinate the economy to the needs of the people, first for our sheer survival and, secondly, for our own well-being.

Below is a brief outline of some of it, from 1923 to the present day. Much of this material deserves far more attention than it receives today. 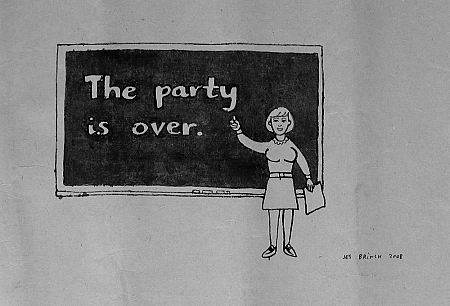 (writing in Civilization and Ethics, 1923)

Albert Schweitzer followed on from Charles Dickens, Karl Marx, and others with the radical premise of the imminent crisis of Western Culture and the debunking of the myth of progress and general happiness in our industrial society. He recognised the decay of human society and the world through the practice of industrialised life.  In this famous work, he wrote:


‘It is obvious to everybody that we are in the process of cultural self-destruction. What is left is also not secure any more. It still stands because it was not exposed to the destructive pressure to which the rest has already succumbed.’

He postulated the necessity for a Renaissance of collective life that would be organised by the spirit of solidarity and reverence for life.


‘The only meaningful way of life is activity in the world; not activity in general but the activity of giving and caring for fellow creatures.’

In 1974, he published ‘Mankindat the Turning Point’ with Eduard Pestel (Dutton, Second Report to the Club of Rome).

While the text uses the generic ‘Man’ and ‘he’ of the time, Mesarovic and Pestel demand a ‘new world consciousness:

They conclude that without these fundamental human changes, ‘Homo sapiens is as good as doomed.’

The economist E F Schumacher writes in his book ‘Small is Beautiful’ (1973):


‘Economy as a content of life is a deadly illness because infinite growth does not fit into a finite world. That economy should not be the content of life has been told to mankind by all its great teachers; that it cannot be is evident today. If one wants to describe the deadly illness in more detail, one can say that it is similar to an addiction, like alcoholism or drug addiction. It does not matter too much whether this addiction appears in a more egotistical or more altruistic form, whether it seeks its satisfaction only in a crude materialistic way or also in an artistically, culturally, or scientifically refined way. Poison is poison, even if wrapped in silver paper. If spiritual culture, the culture of the inner Man, is neglected, then selfishness, like capitalism, fits this orientation better than a system of love for one’s fellow human beings.’

2052: A Global Forecast for the Next Forty Years, by Jorgen Randers, launched by the Club of Rome on May 7, 2012, raises the possibility that humankind might not survive on the planet if it continues on its path of over-consumption and short-termism.

In the report, author Jorgen Randers raises essential questions: How many people will the planet be able to support? Will the belief in endless growth crumble? Will runaway climate change take hold? Where will quality of life improve, and where will it decline? Using painstaking research, and drawing on contributions from more than 30 thinkers in the field, he concludes that:

The Report says the main cause of future problems is the excessively short-term predominant political and economic model.

“We need a system of governance that takes a more long-term view,” said Professor Randers, speaking in Rotterdam.


“It is unlikely that governments will pass necessary regulation to force the markets to allocate more money into climate friendly solutions, and must not assume that markets will work for the benefit of humankind”.

‘I tried one day to count all the energy expended, the sum of forces multiplied by the distance covered.
And also all these useless things we do so diligently.
But I was told: "that's how the system works".
And I saw clearly that everyone: the happy, the discontented, the reasonable, the pragmatic, the well-off, the middle-class and often even the rebellious, they all love the system. As it was unanswerable, I didn't count anything anymore.
In the meantime, the sea is rising.’
~ Marc Jachym Les Ulis, France