Re-Powering NSW 2016 Conference: As long as it is coal, gas and nuclear

Lachlan Barker reports on the fossil-fuel-driven agenda of the NSW conference, Re-Powering NSW 2016, which concludes today.

THERE'S A conference currently on in NSW looking at the future of power supply in NSW.

Titled Re-Powering NSW 2016, at first glance one might have thought that this would be a sensible look at integrating greater percentages of renewable power into the NSW energy mix, however those thoughts quickly vanish once we took a close look at the program and see the rubbish being put up.

To begin with, the first thing that gives pause for thought is the logo.

You can see the similarity of the NSW government logo with the conference logo:

Clearly this logo is out to create the impression that this conference is closely linked to the NSW Government.

This is not the case. In reality, it's the fossil fuel mouthpieces who are running it.

However, since the NSW government of Mike Baird considers only gas and coal viable energy sources for NSW, the similarity of the logos doesn't surprise. Nor would it be a surprise if we subsequently learn that a graphic designer working for the NSW Department of Resources and Energy did the artwork for the conference.

So to the conference program.

First speaker is Paul Italiano of Transgrid, with among his topics:

'Leveraging technology and innovation to accelerate the connection of renewable resources'.

Sounded good enough. Then Ross Garnaut with (among other bullet points):

However, just before we get the idea that this conference might actually find renewables a good idea, the morning's session concludes with Innes Willox of the Australian Industry Group. This piece of work was last seen monstering mentally ill part-time truck driver Duncan Storrar on Q&A.

His topic title is:

'Re-Powering NSW in the interest of consumers'.

For which you need to read: Making sure consumers of power in NSW continue with the erroneous idea that only coal and gas can provide cheap power.

Then a panel discussion as seen here: 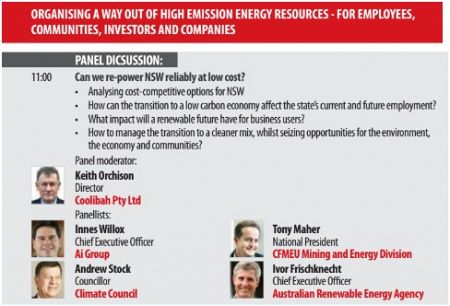 Sure, some renewable people are there, but whenever you see that tag "low cost" it means we only want to re-power NSW with coal and gas.

Then Frank Jotzo of the ANU has an input, he is generally aligned with renewables, so some good stuff there: 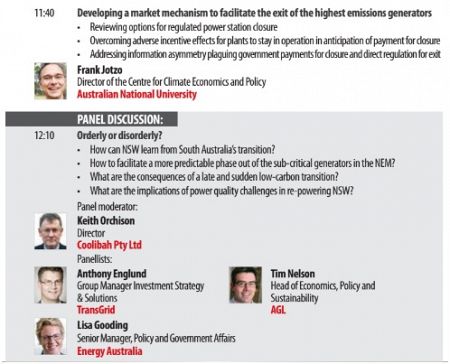 But then we go immediately over to doing what the Federal Government and the Murdoch Press have been doing constantly ever since the last coal fired power station in South Australia, Port Augusta, was decommissioned: bashing South Australia for having the temerity to remove coal from the energy mix.

You’ll note all the panelists listed are fossil fuel people one way or another.

So then on to the afternoon of day one, by which time, all pretence has gone and we learn that the true title of this conference should have been: How do we keep burning coal and gas so a small number of monopoly companies can retain their profit margins. 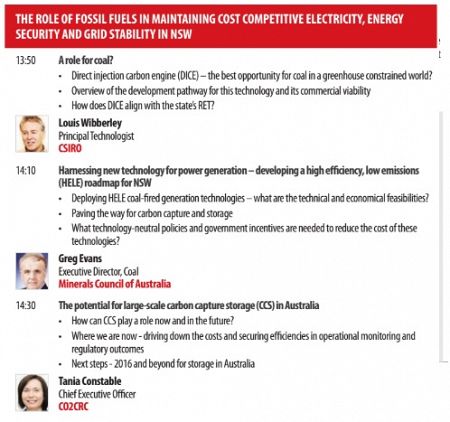 God almighty, I thought we had dealt with the Direct Injection Coal Engine (DICE) long ago. This dud without wheels was best dealt with by Paddy Manning on Background Briefing. Claimed by Greg Hunt, the then environment minister, that this engine was a major project and solution for low emissions, this engine has been found to not work for many reasons. But the main one is that the solid coal particles quickly pit the cylinders with impact damage, giving the engine a half-life of about 30 seconds of operation before the metal in the head has to be replaced.

Then we go back to that other utterly fanciful dud idea – that, again, it was thought had been permanently given the boot – Carbon Capture and Storage (CCS). Impractical, expensive to build and operate and increasing the cost of power, this idea will just never work.

Yet these fools keep pumping this idea more as a marketing ploy to keep mining coal than any real hope it will provide meaningful cheap and sustainable emissions reduction.

Then, following a discussion of CCS – to which we hold the eternal, yet unlikely hope that someone will finally kill this too-silly-for-words idea off – we proceed to saying what a great idea gas is: 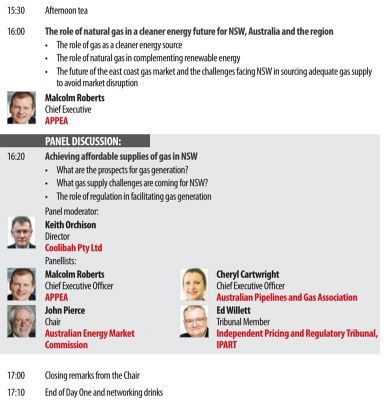 Malcolm Roberts of the Australian Petroleum Production and Production Association (APPEA) will no doubt get up and announce that the only solution for clean power in NSW is large amounts of insanely emissions intensive CSG fields all over the place and the other panelists from the gas industry will fulsomely agree.

The last day dawns and we go into: 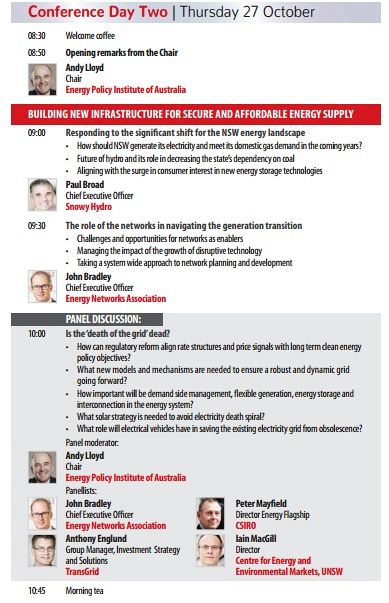 Whenever you see the words "secure and affordable energy supply" at a conference like this – once again – it means how can we keep NSW tied down to gas and coal.

The top line is a give away: ‘How should NSW generate its electricity and meet its domestic gas demand in the coming years?’  Once again, we can expect the solution to be to destroy large parts of NSW's prime farmland with CSG and/or digging enormous coal mines.

Then 'The Environment for Investment': 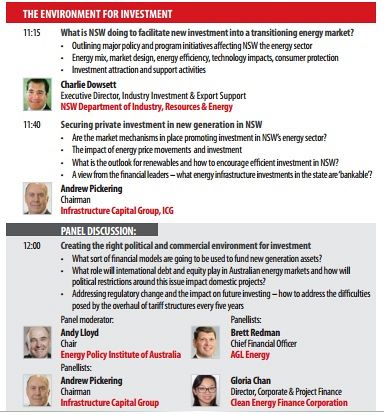 In which the voice of Gloria Chan of the Clean Energy Finance Corporation (CEFC) will be drowned out by the other panelists telling us that investment in gas and coal is not a subsidy, while but investments in renewables is.

Then our hopes go up considerably with the next empanelled discussion: 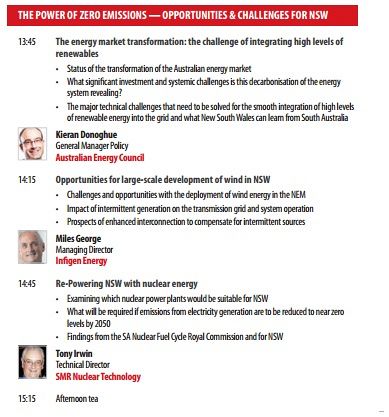 Zero emissions! Surely we are going to finally hear renewables only is the way forward?

Kieran Donoghue and Miles George get to present their ideas. But before anyone can run away with the idea that genuine renewables are the answer, the panel is brought back to “normality” by hearing that if we want zero emissions, it has got to be nuclear.

Clearly, the reason nuclear is and will always be a bad idea are too manifest to deal with here, so we’ll say it with one word: "Fukushima".

Then we close with a final two panels: 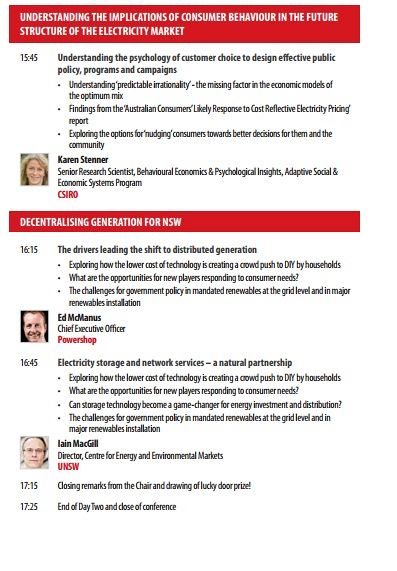 The top one evinced no end of interest with the title:

'UNDERSTANDING THE IMPLICATIONS OF CONSUMER BEHAVIOUR IN THE FUTURE STRUCTURE OF THE ELECTRICITY MARKET'.

After all that, we end on a positive note which is pleasing to see.

This refers to the use of smaller smart grids and Powershop are a renewable energy retailer, so that’s good. Then Iain MacGill of UNSW on batteries and how they can be a game changer.

So all good at the end but, even there, we have some reservations. Anyone who has attended a conference like this will know that by the time Ed from Powershop and Iain from UNSW come on, it is winding down to the 5pm close of the conference, so the bulk of attendees will already have gone home. Those still there will be eyeing the bar and another "networking" session over a few glasses of ale.

There are some positive bits scattered here and there but, quite frankly, any conference that discusses the DICE engine, carbon capture and storage and nuclear power as even remotely serious options reinforces what the agenda of this conference was: only coal, gas and – I choke as I type – nuclear are viable options for power in NSW.

Sheesh (for the last time).

Keep up with the COAL-ition! Subscribe to IA for just $5.