The Coalition's latest brainsnap of flogging Carbon Capture and Storage (CCS) as a solution to CO2 emissions from coal-fired power stations will set the taxpayer back an eye-watering $209 billion, says Lachlan Barker.

YOU MAY have in your time seen one of those schlock horror teen kill movies where no matter what you do to the psychopathic killer, he just keeps coming back to life and threatening once again.

You can load six bullets square into his chest, or stab a knife hilt-deep under the rib cage, and the killer will just keep rolling.

Well I mention that because the utterly ludicrous notion of Carbon Capture and Storage (CCS), as a solution to CO2 emissions from coal fired power stations has raised its idiot head once more.

The CCS process involves capturing the CO2 emitted from the burner chamber, compressing it, and sequestering it underground.

Resources Minister Matt Canavan recently handed out $23.7 million to various bodies around the country to (once more) discover CCS can never work.

So I can tell you right here, right now, CCS is not feasible in any way — financially, ecologically or in an engineering sense.

However since Canavan has done this thing, once more we are all forced to go through the mill of showing why CCS is an utterly fallacious idea.

The Massachusetts Institute of Technology (MIT) has an excellent reference page for CCS, so I’ve distilled the Power Plants CCS Projects page down for you here: 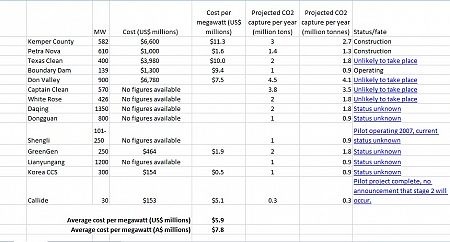 As you can see using the figures we do have, the average cost for adding CCS is A$7.8 million per megawatt.

Currently for the Australia has 26,790 MW of installed coal generation capacity. 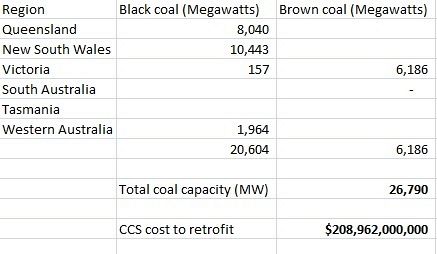 Source: https://www.aer.gov.au/wholesale-markets/wholesale-statistics/registered-capacity-in-regions-by-fuel-source, http://www.finance.wa.gov.au/cms/Public_Utilities_Office/Energy_in_Western_Australia/Electricity/Generation.aspx and Author’s calculations. The Northern Territory sources the bulk of its energy from gas and diesel, if you were wondering why it isn’t mentioned here.

So to retrofit CCS to these coal-fired power stations would cost A$209 billion.

However SaskPower, the operators of the world’s only “working” CCS project, Boundary Dam in Saskatchewan, Canada, in a burst of truly heroic optimism have claimed that next time they put a CCS unit on a generator the costs will be 20-30% cheaper. The optimism part is they seem to have the deluded notion that they will be given a next time, vanishingly unlikely given the debacle that CCS at Boundary Dam has been so far.

So even at that cheaper rate, CCS would cost an average of A$5.5 million per megawatt to install, giving a new total install cost of A$147 billion.

The other major CCS project of note, Kemper County in Mississippi in the U.S., has likewise been a debacle.

Originally projected to cost US$2.2 billion, it has already blown out to US$6.6 billion – $US11.3 million per megawatt – and as of writing date, has not even begun to capture a molecule of CO2.

Furthermore, even if everything went swimmingly for CCS, it still only captures a percentage of the CO2 emissions — 90% for claimed for Boundary Dam, 65% claimed for Kemper.

Recent figures for the installation of large scale solar in Australia give an amount of A$2.2 million per megawatt, so clearly it makes far more sense to spend $2.2 million a megawatt for 100% reduction, than (at best) $5.5 million and only have a portion of CO2 reduced. 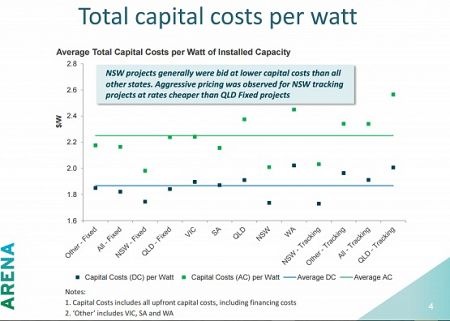 But even then things are rocketing onward for solar with three projects already reporting install costs below $2 million.

Additionally, it is reported that SaskPower has to spend C$60 (A$60) per megawatt hour to actually capture the CO2 as an ongoing cost.

Since the long run cost of coal generated power in Australia is $85-100/MWh, this would take the cost of CCS-fitted coal fired power up to $145-160/MWh.

Wind is down in the $80 zone as well, recent bids at the ACT seeing figures of A$77-$90, with Hornsdale Wind Farm now having a long term contract price over 20 years of $57/MWh. 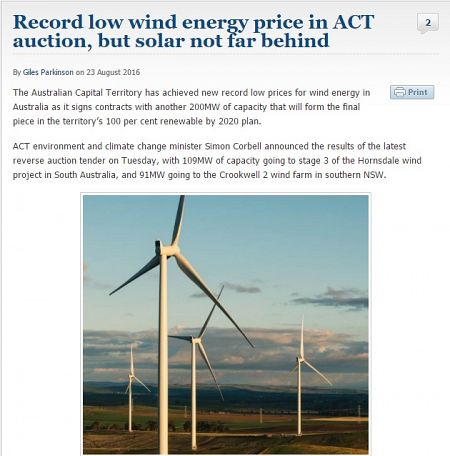 Thus clearly any government with half a brain can see the obvious better option is to shift any money from CCS to solar and wind, cheaper to install, soon to be cheaper per megawatt hour and you get 100% emissions reduction to boot.

So CCS was, is, and always will be a pipe dream of a “solution” to CO2 emissions, so that begs the question what is the federal government up to giving yet another handout to the ultimate dole bludgers of Australia, the coal industry?

I had an idea, but conferred with Tim Buckley, director of Energy Finance Studies, Australasia, of the Institute of Energy Economics and Financial Analysis (IEEFA) to get an expert opinion.

"why are the federal government and the coal industry still pushing this ludicrous notion that carbon capture and storage can work to reduce emissions?’

“The government keeps doling out research money to coal so they can placate the public into thinking the coal industry believes in and are working on the emissions issue and so we can keep burning coal and promoting the building of new coal stations in Asia because we have the solution (nearly) at hand.”

Many mouthpieces, like World Coal, the Minerals Council of Australia, the Queensland Resources Council and the Global Carbon Capture and Storage Institute, keep pushing the CCS fantasy. But as Tim Buckley points out, they do this to deflect anger of a world public screaming for action on climate change, not in any hope it will provide a real solution.

CCS cannot reduce emissions to the levels the planet requires; only renewable energy can do that.

So at the end of the day, this utterly ridiculous notion of CCS being any sort of fix for CO2 emissions reminds me of one of the many famous quotes from the Hitchhikers Guide to the Galaxy.

Far out in the uncharted backwaters of the unfashionable end of the western spiral arm of the Galaxy lies a small unregarded yellow sun.

Orbiting this at a distance of roughly ninety-two million miles is an utterly insignificant little blue green planet whose ape-descended life forms are so amazingly primitive that they still think digital watches are a pretty neat idea.

So we can paraphrase that to: the Australian federal government and the coal industry are so duplicitous that they think they can fool the public into thinking that carbon capture and storage can actually work.

Don't trust the COAL-ition with action on global warming. Subscribe to IA for just $5.