Leaders will feel the heat in Paris

With global temperatures soaring, the pressure for a successful outcome in Paris will be huge, reports Peter Boyer.

IT'S HAPPENING. Heat energy stored by the global ocean is now being released to the air around us, and the big burst of global warming anticipated for years by climate scientists is upon us.

For 15 years the world’s ocean has been taking up greenhouse energy from the atmosphere and storing it in its depths. Now some of that heat is escaping, courtesy of a big El Niño event in the equatorial Pacific.

But by mid-2015, warm waters of the eastern tropical Pacific had finally begun to push westward – the mark of a developing El Niño.

Since 1998, there’s been a succession of moderate and short-lived El Niños, but this year’s looks as if it may rival the 1997-98 event, the most powerful on record.

There was no El Niño in 2014, but even so the mean global surface temperature in that year was the warmest ever recorded. Scientists then said it looked as if it could be the start of something bigger again. They also reminded us that nothing is certain in global climate.

Last week, Japanese and U.S. government agencies released data for the year to the end of October, with the message that 2015 is more than 95 per cent certain to be the warmest year ever recorded.

October was a killer month. Its global mean, NASA says, was 1.04C above the October average since records began in the 19th century — the biggest-ever departure from monthly averages and the first time NASA has recorded a monthly anomaly exceeding 1C.

This October was the warmest ever recorded—by a lot. https://t.co/06SIIt4CYh #ActOnClimate

There are a couple of startling images in information released last week by America’s National Oceanographic and Atmospheric Administration.

One is a current sea surface temperature map. Most colours vary from patches of pale blue, showing cooling waters, to bigger areas of pink-shaded places (warming waters). But the eye is drawn to the eastern and northern Pacific, where large splashes of deep red depict extreme warming.

The other is a graph comparing month-by-month temperatures through the warmest years on record, with the six warmest years all clustered within a range of 0.2C. But the progression for January to October this year is way out on its own, clear of the next highest by an exceptional margin. 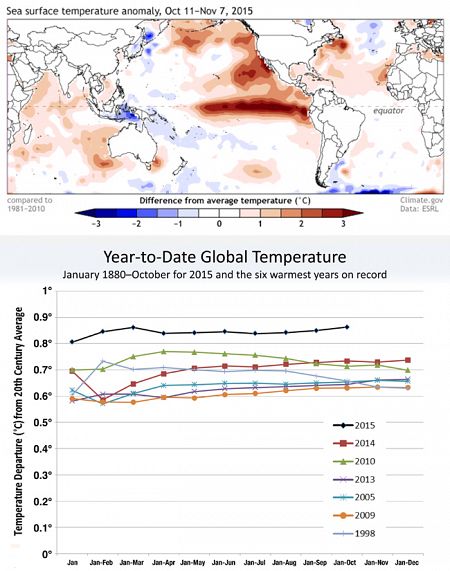 It’s impossible to view these images without a sense of foreboding, especially in Australia at this time of year when the twin scourges of drought and fire are always in the back of our minds.

Australia has just had its warmest October on record, and searing heat across the continent last week suggests November may be not far behind. Heat and drought have brought a high risk of wildfire to all southern states and left us with depressingly low hydro storages.

The current El Niño is expected to start decaying over summer, but underlying warming is expected to continue thanks to a positive, or warming, phase in long-term Pacific surface temperature cycles.

We know that if we don’t radically reduce greenhouse gas emissions the task gets tougher as each year passes. Yet the Global Carbon Project calculates that recent emissions have been higher than ever, around 10 billion tonnes of carbon a year and rising.

It gets worse. A veteran UK carbon scientist calculates that keeping a temperature rise below 2C would leave us with half the fossil fuel that we thought we’d have available to burn up to 2100.

In a paper published last week in Nature Geoscience, Kevin Anderson of the Tyndall Centre for Climate Change Research notes that the scenarios on which current targets are based are implausible or impossible, and assume we’ve already passed peak emissions when we haven’t.

What should we be saying to the world leaders soon to gather in the beleaguered city of Paris to chart a way out of these dire straits?

Shorten/Labor aim for net zero emissions by 2050. Turnbull off to Paris with goals set by climate change deniers... https://t.co/bP6qnsHNVC

If they want history to remember them well, they will need courage and a long view. Decisions of any value will inevitably bring prolonged economic disruption. Though some people will find the challenge exhilarating, there will also be anger and distress.

This is a task for a lifetime and beyond, a long, hard slog for governments, business and the rest of us. But leaders should be aware that an informed public, knowing the awful consequences of failure, will support decisive action.

For people who won’t be in Paris but feel they have a stake in the outcome (and who doesn’t?), rallies starting today will fill public spaces in cities around the world, including all Australian capitals and many regional centres. See details below.

This article was originally published on 24 November 2015 in SouthWind and is reproduced with Peter Boyer's permission.

The People's Climate March will take place between 27-29 November in Australia. Come along and help make this global march the biggest the world has ever seen. Details for each capital city here.

61 prominent Australians have signed an open letter calling on world leaders to discuss a ban on new #coal mines https://t.co/ULAx7v79Vq

Failure of Paris climate summit would be 'catastrophic', says Pope Francis ahead of #COP21 https://t.co/ej0ph9gwxi pic.twitter.com/hVR43hpyOs

Want to get the facts on climate change? Subscribe to IA for just $5.