Despite the angry bluster from Abbott, Hockey and the mining industry, the ANU’s decision to divest from fossil fuels is not only ethical, but make makes sound economic sense. Lachlan Barker reports.

The decision by the Australian National University (ANU) to divest $16 million of its billion dollar plus portfolio out of fossil fuels has attracted volleys of abuse from the Federal Government, the mining industry and the conservative press.

Prime Minister Tony Abbott called the decision “stupid”, Treasurer Joe Hockey accused the university of being “removed from the reality” of what drives the economy and creates jobs.

Sandfire Resources, one of the companies whose stocks the ANU divested, threatened legal action.

It’s been a hell of a storm for the ANU and things aren’t over yet.

‘Our consultants stand by their assessments, which we have found persuasive, but should new information come to hand, or flaws become evident in the methodology involved, we would naturally reconsider the assessments.’

But as you will see below, the players who provided the advice to the ANU have no doubts.

And unfortunately for carbon fans, it has put divestment on the front page, with other universities now coming under the spotlight to see if they too will divest.

So I contacted a number of major universities to check their positions on divestment; here are the results so far:

The Melbourne University response was perhaps the most interesting.

The University’s media department replied to my email saying:

‘The University does not currently hold direct shares or directly invest in fossil fuel companies.’

‘It should be noted that ESCG requirements by the University have been in place for some time and predate the current divestment movements.’

So turns out Melbourne Uni were a leader in this area, which ‒ considering the abuse the ANU has copped recently ‒ led me to search for any government reaction to this. I found none.

However, staff at Melbourne University seem to question that ‘no fossil fuel stocks’ statement from the uni and are currently preparing a letter to the uni, asking for any fossil fuel holdings to be dumped.

Staff at the University of Queensland are said to be preparing a similar missive.

In short, the divestment debate is running hot.

Melbourne Uni may have been first in Australia, but there is no doubt that the ANU is the ones copping the most current heat. Of course, there is another player who has also really been feeling the blowtorch — CAER (Corporate Analysis, Enhanced Responsibility), which provided advice to the ANU concerning their share portfolio.

The chain of events is as follows.

On 31 July, CAER made the following announcement:

‘CAER is excited to announce a new agreement with The Australian National University (ANU) .... CAER will be providing the IO with ESG ratings and reports on companies within their portfolio.’

[Note: IO refers to the ANU’s Investment Office and ESG stands for Environmental, Social and Governance.]

The ANU then made their decision to make a tiny divestment — less than two per cent of its portfolio. At that, the floodgates of abuse were opened.

Among the vehement outpourings was a story in the Australian Financial Review, headlined ‘Consultant to Rewrite 'Flawed' ANU Report’, by Ben Potter. 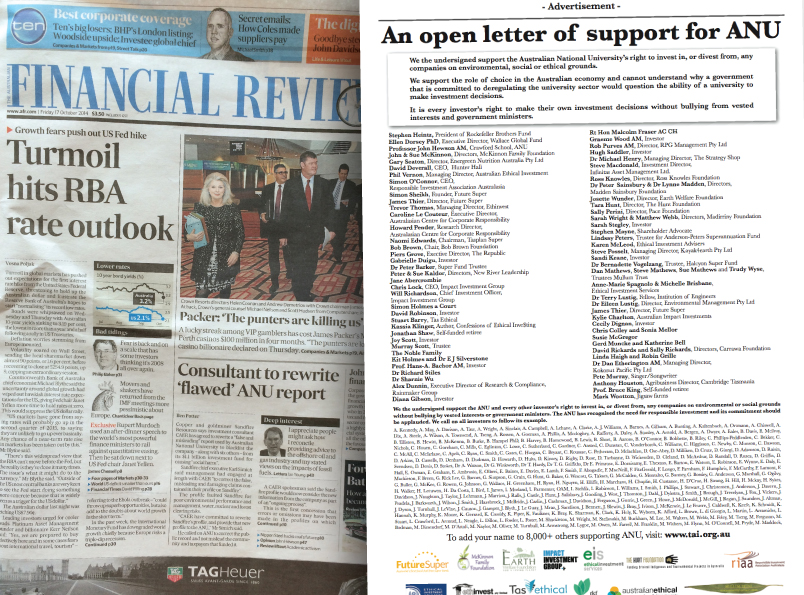 Well CAER wasn’t having that, and they released a statement in response:

CAER categorically stands by the research it supplied to the Australian National University.

The AFR article is factually incorrect and Mr Potter was aware of this prior to publication, but has chosen to publish anyway. CAER will be seeking a retraction from the AFR.

I contacted the AFR and asked if they will be printing a retraction, but have had no response.

EIRIS is a worldwide research organisation and their home page announces:

‘EIRIS is a global leader in the provision of environmental, social, governance (ESG) research for responsible investors.’

EIRIS stated their support for the process, saying:

The current controversy regarding the Australian National University’s (ANU) decision to divest from seven stocks in their investment portfolio has involved some serious misrepresentation of the role of their research provider, CAER.

EIRIS, as a global leader in the provision of environmental, social and governance (ESG) research, stands by CAER, EIRIS’s Australian research partner, and the methodology it has used to provide research to the ANU.

So CAER and EIRIS are in no doubts about their methodology and are confident vice-chancellor Ian Young will not have to reverse the divestment decision.

But apart from the ethical sense of fossil fuel divestment, if you’re an investor simply looking to make money, you would be well advised not to listen to Tony Abbott.

The Prime Minister, apart from calling it [the ANU divestment] a ‘stupid’ decision, added:

“Any entity which says that they’re simply not going to invest in energy companies is frankly ­depriving its members of the benefit of some very good investments, because Australia ought to be one of the world’s energy superpowers.”

The Australian Stock Exchange (ASX) provides six-monthly charts of stock activity and here is the recent history of those companies’ stock prices — from six-monthly peak until today:

So, the market begs to differ, as it looks like the investors are, at least at the moment, moving out of fossil fuels and mining in general.

Further support for the ANU’s decision to get out of fossil fuels would appear to be the languishing price of thermal coal.

From a recent peak of US$140 in December 2010, the price of this energy generation source has since dropped steadily such that, in July this year, Australia began officially mining thermal coal at a loss. 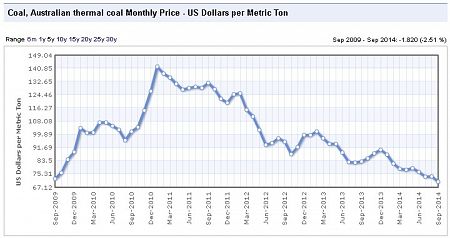 Finally, Commsec have released their State of the States economic report for 2014, in which it shows NSW have moved to the top spot in Australia, largely due to the housing market, displacing mining oriented Western Australia.

This is the first time since 2011 that WA has not been on top, and Commsec said this:

‘Western Australia has lost ground on retail trade, equipment investment and population growth – a consequence of the fading mining boom.’

The ANU decision to divest was taken on ethical grounds, but it appears as if economics is on the ANU’s side as well.

If you wish to contribute to the ANU debate, a support petition for divestment can be found here.

If you’re against divestment, I can’t help you; I did look, but there is no easy-to-be-found petition demanding reinvestment in fossil fuels. 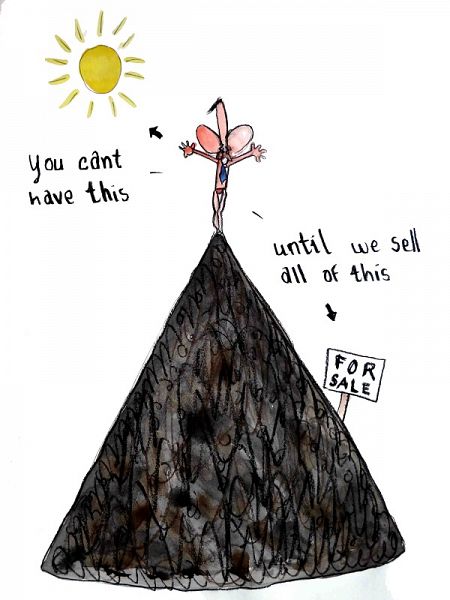