Anyone who has their economic wits about them and cares about the environment, can see that the Shenhua coal mine is a dog of a project — but will Greg Hunt? Lachlan Barker reports.

THE CONTROVERSIAL Shenhua coal mine slated to be sited on the Liverpool Plains prime farmland on in north western NSW is approaching its final approval, with federal environment minister Greg Hunt to give his decision in early July.

The mine, as planned, is appallingly destructive, with Indigenous archaeology, koalas (also here), the water table and of course farmland to be adversely impacted, that is, destroyed.

If there is any justification for this destruction, it would be money and lots of it. However, the finances of the Shenhua project show the reverse. Far from making money, Shenhua will lose money hand over fist.

So here is the economic justification from the Shenhua Environmental impact Statement (EIS) on the Major Projects website of the NSW Planning and Environment Department. 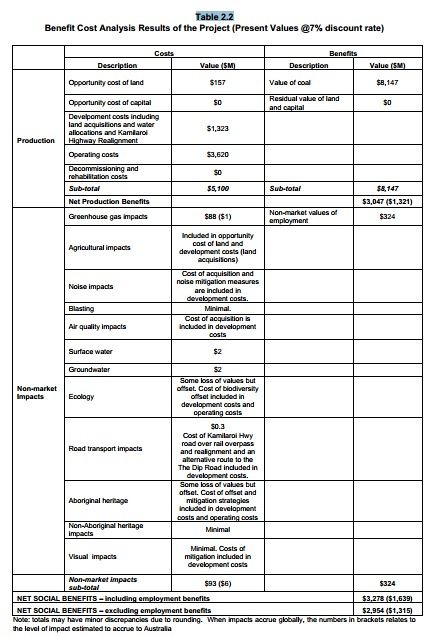 The most important figure on that table is "value of coal", which is projected to be $8.147 billion.

However, this is predicated upon a price projection done back in the heady days of higher coal prices. The projections are: ‘A$142 a tonne for coking coal and A$99 a tonne for thermal coal’.

Coking coal is used in steel making and thermal is burned in power stations for energy generation. The coking coal from Shenhua is a lower quality version known as semi-soft coking coal, which sells for less.

However a submission on Shenhua from The Australia Institute (TAI), commissioned by the Caroona Coal Action Group produced more realistic predictions. 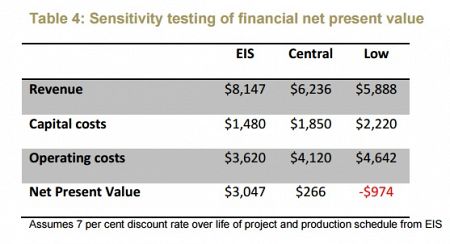 Now Shenhua and lovers of fossil fuels will say, “yes, but the price of coal may pick up over the years”.

A coal price rebound however, is unlikely, very unlikely.

Coal is in structural, rather than cyclical decline, you can read of that here (IEEFA), here (RenewEconomy), and here (Murdoch press).

China is reducing their reliance on the fuel, U.S. coal companies are going to the wall.

Alternative customers for Australian coal, Korea and India were the big hopes, are making their own arrangements, all to reduce their reliance on imported coal.

No, the coal price is not coming back.

Shenhua claim that $1.3 billion will flow to Australia.

Shenhua claim this $1.3 billion in benefits, of which royalties will be, $565 million and company tax $745 million.

This is countered by The Australia Institute with an estimate of $541 million in total, $483 million in royalties and $45 million in company tax.

The problem even then though is that the overall figures are based on a 30 year life span for the project. But clearly, if the project is losing money it’s not going to last 30 years. If Shenhua give it up after five years, as an example, then their contribution to Australia is going to be $18 million a year, of a five year total of $90 million, or five per cent of their original rosy forecast.

So it’s clearly a dog of a project, and the frustration here is that anyone with the slightest economic nouse can see that this mine is a financial disaster, yet Hunt is more than likely to approve it, given Tony Abbott's love of coal.

If Shenhua is approved, then 29 Indigenous archeological sites will have been destroyed forever. This is blandly referred to on the project website as ‘directly impacted’, AKA, destroyed utterly forever.

As a result, local Indigenous group, the Gomeroi people, understandably don’t want this mine destroying their ancient lands.

The Gunnedah district is home to the largest inland population of koalas in NSW and is a major tourist attraction. Some 847 ha of their habitat will be destroyed by the mine, decimating the koala population (see IA's story: 'Koalas for coal: Will it come to this in NSW?'). 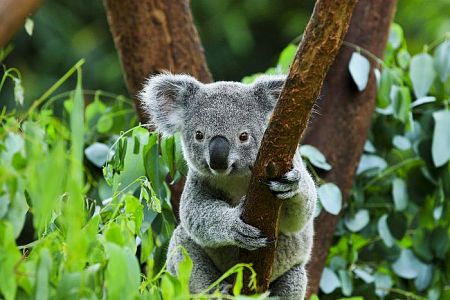 Which is our most precious asset? Koalas, our national icon, or "past-its-use-by-date-coal"?

Local farms will be adversely affected by the mine. The negative effects of the mine primarily revolve around water. If the mine begins slashing enormous holes in the earth, then the water table will be destroyed, and surrounding farms will, at best, be forced into less productive Dryland, rather than irrigated, cropping.

As a land owner reported in The Australia Institute’s submission said:

‘People need to understand that the impacts of this [Shenhua] project is not just a matter of doing a bit less irrigation and a bit more Dryland farming.

Our whole business model, our allocation of land, labour, capital, debt and equity, is all based around our long-term sustainable access to water of high quality.

While some assets could be sold, many can’t be moved and would become stranded assets.

Any threat to our water resources threatens our ability to pay investors and creditors and affects the long-term viability of our business and those of everyone on the Liverpool Plains.’

While NSW Deputy Premier Troy Grant (LNP) and local member for Tamworth, Kevin Anderson (LNP) have claimed they are going to ensure a “double, triple and quadruple check” of the water modeling for the mine, this is a travesty of community consultation and no one is reassured by this. 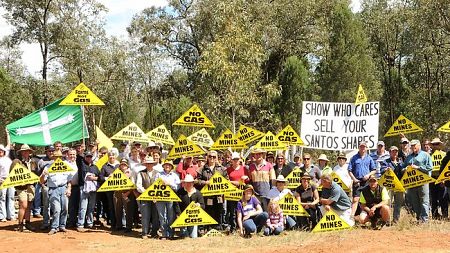 No one involved with agriculture on the Liverpool Plains wants this mine to go ahead.

It’s a zero sum here. If the mine goes in, the water table is destroyed, and the Liverpool Plains as we know them will be gone forever.

One can only hope that Minister Hunt lives up to his responsibility as minister FOR the environment and says "NO" to this mine.

Lachlan blogs at cyclonecharlie88.blogspot.com.au and you can follow him on Twitter@CycloneCharlie8.

The coal price has crashed by 60% since 2011.As the price sinks disinvestment in coal is on the rise! http://t.co/3sAyUU6CeY

For the latest news on how governments of all stripes are destroying our environment, subscribe to IA for just $5.