Dumping on the Reef: The Abbot Point disaster (Part One)

In the first of a three part series, Lachlan Barker looks at how it is possible the Federal Government has agreed to allow millions of tonnes of sludge and slurry to be dumped on one of the world's most spectacular natural wonders — the Great Barrier Reef.

THE MINISTER for Making a Lot of Money Out of Coal, Greg Hunt, has decreed that it is perfectly reasonable to dump three million tonnes of dredge spoil in the Great Barrier Reef Marine Park.

What lead to this raging piece of lunatic eco-bastardry?

Well here is a tale of woe that could have been inserted into a Yes, Minister or The Hollowmen script without changing a word.

First, a bit of history.

In 1983, the Hawke Government was elected, largely (arguably) due to its promise to save the Franklin River in Tasmania from being dammed.

They kept their promise and the Franklin continued to run free.

However, while the focus of the nation was on Tasmania – surely a first and only in Australia's perennial mainland-centric view – the Queensland Government was quietly getting away with things in the Deep North.

One of these things was the controversial Daintree Road, officially known as the Bloomfield Track.

Environmentalists opposed the road, as they conjectured it would open up this area of massive environmental significance to development.

Needless to say, the Queensland Government of Joh Bjelke-Petersen and the Port Douglas Council were all for it.

The spotlight shone on the issue and eventually led to the area being declared a World Heritage area, though Joh and the PD council went as far as the High Court to try to stop this listing.

However, good as this listing was, it was kind of the wrong way round, as the road was there now, and development began its creeping pace into the now Heritage-listed Daintree.

I might add, the Hawke Government – then elected and comfortably on their way to a cushy life with index-linked pensions – were starkly silent on the Daintree issue.

The other piece of environmental nastiness that Joh and his cohorts were able to put in place was the building of a coal loading port at Abbot Point, near Bowen in North Queensland in 1984.

It had to be Abbot Point, as this was one of the few places in Queensland where deep water ran so close to shore, thus allowing access for deep-draughted coal ships.

However, Joh had a problem — the area around Abbot Point was in the Great Barrier Reef Marine Park.

The Park has been established by the Whitlam Government in 1975 to create greater control  of the park.

Gough did this mainly to stop Joh's, impossible-to-describe-the-lunacy-of, plan to drill for oil on the Reef.

Initially stymied by those busybodies in Canberra, Joh then got himself some good lawyers and hatched a plot that was to have ramifications that none of us really understood back then.

He simply cut off a little chunk of the Marine Park at Abbot Point and, with the area now removed from Federal control and without World Heritage listing, he was free to build the coal port. 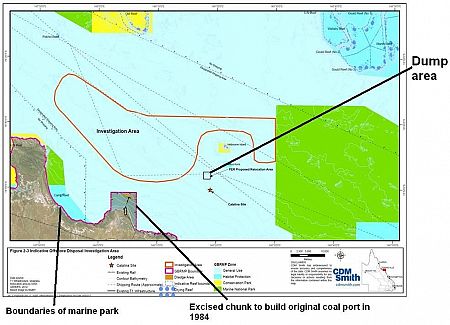 Ecologically of course, a line on a map doesn't change the damage done by industrial port activities.

However, legally – since the area was now "out" of the Park – it was open slather, with environmental regulations gone and forgotten.

And so we come forward in time to today.

Various players in the field – GVK Hancock (joint venture between an Indian conglomerate and Gina Rinehart) and Adani (an Indian Coal giant) being two – wish to open up the nearby Galilee Basin to export even more coal.

To do this, it was decided that the coal loader port at Abbot Point would have to be expanded — and here democracy and the rule of environmental law went out the window and show little sign of returning.

The expansion – originally for six new wharves, but now only for two, with the withdrawal of major players Rio Tinto and financial contributor, Lend Lease – calls for the dumping three million cubic metres of dredge spoil.

And the easiest, cheapest place to dump it is just offshore — inside the Great Barrier Reef Marine Park.

And here we move into Yes, Minister territory, writ large.

In my initial rage, I thought that the Minister for Destroying the Environment, Greg Hunt, had simply threatened the Marine Park Authority with withdrawal of funding if they didn't fall into line.

Turns out, it was done in a much more silky smooth fashion, of which Sir Humphrey Appleby would have been proud.

Seeking some facts – Miranda Devine and Andrew Bolt, please note – I rang the Great Barrier Reef Marine Park Authority (pronounced grab-oom-pa) and was put through to their "media unit".

I asked this question:

"Did Environment Minister Greg Hunt ever threaten to withdraw funding if GBRMPA turned down the proposal to dump spoil in the Marine park?"

The media person then directed me to a statement on their website answering any queries in this area.

And the piece of ministerial doublespeak I found there could have been written by Bernard Woolley — Yes, Minister's favourite drafter of let's-confuse-the-minister-gobbledegook.

'All of the documents released under this FOI are preliminary working drafts which were never submitted to the delegate, the senior manager responsible for GBRMPA’s decision, for consideration. As such they do not represent the views of the agency.'

So I rang them back.

"Could you tell me what 'the agency' in this instance refers to?"

"The agency means the staff of GBRMPA; the 'Authority' strictly speaking only means the board members."

OK, so that's that — but then the rest of the paragraph could do with some work.

If these documents were never submitted to the 'delegate' for consideration, and do not represent the views of the 'agency', then why the naffing hell are they on the goddamned website in the first place?

And why on Earth are journalists directed to read it to get answers to their questions?

I'm still chasing an answer to this; I'll get back to you if I can machete my way through this thicket of gibberish.

So then we move onto the second paragraph, which contains three sentences, of which the first is:

'GBRMPA is an independent regulatory agency which is required to make an independent decision under the Great Barrier Reef Marine Park Act 1975 and the Environment Protection (Sea Dumping) Act 1981.'

GBRMPA will make the decision to dump or not.

For the second sentence reads:

This seemed to me to be saying that the minister and his henchfolk in Canberra took the decision first, before consulting with the GBRMPA scientists.

So I emailed GBRMPA again seeking clarification, I printed the offending paragraph:

"This paragraph seems to be saying to me that the minister made his decision first, and the Agency's approval followed. Is that correct?"

"Hi Lachlan. Yes, that is correct."

Then the last sentence of this paragraph reads:

'Absolutely no political pressure was brought to bear on GBRMPA.' 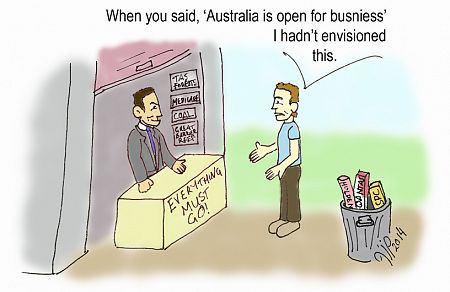 I'll tell you this for nothing, if I was a civil servant in any department and I heard that the Minister had already made his decision, I know for sure and for certain what decision I would be making.

I would be agreeing with everything he had said and done to keep my job.

So there we have it, for the first part of these articles on Abbot Point.

The Minister for Destroying the Environment, Greg Hunt, made the decision without reference to anything within a day's sail of being scientific.

Then he ensured his wishes got through in osmotic fashion to GBRMPA and they, to keep their funding and their jobs, affirmed this appalling catastrophe of a decision.

In the next article, we'll go into the financial unviability of the Galilee basin coal mines and hear from a voice of sanity — Greens Senator Larissa Waters.

Final note: before Senator Ian Macdonald and the rest of the "no-brain" brigade start accusing IA of being biased, I have twice sent emailed questions to Greg Hunt, giving him a chance to explain his side and had no reply.

Read more by Lachlan Barker on his blog cyclonecharlie88.blogspot.com.au. 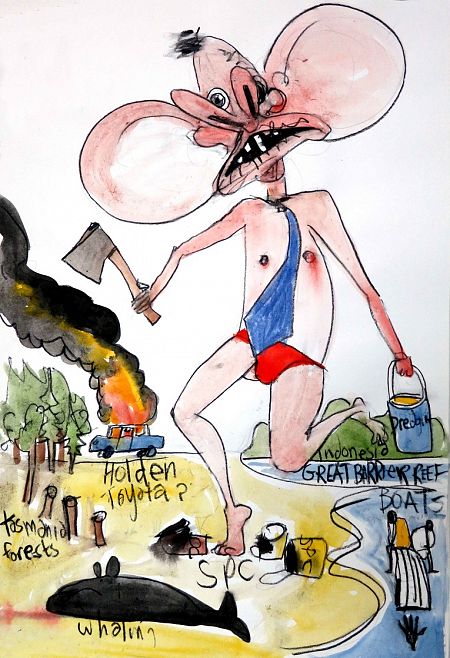