On Tuesday, Sofitel Brisbane – a part of the French-owned Accor hotel chain – threw out into the streets two mothers and three young children, amongst others, because they were involved in a peaceful protest about coal seam gas (CSG). Miriam Bauman reports.

Heavy-handed Sofitel throw children out into the streets to support CSG
Two mothers, Judi Emmett and Tracey Fuller, three young children aged 11, 8 and 6, and three adult friends were evicted from rooms at the Sofitel Brisbane on Tuesday, apparently because they had been involved in a peaceful protest against coal seam gas mining outside the hotel. 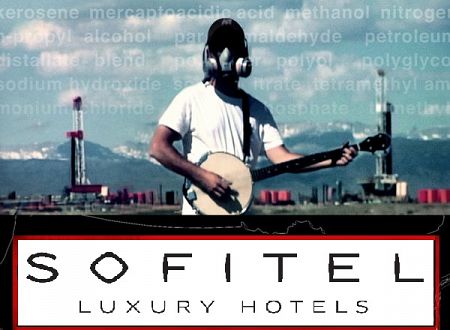 Sofitel was hosting the two-day 9th Annual Coal Seam Gas conference. More than 100 concerned citizens had rallied outside the Sofitel to protest against the extraction of coal seam gas and its long term effect on the water and food security of the nation.

When Sofitel Brisbane discovered some of the protesters were staying in the hotel, they immediately evicted them from their rooms.

Eyewitnesses confirmed that at no time did the guests openly display any literature, banners or clothing while inside the hotel, except when they were being evicted. Sofitel refused to let the reporter speak to the duty manager today and as yet had not replied to emailed questions about this eviction. In the interest of balance, the editor also made repeated requests to Sofitel for their side of the story, but so far these have also been ignored.

Tracey and the three children were approached by the rooms manager and the duty manager, Amery Burleigh, then questioned about their involvement in the protest. Later all members of the group were asked to pack up and were watched by security, police and managers until they left the building.

“I was upset, three little girls were crying and we were tossed out onto the pavement without a refund,” Tracey said. Their friend Chris Williams, however, who was also evicted, wasn’t charged for his second night.

As the evictees left the Sofitel, one of the little girls was heard to say, “What have we done wrong?”

This group of friends all live at Keerrong, near Lismore, on what is classified as a ‘sensitive flood plan’ by the NSW Government’s Draft Environmental Plan. Judi Emmett has an eight acre lifestyle block in the area, while Tracey Fuller runs cattle on her 62 acres. Ian and Vicki Gaillard have been breeding horses for 30 years on their land; because of the DEP’s classification, if they stop breeding horses for more than a year then they cannot resume that activity again.


When Arrow Energy put down a test bore on one of its exploratory leases a year ago – about three kilometres from the Gaillard’s and a kilometre from Judi’s house – they were all somewhat surprised, since there had been no public community consultation and, according to the Government, the area was a ‘sensitive flood plain’.

“The more we learned about coal seam gas mining and what is does to the water the more horrified we became and started the Keerrong Gas Squad to raise awareness,” said Judi.

At present, more than 70 per cent of Queensland and New South Wales is covered by mining leases. The Courier Mail reported on May 23, 2011 that Arrow Energy had a coal seam gas well blowout near Dalby that spewed methane and water up to 90 metres into the air for more than a day. Property owner Tom O'Connor said it was the fourth such incident in recent years on his property. The company could be fined up to $50,000 after taking two hours before they notified authorities of the incident.

Ian Gaillard is adamant that coal seam gas mining has the potential to damage the integrity of the Great Artesian Basin:

“A bunch of industrial mercenaries are holding the country’s water to ransom and are not paying a brass razoo for it. The risk to Australia’s underground water and the integrity of the health of the nation is too great to leave in the hands of these industrial mercenaries. Generations to come will see them as criminals.”

Vicki Gaillard says her major concern is what coal seam gas mining would do the water quality.

“My major concern is the quality of the water I will put on my veggie garden and bathe my grandchildren in,” Vicki said.

The dangers of CSG

Distinguished water scientist and chief executive of Canberra’s eWater Cooperative Research Centre (CRC), Professor Gary Jones, is interested in how the mining and energy sector uses and impacts on water resources in Australia.

“Firstly, water is used in many (not all) CSG drilling to enable ‘fraccing’ (or ‘fracking’). This is the process by which water, sand (or similar) and various chemicals are pumped (via a well) into a coal seam, causing it to fracture. The fissures and cracks thus created allow space for the ‘adsorbed’ coal gas (mostly methane) to diffuse into. Secondly, groundwater that naturally overlays a coal seam may need to be pumped out to ‘depressurise’ the coal formation so the gas will flow back to the surface.” 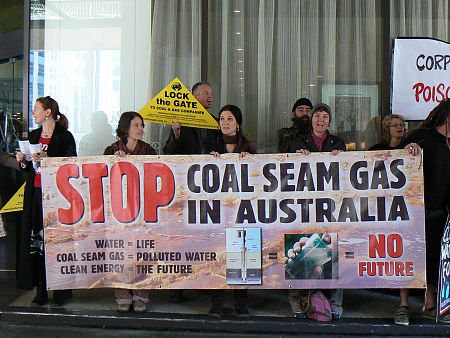 According to Dr Jones a number of concerns about water use, environmental and public health have been raised: