Despite Turnbull's weak NEG, investment in renewables surges ahead

Despite the Coalition's best efforts to pour cold water on Australia’s transition to a low-carbon power network, things are really hotting up in the clean energy sector.

Latest data from Bloomberg New Energy Finance (BNEF) reveals a “record-smashing” year for investment in solar and wind in Australia in 2017, totalling AU$11.2 billion (US$9 billion) and propelling the nation to seventh position on the world leader board.

Driving this tidal wave of investment in the Australian market – a 150% improvement on 2016, according to BNEF – has been the industry scramble to meet the Federal Government’s Large-scale Renewable Energy Target (RET), as well as the groundswell of consumers seeking solutions to rising power prices. 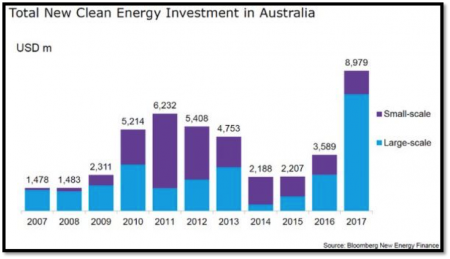 “2017 was a breakout year for the Australian clean energy sector. Total investment in clean energy in Australia rose to a record AU$11.31 billion (US$9 billion), smashing the previous record of AU$7.79 billion (US$6.2 billion) set in 2011.”

But just as the race to meet the RET – 33,000 gigawatt-hours of additional renewable energy generation by 2020 – has helped drive the current boom in clean energy investment, its fulfilment could see investment go off a cliff, with nothing but the Turnbull Government’s proposed National Energy Guarantee (NEG) to cushion the fall.

“2017 will likely mark a peak — investment will begin to taper over the coming years unless there is a significant change in government policy.”

The issue, explains BNEF’s head of Australia, Kobad Bhavnagri, in an interview with RenewEconomy,

For the power sector alone, that is a very weak target. … By our calculation, the NEG would require only about 1.5GW of large-scale renewable energy to be constructed over the coming ten years to achieve the 26-28% target.

So what’s required is a more ambitious emissions reduction target under the NEG, or for state governments to continue to develop policy to ramp up investment.

In particular, he added, the focus would be on Queensland and Victoria — two states that have “already been a sort of lifeline to the industry”. Other states, namely NSW, would have to lift their game.

But it might not have to come down to the states going it alone.

Latest renewables stats show the RET has already been met. But Turnbull's NEG will slam the brakes on Australia's booming renewable energy industry. Check out the Renewable Energy Index https://t.co/dL0oRELvDI

Bhavnagri has not written off the possibility that the Coalition will come to the party on more ambitious, longer-term emissions targets. This is not just to drive investment in renewables – not just because the growing policy chasm between Canberra and the States is starting to make Malcolm Turnbull look really bad – but because that is what Australia signed up for when it joined the Paris Climate Accord.

I think this is a key thing to watch in 2018, because every state and territory in the NEM has signed up to targets (more ambitious than the Federal Government’s).

States should be throwing their weight around the COAG table and only signing up to a NEG if it ups ambition on a pathway to net zero emissions by 2050.

“That’s the only viable option,” he says, if Australia is truly committed to the global climate goal of restricting warming to less than 2°C.

This article by Sophie Vorrath was originally published in RenewEconomy and has been republished with permission. You can follow Sophie on Twitter @sophvorrath.