Coal is NOT good for humanity — or Australia

Coal is not only not “good for humanity”, says Lachlan Barker, it is not even particularly good for the Australian economy — especially not in the long term.

THE RIDE IS OVER, TONY

WHEN TONY ABBOTT said “coal is good for humanity” at the opening of a coal mine in Moranbah on Monday, it was somewhat overshadowed by his comical,  bumbling threat to “shirtfront” Russian President Vladamir Putin at the G20.

Senator Larissa Waters from the Greens responded angrily to the Prime Minister’s remark, stating in a press release:

People will be shaking their heads in disbelief at the Prime Minister’s alarming comment today, and future generations will wonder how our Prime Minister could be so short sighted.

While our Prime Minister continues to ignore reality, Australians understand coal is threatening our very way of life and our planet, with global warming, sea level rise and acidification and more extreme weather events.

While our Prime Minister continues to ignore reality, Australians understand coal is threatening our very way of life and our planet, with global warming, sea level rise and acidification and more extreme weather events.

Coal is important in the short term, but only while we transition to renewable power. Currently operating coal mines can adequately meet this demand, opening new ones is financial and environmental lunacy.

.@TonyAbbottMHR: coal is good for humanity. RT this to tell him, "Heck no!" http://t.co/31Sulj4UnL #WhyWhyNot

Another part of this ongoing debate is that the federal and state governments keep talking as if they are in control of when and if the coal industry will end. Nothing could be further from the truth. The future of the Australian fossil fuel industry will be decided by global financial forces. And the signs are not good for coal.

A story in The Conversation by business academics Professor John Mathews and Hao Tan highlights China’s quest for renewables and paint a picture PM Abbott would do well to comprehend.

Mathews and Tan write that China’s

… latest target is that renewables will have a capacity of 550 gigawatts — over half a trillion watts — by the year 2017. We calculate that this will exert a major impact in China — enhancing energy security; reducing emissions pollution; and reducing carbon emissions .… If it can reach its 2017 target of 550 GW renewables, we calculate that this would translate into a saving of 45% on current imports of coal, oil and natural gas.

Added to this, the price of coal is dropping, largely due to oversupply. It will almost certainly drop more – or decrease volume – due to a recent Chinese decision to put an import tariff on Australia’s coal — 3% on coking, and 6% on thermal. In addition, new Chinese restrictions on ash and sulphur content will make some percentage of Australia’s coal unsaleable in China, or mean it will have to be ‘washed’ further, adding to production costs and thereby lowering profit.

As for gas, Australia is currently projected to ship 18 Mt of gas to China in 2018; the above reduction could see the proposed 18Mt drop to 14Mt or lower. 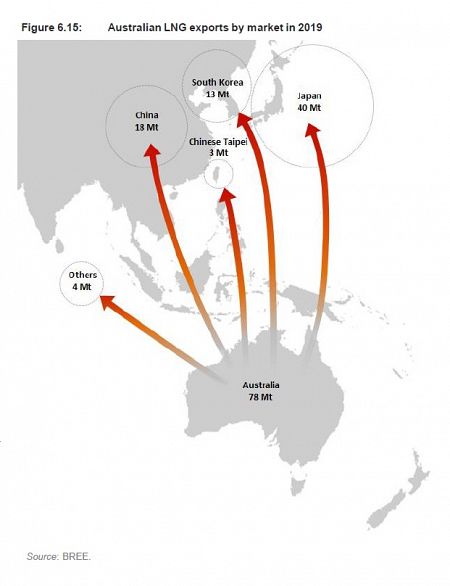 China also recently signed a gas deal with Russia to pipe in gas, adding to the threats to Australia’s gas exporting market.

On the small upside for the fossil fuel export industry, our biggest client for coal and gas is Japan. After Fukushima, Japan has become more wary of nuclear power and, as such, will rely, in the short term, on importing coal and gas from Australia — amongst others.

However, Japan has plans to go renewable as well. Currently the major stumbling block is that their power grid is not geared for the intermittent supply from renewables like solar, but they are working on it and, once these problems are solved, Japan plans to have 20% renewable power by 2020, with major consequences for exports to Australia’s biggest coal and gas customer.

So, again, all of this points to the lunacy of opening new coal and gas projects.

Then there’s divestment. This is the practice of removing your investment money from fossil fuels.

The most high-profile example of divestment is the Rockefeller Brothers Fund.

Old man J.D. Rockefeller became as rich as Creosus by finding oil and he stumbled upon a lot of it — becoming America’s first billionaire from these finds. Currently the Rockefeller Brothers Fund has divested 7% of its vast wealth from fossil fuels.

Fund president Stephen Heintz says they are making a moral and an economic case:

“The action we’re taking is symbolism, but it is important symbolism. We’re making a moral case, but also, increasingly, an economic case.”

The whole divestment idea began in the States at Stanford University. Since the world’s universities are meant to be the cradle of future leaders, this can only auger well for humanity.

Here in Australia, the ball has been set rolling by the Australian National University (ANU).

The ANU has divested $16 million out of fossil fuels from its $1 billion portfolio — which is only a small divestment, but has provoked a storm of anguish from the Federal Government and the coal industry. They won’t be happy to know that Sydney University are also considering making the same move.

Joe Hockey weighed in with a truly idiotic remark, highlighting his ignorance of the very economy he presides over, reportedly saying that the ANU was:

“… removed from the reality of what is helping to drive the Australian economy and create more employment.”

The following are some figures Joe would do well to note. Mining is not driving the Australian economy, services are.

This table from the NSW department of Trade and Industry tells the real story. 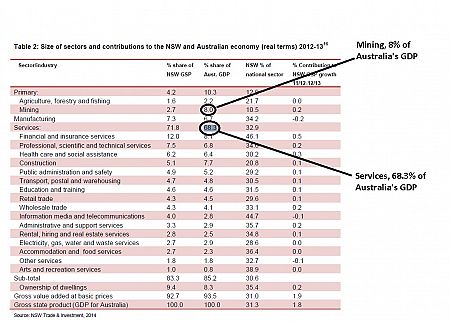 As for Queensland and Western Australia leading the economic way with their mining interests, the Australian Bureau of Statistics (ABS) says this is wrong as well, as it tells us:

Like he did when he claimed this week that it was “ridiculous” to suggest Australia was the highest per capita greenhouse gas emitter in the OECD, this embarrassing numbskull of a treasurer is dead wrong when he claims mining is Australia’s most important employer — it’s just not.

How can such imbeciles be in charge of this country? How can a treasurer and prime minister be so ill-informed and make such obviously false and reckless statements.

In the movie Point Break, FBI agent Keanu Reeves says to bank robber Patrick Swayze at the end of the film,

So to paraphrase, Joe and Tony, “the fossil fuel ride is over”, it’s time you recognised that.

Coal is good for humanity in exactly the same way bombing Iraq is a humanitarian mission.