The NSW Planning and Assessment Commission (PAC) has approved the controversial extension to the Mt Thorley Warkworth mine.

This is a blow to the residents of Bulga – the village that will be destroyed by this extension – however the mine’s Operator, Rio Tinto, would be well advised to hold off on celebrations for a while yet.

The residents have vowed to fight on using civil disobedience if necessary and they certainly have grounds to seek redress over this decision.

As it turns out, the supposedly independent PAC used – as usual – hopelessly optimistic financial analysis done, in this case, for Rio Tinto by resource company cheerleaders, BAEconomics.

This financial analysis is subjective to a certain degree, but since a simple two minute check of the coal price and exchange rate shows it’s wrong, one wonders– yet again – just how independent the PAC is.

Thankfully for the people of NSW the Australia Institute (TAI) has provided a more accurate financial analysis, which is shown here: 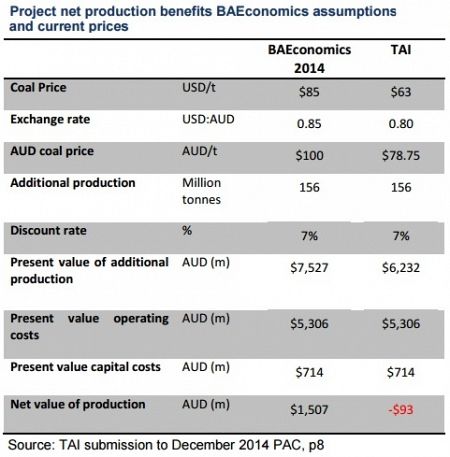 As can be seen, the optimistic BAEconomics is provided on the left and the TAI on the right.

This table refers to the net value of production.

However, BAEconomics have used a coal price of A$100, which is optimistic to say the least. At time of writing, the exchange rate is 0.72 and the coal price for October 2015 from IndexMundi is US$55.89.

Thus the price for coal is A$77, closely matching the TAI figures.

So, as can be seen, the Mt Thorley Warkworth Extension will end up A$93 million in the red.

However, even then things aren’t what they seem.

The -$93 million figure refers to the ultimate tally for coal production after 21 years of operation of the MTW Extension — the slated life of mine.

But the problem is that the mine extension is not profitable from day one, so it won’t last 20 years.

This is relevant because the other benefit to NSW is royalties.

Royalties come in at 8.2% of the pre-tax value of open cut mined coal.

BAEconomics estimate the value of royalties after twenty years at $617 million.

However, we can with certainty conjecture that if the mine is not making a profit Rio Tinto will not operate it for the full life of mine.

So if, as an example, the mine lasts five years before Rio – or whoever buys it from Rio – give it up, then NSW will get five years worth of royalties — a quarter of the figure listed by BAEconomics.

Then there is the jobs listed in the PAC final determination factsheet as 1,187.

Yet despite all the bleating about jobs from the state government and Rio Tinto, it is impossible to believe that they will keep operating an unprofitable mine just to keep all the employees in work.

Show me a mining company that gives one hoot about the welfare of the employees and I’ll in turn show you the unicorn that just manifested itself on my front lawn.

So what is really going on here?

Well, the speculation is that Rio Tinto wish to sell this mine. If they have the approval in place and better still a long term contract for the coal, the sale price will be higher.

And so, once again, we come to the farcical situation in Australia where a mine that clearly cannot make money has been approved.

The government of Mike Baird can claim that they made a decision based on the most accurate data available.

However that is clearly not the case, the most accurate data available to anyone with a web browser and a spreadsheet is that the coal price is at A$77 and going down. 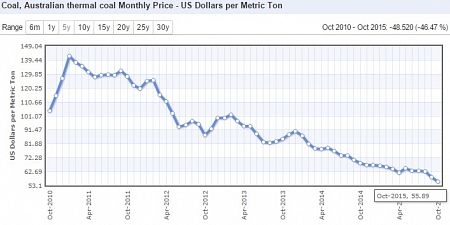 And while it is of no comfort to the residents of Bulga, I can conjecture this: not one tonne of coal will ever be dug out of the ground at the MTW extension.

Rio, now that they have their approval in place, will begin the process of trying to sell the MTW complex.

If another company is foolish enough to buy it, they will then sit on it and hope the coal price turns around.

I say that this is no comfort to the residents of Bulga as they have to live with the ongoing stress of an approved mine hanging over their heads.

So, in the end, the advice for the employees of Rio Tinto at Mt Thorley Warkworth is ... don’t celebrate yet.

The residents of Bulga haven’t given up this fight.

I get knocked down, but I get up again - Bulga will fight on! https://t.co/H5jzCaAylL #locklthegate #auspol pic.twitter.com/KXuIiExoXd

They have a clear course of appeal once more. They can go back to court and demand that the Planning and Assessment Commission use accurate data.

So we say to the Planning and Assessment Commission: if finance is all that matters to you, then at least use up to date and accurate financial data.

People’s live are being destroyed here and all because the PAC couldn’t – or wouldn’t – get their sums right. 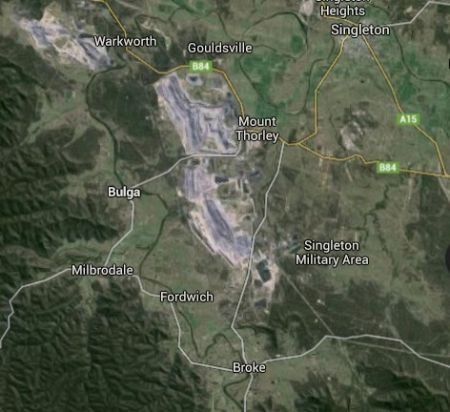 The enormous sprawling mass of the Mt Thorley mine appears as a grey scar on the landscape, threatening to come even closer to the village of Bulga. (Image via Google Maps)

The green beauty of Bulga and surrounds. (Image via savebulga.org.au)