In the south-east corner of NSW, the interests of forestry and wildlife are again clashing — with this time innocent wombats being put in the firing line by NSW Primary Industries Minister Katrina Hodgkinson. Lachlan Barker reports.

In the south-east corner of NSW, the interests of forestry and wildlife are once again clashing.

The Glenbog State Forest is being logged for wood chip and, in the process, the local wombats are suffering — badly.

The forestry contractors, working under the auspices of the Forestry Corporation of NSW, have shown a callous disregard for the fortunes of these iconic Australian animals.

Wombat burrows have been buried and the animals that use them buried alive.

What makes this all too heart breaking to contemplate is that local wildlife carers met with the Environment Protection Authority before work began and made provision for the wombat’s safety.

However, these provisions have been largely ignored. 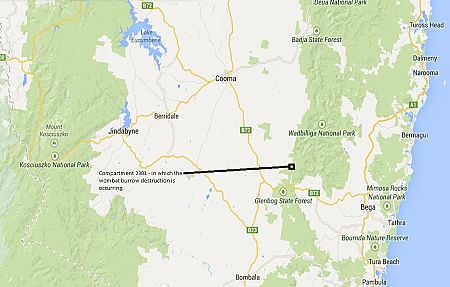 I contacted local wildlife carers Ray and Marie Wynan to find out about the issue.

Marie sent me a PDF document, outlining the three provisions they had had inserted specifically into the foresters’ harvest licence for the wombats protection.

Truck movements are restricted during the early morning and late afternoon. No haulage may occur in the morning before sunrise or from one hour prior to sunset.

Private property (Lot 110) located adjacent to the western boundary of compartment 2321 is owned by [name removed for confidentiality]. If operators identify any wildlife injured during the operation have requested that it be reported to them as soon as possible so that they can collect and treat the injured animal. Call [name removed for confidentiality] to report any injured animals.

As far as practicable damage to wombat burrows must be avoided. In particular, care should be taken to ensure that burrow entries are not collapsed or obstructed by large woody material, rocks, etc. Approximately 100 wombat burrows have been marked with yellow/black striped paint in the field by local representatives of the “Wombat Protection Society” to assist machine operators in identifying their location. 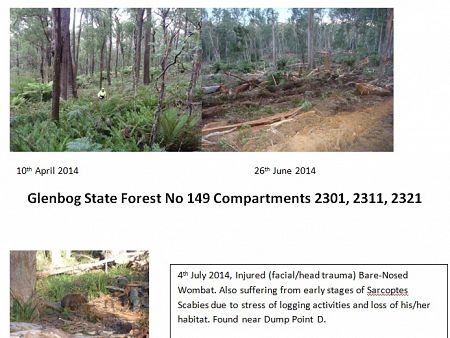 A companion document sent to me by Marie Wynan gave an indicator of the flouting of the haulage time agreement:

This is of concern because dawn and dusk are the times of highest wombat activity – the times they move about the forest to feed – and thus this puts them at risk of vehicle impact.

But it is the third provision headed 'Common Wombat' that has caused the most concern for the Wynans.

A document, entitled 'Summary to EPA 29th July 2014' sent to me by Marie Wynan is a long, sorry list of damage to wombat habitat.

Here is the first listing from Marie Wynan’s document referring to damage of wombat burrows: 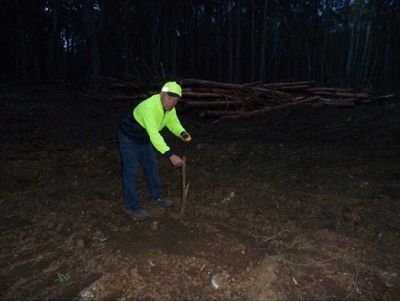 There are more like this, totalling ten breaches of the provision headed 'Common Wombat'. 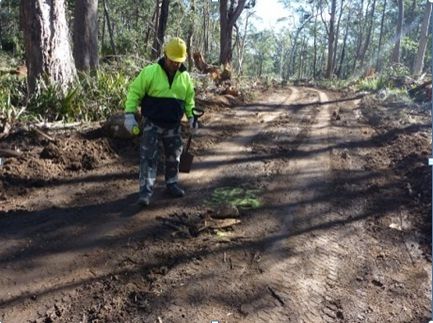 So Glenbog forest is being logged, seemingly with little or no care being paid to the noble wombat.

I then contacted the NSW State Government to find out if anything would be done about this.

First, I called the minister responsible for forestry in NSW, Katrina Hodgkinson. Her portfolio is listed as Minister for Primary Industries, under which forestry and its activities are housed. However, she has moved forestry away from her direct control, making a State-owned corporation known as the Forestry Corporation of NSW.

So her press secretary told me to call them.

Consequently, I contacted the EPA and asked about the issues concerning Glenbog Forest.

The EPA worked with FCNSW before logging started and gained a commitment that FCNSW would avoid damaging common wombat burrows - this included ensuring burrow entrances do not collapse and remain unobstructed by logging debris.

So, at least the intention was there to not damage wombat housing.

'Wombats CANNOT dig themselves out and end up suffocating to DEATH' http://t.co/CtNkS0rAu0 via @MailOnline

The press release goes on:

The EPA undertook a site inspection in Glenbog State Forest in July 2014 to see firsthand how harvesting was being undertaken.

The EPA identified some areas where on ground practices could be improved and made recommendations to FCNSW about how to better protect the areas wombat burrows. These recommendations have been used by FCNSW to modify their plans about how to store and handle logs and machinery in particular locations.

The EPA also met with residents to discuss their concerns directly. As part of this work, local residents and EPA officers identified and marked wombat burrows in areas that had not yet been logged and ensured FCNSW were aware of these burrows.

Then an ominous word entered the message — 'understands':

The EPA understands FCNSW has also been working with local residents to identify wombat burrows for protection.

The EPA will continue to actively monitor FCNW harvesting operations in Glenbog State Forest and will conduct a post logging inspection following completion of operations in that area to ensure compliance with IFOA.

My skin began to shiver when I read that word ‘understands’ — for that smacked of, once again, few EPA staff on the ground to 'actively monitor' proceedings.

Though I would like to make crystal clear that no blame is attached to the hard working staff at the EPA — such as press officer Liza Cassidy, who went out of her way to provide me with information.

It seems that, once again, the real problem is one of an understaffed compliance body – in this case the EPA – attempting to monitor on-ground damage in Glenbog Forest from their offices in Sydney.

Therefore, the blame for these hideous wombat deaths lies with the Baird State Government and Minister Katrina Hodgkinson, for not providing adequate staff to monitor the project for compliance.

The final word from the EPA was after I asked them whether any penalties would be handed out for wombat habitat destruction and deaths of the animals themselves, when their response was:

The EPA will consider its regulatory response after it has conducted its post logging inspections later this year.

Sadly, by then, all that may be left of the wombats of Glenbog forest could be a lot of skeletons.