THE REPORT HAS NOW BEEN RELEASED on the dredging at Gladstone harbour, and it doesn’t auger well for the dredging, and subsequent dumping of dredge spoil, at Abbot Point, further up the coast at Bowen.

Essentially the problem at Gladstone was a leaking bund wall, built to contain the sediment within the harbour.

However, as Jon Brodie, research scientist with Tropwater, an adjunct of James Cook University described in The Conversation, the problems were vastly more systemic, involving lack of oversight by understaffed government departments.

'A key part of the Gladstone Harbour dredging program for the A$35 billion Curtis Island liquefied natural gas export hub has failed due to bad construction, inadequate monitoring and poor environmental oversight by state and federal governments.'

And this has ominous overtones for Abbot Point.

What’s more, new concerns – well, actually, old concerns that have been repeatedly ignored – about the toxics load in the Abbot Point dredge spoil can now be revealed.

As this paragraph from a GHD study in 2009 shows, contaminant release is listed as possible.

So is the sediment and the water surrounding it likely to be toxic?

Almost certainly — and here’s why.

In 2008, John Holland Construction did sandblasting at Abbot Point.

This is involved using abrasive blasting grit – mainly a product called garnet – that they used to clean the surfaces of the terminal before repainting.

However, in the process, they committed environmental offences, for which they were taken to court by the Department of Environment and Resource Management (DERM).

I contacted DERM, now restructured and renamed the Department of Environment and Heritage Protection, the department that handed out the fines and asked:

In 2011, construction company John Holland was fined $195,000 for releasing material at two Queensland coal terminals including Abbot Point, in breach of their development approval.

The court accepted that there was no evidence to suggest that the material released into waters was contaminated with toxic metal or that it caused environmental harm.

There was also no evidence of the amount of material released into waters at Abbot Point Coal Terminal.

I then emailed back and asked:

Well if the stuff wasn’t toxic, why were they fined?

Their response was to stonewall, saying:

The charges were for breaching conditions of a development approval by releasing material at two coal terminals, including Abbot Point.

However, if they didn’t want to answer the toxic question, I knew someone who did.

John Broomhead worked for John Holland as environmental co-ordinator at the time of the sandblasting.

The product used in the sandblasting is garnet, or in this case , as John told me: “used garnet”.

Used garnet is cheaper — but dirtier.

Garnet works by abrading the paint, then forming a sticky little ball of paint/garnet residue.

Either product is toxic on its own, but together they form a little ball of uber-toxics. Indeed, the paint is designed that way to stop marine invertebrates – such as barnacles – clinging to metal surfaces.

Sandblasting done with environmental concerns uppermost sees that this abrasive residue is collected and reused, or disposed of properly.

However, John Broomhead told me that the Abbot Point job was hardly that.

"You’re supposed to do what’s called encapsulation, 'bagging' the area that you are sandblasting, so that none of the residue can escape. But they didn’t encapsulate it till late in the job, when I pointed out to them that they were facing heavy fines for residue release.”

“How much in fines were they facing?”

“Well, at one point, it was nearly $60 million. However, something mysterious occurred in the process, and they ended up only being fined $195,000.”

John put that into context for me by saying:

“There was a caravan park owner on the Sunshine Coast who released sewage into a nearby creek and he got fined $110,000.”

So then I asked:

“So John, if they didn’t encapsulate until late in the process, how much, if any, of the residue got released?”

“Well, there was two and a half tonnes of this residue unaccounted for.”

Two and a half tonnes!

I had a mental picture of a few kilograms here and there, maybe a few parts per thousand over the environmental guidelines, but this seemed to indicate a serious environmental threat.

So, I took a look at the analysis done up at Abbot Point.

This graphic shows the sighting of water quality analysis data loggers used by consulting firm GHD in their 2009 study. 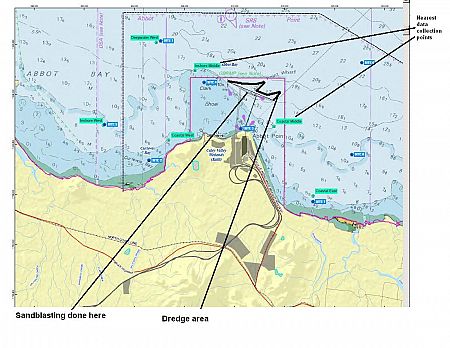 These data sights seemed a long way from the truth, both literally and metaphorically, and so I sought an expert opinion from Jon Brodie.

I sent him this graphic and asked:

Jon, I would have thought that contaminant detection would need data logging sites under the terminal, where the sand blasting offences occurred?

I don't know the amount of the contaminated blasting material that was released although this may be in the court case records.

As we (Tropwater not me specifically) were involved in some of the more recent work on sand blasting there as consultants it's also difficult for me to access the confidential data (Chinese walls and all that).

However you are correct - to sample the contaminated (from the blasting material) sediment you would have to sample in close proximity to the terminal.

Data loggers will not work - you need to take actual sediment samples. Alternatively you could use 'passive samplers' for metals which sit in the water for many days and 'suck' up metals.”

So the water quality report is open to question.

And Jon’s response opened up a new line if query — the sediment itself.

So I took a look at that and it likewise showed more than a taint of inadequacy.

This graphic shows the sediment analysis done by GHD in the same 2009 study. 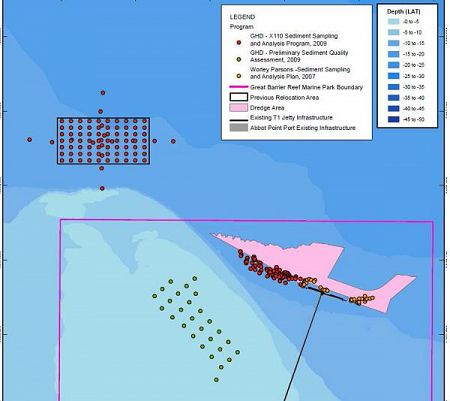 The brown circles are a study done by WorleyParsons in 2007 and the red show where GHD analysed sediment in 2009.

The black indicates the position of the terminal.

The GHD study of 2009 was done (partly) to test for possible contaminant release from the John Holland incident — but, if that’s so, then they for some reason avoided analysing in the area most likely: directly under the terminal. 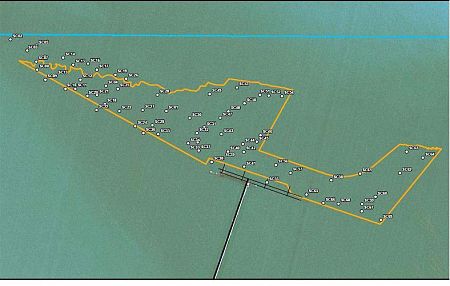 This study analysed the sediment that is to be dredged and then dumped in the marine park.

Once again, it can be seen that no sediment sampling was done under the terminal.

So, again, I sent all of this to Jon Brodie for comment.

Sadly, even possible limitations in the study of toxics in the dredge spoil, were of lesser importance now.

As Jon told me:

"The real problem now is lack of oversight. The process is corrupted."

Jon strongly clarified that he wasn’t saying a person, or persons, were corrupt.

It was that there was simply too few people trying to monitor too many environmental projects.

As he said in his piece in The Conversation:

On paper at least, numerous, stringent conditions have been set for environmental management at Abbot Point by our governments and GBRMPA. Those include environmental compliance monitoring and an offsets program.

But will the Australian or Queensland governments have the skilled staff to adequately oversee all those conditions? I don’t believe they will.

On this topic, on the morning of May 12, 2014, ABC Radio National Breakfast quoted a public service report, which stated that in September 2011, there were 800 projects being monitored by only 10 federal environment staff.

And this was before the current federal budget was announced, which is thought to call for the shedding of 16,000 public servants, many in environmental monitoring positions.

All of which highlights Jon Brodie’s reasons for concern.

And as I ended my phone call with Jon about this, he did express how downhearted he was, saying about Abbot Point:

I was downhearted before, but if Jon Brodie gets around to saying this, then things are serious.

However, just before we about to publish this article, hope was born again.

Deutsche Bank have pulled out of financing any expansion at Abbot Point.

In an ABC Online story published May 23, 2014, Deutsche Bank announced that

... it would not finance an expansion, without the assurance of both the Government and UNESCO that it would not damage the Great Barrier Reef.

"We observe that there is no consensus between UNESCO and the Australian Government regarding the expansion of Abbot Point," it said.

"Since our guidance requires such a consensus as a minimum, we would not consider a financing request."

The history of this Abbot Point expansion has shown the Federal Environment minister, Greg Hunt, continually denying there are any environmental concerns.

But now Deustche Bank have said, in the only terms that Greg Hunt is likely to listen to: No money for you, because you might damage the Great Barrier Reef.

I wonder if he will listen?