The Federal and Queensland governments have now approved dumping the Abbott Point dredge material in the pristine Caley Valley wetlands, thereby destroying two ecosystems for the price of one. Lachlan Barker reports.

DESTROYING TWO ECOSYSTEMS FOR THE PRICE OF ONE

Time to catch up on the unbelievable antics of the Federal and Queensland governments, regarding Abbot Point in north Queensland.

The history (in brief) is that to expand the coal loader port at Abbot Point these two governments took the lunatic decision to dump the spoil from the dredging required into the Great Barrier Reef Marine Park.

However, the outcry – within Australia and around the world – was so loud that even these two governments had to listen.

So they came up with a new plan: to dump the dredge spoil on land.

When this first came up, my office manager here where I do my writing, pointed to the story on the screen and said to me

“Is this a victory? Are we happy about this?”

I screwed up my face in intense thought and replied:

“Sort of, if they are going to dump the stuff a long way inland, and a long way from the nearest river, so the stuff can’t leach out, then that’s sort of a victory.”

However, once the facts came out, it turned out that the Federal and Queensland governments were going to dump the dredge material in the pristine Caley Valley wetlands, on the coast near Abbot Point.

In essence they were now going to destroy two ecosystems for the price of one. So, no — this is no victory, quite the opposite.

Wetlands, as is now generally well known, form a semi-permeable membrane between the land and the sea. Mangroves and other estuarine plants then filter the waters moving off land, and ensure that the waters that flow outward, in this case onto the Great Barrier Reef, are pure and clean. Thus, dumping dredge spoil into the wetlands on the shoreline means that all that will happen now is that the dredge spoil and the possible toxic material within, just take a bit longer to get into the Great Barrier Reef Marine Park.

Now it doesn’t have to happen, a properly constructed and well monitored dumping site may possibly contain the dredge spoil, but considering the environmental track record of the Federal and Queensland governments so far – Gladstone Harbour not least, where a poorly monitored bund wall allowed leaking of dredge material – this is vanishingly unlikely.

And so it proved to be when I got the specs for the dumping plan — and truly frightening it is.

The specs from the Queensland Government say that the plan is to dump 1.7 million cubic metres of dredge spoil, confirmed via email by the Federal Department of the Environment:

‘The 1.7 million cubic metres is the correct figure for the current referral.’

This number – 1.7 million, is a victory of a sort, down from the initial three million cubic metres that Federal Environment Minister Greg Hunt wished to dump. 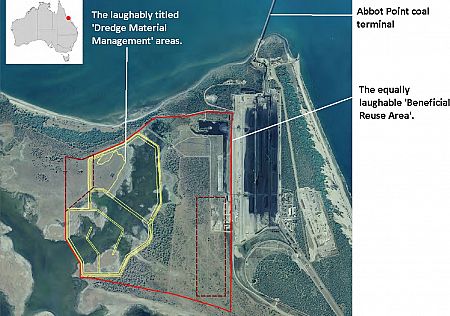 The graphic above shows the plan for the dumping, with the yellow outlines showing where the spoil will be placed — an area of roughly 200 hectares. Thus 1.7 million cubic metres of spoil will fill this area with close to a metre deep layer of sludge.

Clearly, this will destroy forever this area as any form of pristine habitat.

Further to that, as can be clearly seen, the proximity of the dump site to the ocean means that it will only take one cyclone, or perhaps even one king tide, to wash the lot into the sea, and have the dark, murky dredge spoil spread up and down this coast and out onto the Reef.

Furthermore, the Queensland government specs even say that the bund walls around it will not contain the spoil.

Here is a quote from the specs:

Operational impacts of the beneficial reuse area are as follows: Seepage of dredge tailwater through the bund wall into the Wetlands.

The bund wall of the beneficial reuse area will be permeable and therefore, seepage of dredge tailwater into the wetland basin will occur. 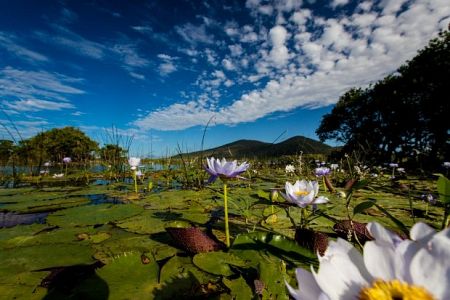 The waters of Caley Valley: Can you imagine the heartbreak of seeing these pristine waters turned into an industrial wasteland? (Image via greenpeace.org)

However, there is no need for the local flora and fauna to panic, as the document goes on to reassure us that:

Only short-term, localised impacts from seepage are expected due to low horizontal and vertical seepage rates, and the limited duration of seepage (i.e. during and shortly after the project).

Aquatic flora and fauna in the Wetlands are expected to be both resistant (i.e. tolerant of change) and resilient (i.e. capacity to recover following disturbance) to changes in hydrology and water quality, and therefore long-term changes in the localised zone of influence are not expected.

“It won't last long and I’m sure you'll recover.”

So this is the madness that Greg Hunt and Queensland Environment Minister Andrew Powell wish to foist upon the ecosystems of the Reef and its onshore water drawing system.

Commenting on the sheer gross ecological destruction this will bring, via press release, Waters said:

‘The Newman Government wants to dump the Abbot Point dredge sludge on or near the Caley Valley wetlands, which are nationally significant, natural filters for the Reef, a fish breeding site and important shorebird habitat.’

Additionally, Senator Waters is furious that Federal minister gave those opposed just ten days to respond with comment on the dumping on the wetland, adding:

She concluded by summarising the ongoing plight of the environment in Australia at the current time, in which only mining has the ear of government, saying:

‘Obviously the Newman and Abbott governments only want to hear from the big mining companies, and are blocking their ears to everyone who cares about protecting the Great Barrier Reef.’

Initial reports indicated that the fast-tracked comment process was to allow work on the dump site to begin on New Year’s Day, however this hasn’t occurred at time of writing.

However, Greg Hunt has said that dredging may begin on March 1, 2015 and, if so, then the dump site at Caley Valley will need to be ready to receive dredge spoil before this date.

It is, one supposes, possible that Greg Hunt may come out and say that there will be no dredging and therefore no dumping at all — an outcome all who care for the environment wish for fervently.

But, as mentioned above, given the environmental track record of the two governments involved, this is extremely unlikely. Far more likely is that Greg Hunt already made up his mind to approve the dumping in the Caley Valley wetlands, therefore destroying two ecosystems for the price of one.

The Greenpeace website reports 80,000 signatories against this dumping at Caley Valley.

Comment has been sought by the Federal and Queensland Government.

SIGN TO SAVE THE REEF: add your voice and stand up for the #GBR http://t.co/euDlI1rzqo #qldpol pic.twitter.com/m3cUJ6dgTy