The rise of China and the bleak future for Western economies

A conversation with a London based politico-cum-financial source gives Barry Everingham grave concerns for the future of Western economic prosperity.

Human beings like certainty. We like structure. Because of this people tend to believe, against the odds, in anything that supplies them with that certainty and promises a future for a structure they dearly want to survive.

That “structure” is currently being offered in the West by politicians, who are suggesting that somehow there will be a return to what there was before the most recent round of financial disasters.

What has occurred is a one-off structural shift in where the power lies in the world economy—power has shifted inexorably to Asia and, specifically, China. Among the “Western economies” the only survivor of this shift will be Australia—all the others are heading for a storm.

At the World Economic Forum last year there was much talk of Asia being the engine of growth that would pull the world out of recession, but the critical and barely reported exchange came towards the end.

Quoting from the source's email:


Perhaps the sharpest exchange came in response to a question about the quality of life in the West. Was it, asked a participant, bound to decline following the financial crisis?

Not at all, said the person to whom the question was directed. After all, Japanese living standards haven't fallen through two decades of stagnation.

At this point, Xia Bin, an economic advisor to China’s State Council intervened.

“I disagree," he said. "The quality of life in the West has to decline after the crisis because the balance sheets are in such a poor state.”

The source says that this understates massively what lies ahead—there simply is no money.

Decades of promises of healthcare, education, pensions, care for the elderly, infrastructure etc are not going to be kept. Even now, no real structuring is taking place.

Greece’s “austerity packages” have not even begun to bite—everything is being expressed in terms of “big changes for five years time”.

In England, where the normal response is supine whining, students rioted recently about a modest increase in tuition fees.

It wasn’t an actual increase, merely an indication that there will be an increase in five years time—something that the students rioting will never need to pay.

The sentient have of course have spotted what is going on. Even Britain’s Prime Minister – who is only on the second job he has had in his life, the first being a public relations  executive – floated the idea of a means tested pension. Cue howls of derision from Socialists, but this is the way things are inevitably going for most of Europe.

As regards the Euro, this is a crisis that will never be solved. Many smart people have proposed various solutions but none of them are politically palatable for all parties concerned. There will never be a “solution” as such, so expect Euro crises throughout the years with financial band aids being applied to the broken limbs—the peripheral Euro economies.

The idea that Germany will leave the Euro and return to the Deutschmark (DM) is unlikely for two reasons. This is because:


This is where this PIIGS (Portugal, Italy, Ireland, Greece and Spain) debt actually is—in the balance sheets of the European banks. 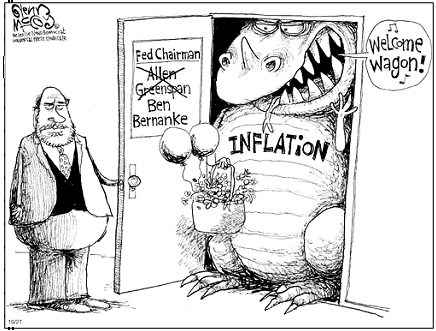 For Europe and the US, the slavering monster in the room remains inflation. The reported rates of inflation in Western economies are simply illusions.

Going back, some commentators predicted that the massive injections of money into the Western economies following the dotcom collapse would keep inflation under control. What happened was that it was kept under “headline control” by measuring the wrong things: the price of a loaf of plastic bread or a bottle of Ketchup in Bradford or Knoxville are irrelevant to the vast asset price inflation which occurred yet which was not, and is still not, a component of the inflation indices.

In our gut, we all know that prices rose massively— houses, transport costs, healthcare, school fees and so on. Barclays Wealth have their own model of inflation: key in income, costs, assets, school fees, etc, to produce your own inflation index. In the mid-2000s’ this has turned out to consistently be between 11 and 12% .

Inflation will strike again in all the economies where quantitative easing has been eased through.

So are there rays of light? Not for the West, sadly, no.

Xia Bin was right in what he said. Of course there will always be a multi stars holiday resort and we will still be dining at many chefs hats restaurants, but out in the streets they will be rioting and it is that collapse of law and order that many will fear most—much more than the collapse of the currency.

My mate says commodities in general are good buys, such as potash, but he is full on for gold—a five thousand pounds Sterling an ounce man! As we all know, gold is seen as a safe harbour during turbulent economic times.

And it looks like we are going to be living in "turbulent times" for some time yet.
BUSINESS INTERNATIONAL Barry Everingham China EU GFC rise of China US economy USA