Of Julia and Julian and the trimming of tongues

If a wrong thing is said, it can be argued, writes Bob Ellis, it does not need or deserve the cutting out of tongues. 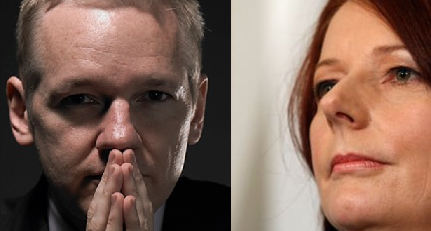 ASSANGE suing Gillard, which of course he could, stirs up in the thoughtful mind a few scenarios. Can Haneef sue Andrews? Can any Tampa refugee now living here, or in New Zealand, sue Howard? Can anyone who did not throw children overboard that week sue Reith? Can, indeed, anyone sneered at by Alan Jones sue 2GB?

I suspect they can. I myself was sued once, or my publisher was, by Tony Abbott for having said a woman influenced his politics. And this was unthinkable then, and he got forty thousand for it, the price then of a house in Woy Woy, and Margie got thirty thousand, the price of a house in Caboolture.

That was in another millennium, of course, and Justice Higgins is an honourable man. And what was a hateful utterance in one decade isn’t now. In the 50s, you could be called a Communist and ruined. Or a homosexual. In the 30s, a promiscuous widow, or the teenage mother of an adopted child. Now you can be seriously damaged if you refer, in a private message, to a woman’s genitalia. Two billion males now living have done this, including Barry Humphries (‘Gina’s hole’, ‘the bearded clam’), one on Q&A, and it’s a worry.

What Assange and Jones and Ashby now raise as a question is what privacy is, and if the concept means much any more. Do Chatham House rules, or Top Secret, or Private and Confidential mean, in the internet era ― nothing at all? Looks like it. Does photographing the Duchess of Cambridge’s breasts, and hacking Milly Dowler’s phone come under freedom of speech, or some kind of secular blasphemy? Is it wrong now to portray Mohammed on film, as it was once with Jesus? Or is it fair enough, or even ‘whistleblowing’ to do so, even if some people (directors, actors, cinema ushers, riot policemen) die of it, as Rushdie’s translators once did?

Where, then, in law, does privacy lie? And where does our freedom to speak, however cantankerously of this or that high official and their family?

I found it was wrong to suggest a woman had two brilliant lovers in a lifetime, one her husband, and influenced their politics. Assange is finding it wrong to show film of a war crime and so enrage the Pentagon he may do fifty years naked in solitary for it. Slipper is finding it wrong to vividly describe, like many novelists have (Roth, Nabokov, Amis, Bellow), a vagina, and Jones is finding it ruinous to say a man was unsettled by the deeds of his daughter.

This is difficult territory, but it always comes down, I think, to three things: Kennedy books, Mein Kampf, and Jon Stewart. Did Robert Dallek have the right to reveal John Kennedy knowingly passed on non-specific urethritis to Audrey Hepburn, Marilyn Monroe and Grace Kelly? Is this any of his business? Or ours? And does a suburban librarian have the right to lend Mein Kampf to a young man with earrings, tatts and spiky hair? And does Jon Stewart have the right to portray, by eloquent mimicry, George Bush as a moron? Or Bill Leak the right to draw a public figure naked?

It is difficult, as I say, because words do harm, it is part of their function. But once you start stoning to death young men who say ‘Yaweh’, or old men who write, in a private text, ‘unshelled mussel’, or mid-aged men who reveal evil done by great powers, or snoopy historians who find Abe Lincoln had syphilis and his wife died mad of it, you are in the same territory, and the same police state cast of mind, as any South American dictatorship, or any ancient theocracy, or any prurient Scientologist, and you are probably not well in your mind.

If a wrong thing is said, it can be argued. It can be debated. It does not need, and it does not deserve, the cutting out of tongues.