In response to a report on the costs and health effects of coal mining in the Hunter Valley, NSW Premier Mike Baird has joined the chorus of mining industry shills to wax lyrical about the bounty and wonder of dirty black rocks.

The NSW Premier, Mike Baird, has joined with NSW Mining CEO and his own former chief of staff, Stephen Galilee, in the old game of exaggerating the importance of mining to the NSW economy.

Certainly old news to all who follow the environment section here at Independent Australia, but sadly it means that yet again we have to go through the mill of helping the Premier get his facts right, as well as getting Galilee to just shut the hell up.

It began with this story at ABC online, referring to a report done by the Climate and Health Alliance (CAHA), showing that health costs associated with just the burning of coal in the Hunter Valley now run at a conservative estimate of $600 million a year.

NSW Mining immediately saw this as a threat to their industry and so joined with the Premier to unfairly attack the report’s authors and make out that this report was all a load of leftie, hippy, pinko nonsense.

“In simple terms the coal industry is a very important part of the economy. There's over 20,000 direct jobs.”

NSW Premier Mike Baird's plans to expand Hunter Valley coal mining, instead of phasing it out and transitioning... http://t.co/6Vg9FvLciQ

I contacted the Australian Bureau of Statistics (ABS) to verify this claim. A helpful analyst named Sebastian looked up the relevant data and replied by email:

Now you may ask why do we get upset over an exaggeration of about 5%?

Well, I get upset because that’s the mining industry’s game, lie, exaggerate and exaggerate again; do whatever it takes to perpetuate the myth that mining is the cornerstone of the economy, and every little bit of exaggeration helps it seems.

So with my figures in hand I contacted the Premier and asked him to stop this game of puffing the mining industry.

As usual, I got no reply, but I do wish to say to Premier Baird, if you want to seriously claimi that the LNP is the only party that understands the economy, the first step towards credibility is to manage to get your numbers right.

But it gets worse.

Baird then says of mining:

"It is a critical part of the NSW economy.”

To explain that, mining income to the state’s coffers in the financial year 2014-15 is projected to be $1 billion. This figure comes from the NSW Treasury MYFO forecast which indicates royalties will drop by $242 million from the $1.3 billion figure of 2013-14.

Subtract the health bill from the Hunter of $600 million and we are left with $0.4 billion. 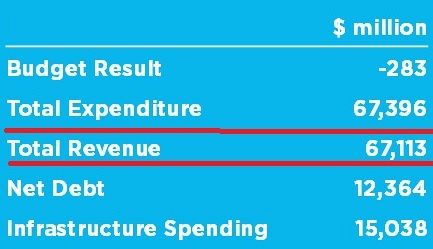 The actual commercial profits from the coal itself, of course, go to the company and the bulk of these companies are foreign owned.

What’s more, since July last year we have been mining thermal coal at a loss, so there is no clear indicator if there are any profits at all.

So no more of this “mining is critical to the economy” malarkey, Premier Baird, please.

All that human health misery. All that holocaust of environmental destruction that is going on, to which Baird wishes to add to with new mines. And all for 0.4% of the state’s revenue.

Moving on to that serial dissembler Stephen Galilee — bad as the Premier’s misrepresentation of the mining industry is, Stephen Galilee just went over the top and out of hand condemned the report without, I strongly suspect, even bothering to read it.

“There's absolutely no evidence to support the claims made in this report.”

I was lost for words, I really was. Now, unlike Mr Galilee, I have read the report and I can assure you it is jam packed with verifiable data supporting the estimate of $600 million in health costs — and that’s just from coal combustion. Mining of coal and the coal dust therefrom, is another factor difficult to quantitate and thereby cost.

Then Galilee goes on to say:

“The fact is, according to the EPA, the Hunter's air quality has been also improving."

I contacted the Environment Protection Authority (EPA), housed as it is in the NSW Department of Environment and Heritage and asked them to confirm or deny this.

The press officer there, Jenny sent me this email:

As you can air quality did improve over one year, but as Jenny from the EPA said, 'it is not a long term trend’.

So what’s the improvement that Galilee is trying to foist? Well it’s nothing to do with coal mining, rather bushfires, as stated on the EPA website: 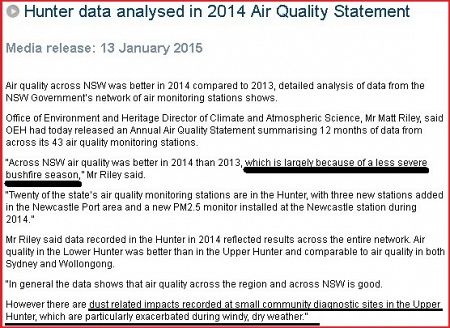 Galilee is clearly trying to indicate that although coal production in the Hunter goes up every year, projected to increase to 243 million tonnes in 2022, the air is getting cleaner.

Nothing could be further from the truth.

This graphic from the CAHA report shows the appalling toll on the air of the Hunter Valley:

Also, I spoke with the lead author of this report, Fiona Armstrong, and she made a sad additional point. The report can only quantify concise costs – chest x-rays, for example, that are easy to quantify – however the stress the coal industry puts on those dwelling in the Hunter is massive, severe and, sadly, unquantifiable.

The Department of Environment and Heritage are, it seems, in bed with the coal industry, so the little people of the tiny rural hamlets of the Hunter have no recourse to justice and find themselves feeling powerless to stop a coal mine moving in next door.

As the report puts it:

‘The sense of hopelessness described by communities unable to influence the outcome of mining proposals can contribute to depression.’

It’s a terrible time for those in the Hunter. Despite what elected officials like Mike Baird might say, or their cronies in the mining industry, like Stephen Galilee, coal is not the lifeblood of the Hunter Valley — rather its a likely cause of death.

Coal is destroying the Hunter Valley, not saving it.