By cutting back ABC services in regional and remote areas – where media choices are already limited – the ABC risks sending a message that some parts of Australia are more important than others, writes Andrea Carson from the University of Melbourne (via The Conversation).

Government cutbacks to Australia’s publicly funded broadcasters – the ABC and SBS – total A$308 million over five years. The lion’s share ($254 million) is coming from the ABC. Scott argues this amounts to an 8% per year funding shortfall when May budget cuts to the now-defunct Australia Network are included.

In practical terms, Scott revealed that the ABC will operate with less funds by:

Scott’s decisions provide a moment to consider the consequences of the changing media landscape in the digital age.

Take the example of Radio National’s Bush Telegraph. For many years, it provided a common voice or, to borrow the words of scholar Benedict Anderson, an 'imagined community' of rural and regional Australians who might never meet but who were brought together in a shared communicative space.

Why it doesn't make sense to cut Lateline, Stateline, world Today, Bush Telegraph & a host of others @Michael_Lallo http://t.co/1daMufzAwA

For Anderson, linking unknown people to each other in this 'imagined community' through common interests as expressed through reading – or, in this case, mainly listening to – shared Australian stories speaks to the civic functions of the mass media. Anderson, writing mainly about print media, concluded that this civic function was an essential part of building a sense of belonging and nationhood.

This shared space was similar in concept to the communal, communicative space of the 'public sphere' – made famous by German sociologist Jürgen Habermas – where

'... private people come together as a public.'

Both Habermas and Anderson, in different ways, understood that the mass media, when not corrupted by commercial interests or other agendas such as the political or personally vindictive, played an important role in the public’s shared conversations and strengthened democracy.

By cutting back in regional and remote areas – where media choices are already limited compared to those of city cousins and digital connections are often unreliable – the ABC risks sending a message that some parts of Australia are more important to our national conversations than others. The loss of local voices in diverse places by default suggests that what really matters is news and views from Australia’s largest east coast cities of Sydney and Melbourne.

Scott’s announcement did nothing to assuage this concern. The decisions mapped out in his official statement made clear that 'economies' are driving these changes — not social, cultural or other non-economic considerations. Scott’s emphasis that there is an opportunity to improve audience experiences and digital and online expertise only underscores that Australians with the fastest internet speeds and strong mobile coverage will be the greatest beneficiaries.

Scott is right to point out that change is now a media industry constant. In the digital revolution, the media industry is one of many disrupted by change. Others are the music industry, postal services and retail shopping.

The 'economic efficiencies' arguments put forward largely by conservative commentators and politicians to justify significant cutbacks to the public broadcaster on economic grounds are unconvincing. According to ABC Friends national spokesperson Glenys Stradijot, the ABC’s allocation has almost halved as a share of government funding since 1996.

These arguments also fail to consider the non-economic rationale for public funding and the repeated findings from various pollsters that Australians regard the ABC as one of the nation’s most trusted institutions.

The fact is news media are not like other hard-hit industries because of the particular civic functions of the media. Accurate, public interest journalism plays a well-documented role in informing the public. That, in turn, strengths democracy by providing transparency and exposing public wrongdoing.

This is what politicians such as Liberal Democrat senator David Leyonhjelm fail to fully appreciate.

He told the ABC’s Insiders program on the weekend that:

"How would you then have any independent broadcasting if it was all privately funded?”

Leyonhjelm responded that Sky News, for example, is:

"… perfectly independent, but they rely on private sector funding and advertising."

"Abbott owes the Murdoch press, and it wants the ABC radically cut" http://t.co/FH14IlYhej

Here, Leyonhjelm misses the point. Sky News, independent or otherwise, is not diverse in terms of its audience reach or its content. It is a user-pays service that provides for a small, niche public. By definition, a public broadcaster has a duty to include the "many” not the “few” in a diverse public discourse.

serves to highlight a key question arising from these latest media cutbacks.

Are the types of stories we will think about in the future those that are of most interest to Australians living in Melbourne or Sydney? I hope not.

Andrea Carson worked previously as a producer at ABC's 774 and 7.30. This article was originally published on The Conversation. Read the original article. 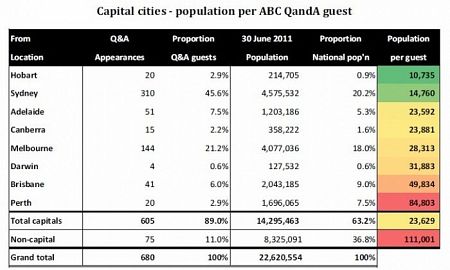