How the MSM flog stories from blogs

Bloggers stealing their stories from the mainstream media? If Sandi Keane's experiences are any guide, the opposite is more likely to be true. 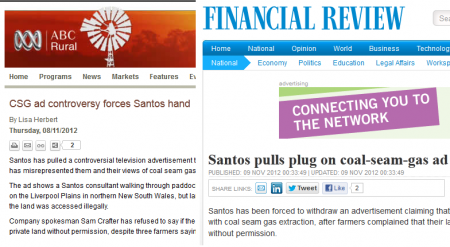 MAINSTREAM MEDIA constantly spin the line that online journalists are plagiarists, who – while they wear out “boot-leather” chasing stories – simply re-shovel their hard-earned efforts.

Well, in my experience, the boot is quite often on the other foot.

I’m an online journalist who likes to break stories? My view is ― why bother to write if you aren’t the first or don’t have an original angle? And I break stories regularly ― through hard, painstaking, detailed, time-consuming – often quite expensive – investigative reporting.

Anyway, this week the mainstream media appropriated my hard-earned investigative efforts without any attribution at all. And this is far from the first time this has happened to me. As for this publication, it seems to happen on about a weekly basis these days.

If that wasn’t bad enough, the mainstream media go on and on about how they (unlike us mere mortals in the online world) provide “context” to stories ― remember their sanctimonious superiority over Gillard’s misogyny speech? Yet, not only did the mainstream media outlets in question – the ABC and the Australian Financial Review – re-shovel my story — they also failed to provide any context. Yes, they explained that Santos had pulled its CSG ad, but they failed to in any way explain the “how” or the “why”.

One would be forgiven for thinking, after reading their reports, that it was their investigations that had led to Santos shelving the ad. In fact, they did nothing of the sort; essentially, all they did was take my hard work and use it as their own.

All the courtesy and ethics of a rhesus monkey.

So, let me tell you what really happened.

Some weeks ago, New Matilda’s editor asked me whether – given the popularity of the last story I’d written for them – I’d like to write another. I suggested one on PR spin and we agreed on the appropriate remuneration.

After several days tracking down the latest social media tools used by PR/ad agencies to manipulate public opinion, I rang Drew Hutton from Lock the Gate, who had appeared on a panel with Katherine Tey-White from Futureye (specialists in ‘Social Licence’). I asked about the issue of ‘social licence’ in general and if any of the CSG miners were running dodgy ads. He put me in touch with farmer/anti-CSG campaigner, Rosemary Nankivell.

Rosemary was sure one of Santos’ pro-CSG ads featuring farmer and Santos employee, Warwick Moppett, was not filmed on his farm which she said was at Gilgandra, some 200 km away from the Gunnedah Basin where she believed the ad was shot.  She thought the scene showing Moppett pulling up at an old gate with water in the background was filmed on Don Hubbard’s property. She also said the cotton bales had been claimed by Ben and Trish Kelly after they saw the ad.

I contacted both and discussed any identifying features to verify the story. Don Hubbard recognised the old gate and the shores of Lake Goran beyond. He was adamant that it was his property and was pretty sure the scene of the canola field was filmed on his Ben & Phoebe Clift’s property ― his neighbours.

I rang the Clifts, who confirmed the crop showing Mt Coolanbilla in the background as theirs.  I was also put in touch with two people who had seen the crew filming near Clift’s and Kelly’s. I spoke to one of them. We verified the date by the fact the canola crop was flowering and when the cotton bales were collected.

It was essential for my hypothesis to show why Santos’ ad agency didn’t choose to film on Warwick Moppett’s farm. I rang a contact from Lock the Gate. Did they know anyone in the Gilgandra area where Warwick Moppett lived? Could they verify whether Moppett farmed canola or cotton and take photos of his property?  Carmel obliged and within a day or two sent me the photos taken by Milton Judd with his description of the property. I spoke to Milton and confirmed with him that he’d never seen canola or cotton grown on the Moppett farm.

I then rang Santos for the name of the ad company. It was KWP! Advertising in Adelaide. I left several messages with KWP’s Karyn Smith, advising I was publishing the story and asking if they would like to comment. I followed this up with an email on 2 November.

The next day, Trish Kelly received a phone call from Mark Rogers of Santos, apologising for using their cotton bales in the ad without permission. Bingo!

I received an email response from Andrew Fotheringham of KWP on 5 November.  He advised that they’d filmed crops in the Gunnedah area but had strict guidelines about private property and the ad was filmed from the road or “fringe” on the property. I responded that the guidelines had indeed been breached with two scenes clearly showing Moppett/film crew trespassing on both Hubbard’s and Clift’s properties.

The story ran in New Matilda on Tuesday 6 November. It unleashed a tirade of complaints on Twitter.  Santos’s Group Manager CSG Policy and Communications, Matthew Damon, was involved in various heated exchanges, especially with the Greens’ Jeremy Buckingham and anti-CSG campaigner Rosemary Nankivell. 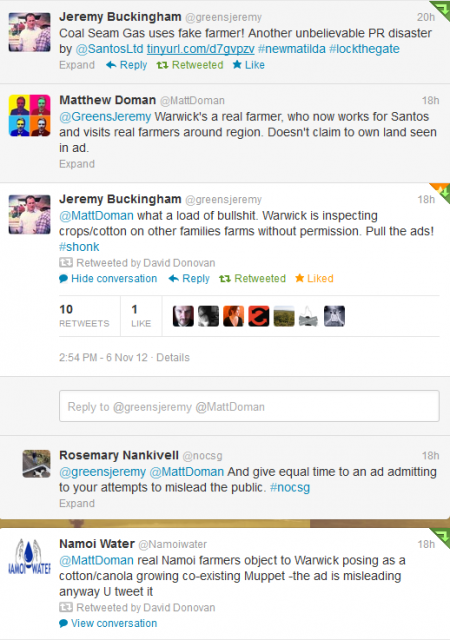 The next day, Independent Australia ran the story with managing editor Dave Donovan’s usual attention to attribution ethics and a link to New Matilda. Dave also posted the heated twitter exchange that called for the ad to be pulled.

That day, ABC Rural also ran the story using almost the same lead and quotes from the very same people.


Don Hubbard, from Spring Ridge on the Liverpool Plains in northern NSW, was shocked when he turned on the television and saw another farmer standing in his paddocks, selling the virtues of coal seam gas.

My lead in New Matilda on 6 November (the day before):


When Don Hubbard sat down to relax during spring this year after a day’s canola harvesting, he was shocked to see his property and that of his neighbours, Ben and Phoebe Clift, featured in a Santos coal seam gas (CSG) ad on the TV.


“I've travelled a lot and there isn't much better dryland farming country in the world than in this particular area on the lower Liverpool Plains. If you can't stop coal seam gas development here, then I really despair about agriculture in general."

Mine in New Matilda on 6 November (Quoting Don Hubbard):


"There is no way an operating broadacre farm can co-exist with CSG wells and there is no better dryland farming anywhere in the world than here on the Liverpool plains. If governments haven’t the wherewithal to protect that, I despair about the future."

Me, in Independent Australia on 7 November:


Don Hubbard, who has travelled extensively around the world, describes the O’Farrell government’s decision as “plain crazy”.

“There is no way an operating broad-acre farm can co-exist with CSG wells, and there is no better dry-land farming anywhere in the world than here on the Liverpool Plains. If governments haven’t the wherewithal to protect that, I despair about the future.”

I can understand if Don Hubbard decided to give the ABC the same quote, but had I been the ABC reporter, I would have asked for a fresh quote given it had already been used and published the day before. I contacted the ABC about all this, but the publicly funded public broadcaster have decided to fulfill their statutory obligations by simply ignoring me.

On the same day, Sam Crafter from Santos was interviewed on ABC’s 2CR Dubbo by Dugald Saunders. No mention was made that the dodgy ad story was broken by New Matilda. Crafter advised Santos might not run the ad in the future.

I rang Sam Crafter that day and left a message asking for confirmation that the ad would be pulled.

That night, at 7.30pm (on 7 November), I received a call at home from Santos’ Matthew Doman. He advised that Santos would no longer run the ad. He asked for my home email address and sent a confirmation email.  He then rang back to verify I’d received the email. I confirmed to him that I would immediately contact all the farmers involved in my story and would post his response on both New Matilda and Independent Australia’s websites. The update regarding the ad being pulled was posted on both journals that night.

Yesterday (a day later) ABC Rural’s Lisa Herbert ran the story that the ad had been pulled. But no mention was made that it was my investigation that forced Santos to pull the ad.

Today, two days after I’d updated my story on both New Matilda and Independent Australia that the ad had been pulled, the Australian Financial Review posted a story about Santos being forced to pull the ad after concerns from farmers. Like the ABC, there is neither any context nor attribution to the original source.

Farmers had been complaining about the ad campaign since it started at the end of September. But it wasn’t until I investigated and exposed the duplicity of the ad in both New Matilda and Independent Australia (which has pageviews of around 250,000 per month), leading to the exchange of verbal blows on Twitter that Santos decided to pull the ad. And I was the person Santos’ Matthew Damon rang to break the news just hours after the story had appeared the second time on Independent Australia including the heated Twitter exchange.

I am a paid-up member of the Media and Entertainment Alliance and am scrupulous about attributing original sources. I was paid by New Matilda to investigate and report on this story, which I did. It took me nearly a week to uncover the subterfuge in Santos’ ad.  My report provoked not only a media and political storm, but a massive company withdrawing one of its major pieces of marketing.

Is it too much I ask is that mainstream media comply with the same standards being set by those of us in the new media who believe that content is only valuable when it can be trusted and the Code of Ethics upheld. Both the AFR and ABC should correct the record and, moreover, we should stand up for small principled publications like New Matilda and Independent Australia that break new stories every week, only to have them gobbled up whole by the sharks in the mainstream media.