How the mainstream finally discovered the truth about Kathy Jackson

The only surprising thing about Kathy Jackson facing court for over allegedly embezzling HSU members' money is how long our dead wood media persisted in depicting her as a valiant whistleblower, writes Peter Wicks from Wixxyleaks.

FOR THOSE who rely on mainstream journalism for their news, it must have come as a rather nasty shock to hear about Kathy Jackson – Tony Abbott’s heroic union blower – spending like a drunken sailor on the dime of some of the nation's lowest paid workers.

For others who choose to stay ahead of the times and seek their news online, this news was only startling in that it had taken the mainstream so long to join the party.

On Wednesday in the Federal Court, the Health Services Union dumped a bucketload of allegations and evidence on Kathy Jackson. Kathy of course, as previously, deemed the Federal Court unworthy of her divine presence.

Amongst the evidence was the infamous $3,000 Bulgari earrings that Jackson purchased as a gift for Michael Williamson’s wife, Julie. As readers here were made aware of in May 2013, it was the Union members that paid for this gift and that money was given to the union in an alleged bribe to rob cancer workers of $3 million worth of their hard earned entitlements. 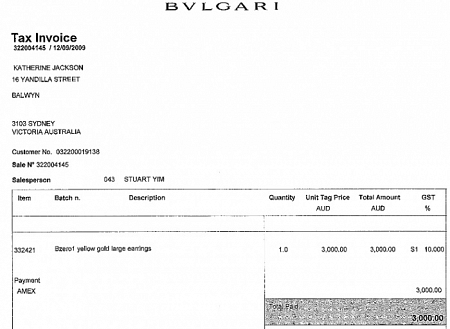 Also covered was her $63,000 honorarium payment covered here way back in 2012, as well as what the ABC described an 'eight-year spending spree'.

All of the details and documentation of Kathy’s eight years worth of allegedly using the union bank account as her own personal ATM can be found on IA's Jacksonville page. A convenient summary can also be found, with links to documentation, in my statement to the Royal Commission.

Yesterday, the HSU’s Federal Court case against Jackson concluded, with a decision on Jackson's financial fate expected to be handed down by the judge within the next 30 days.

However, this is just the civil matter, the criminal case has yet to start, with an investigation currently in progress.

The criminal investigation I can confirm is in the hands of a Federal Taskforce. That taskforce has a distinctly and aptly Greek name – Taskforce Heracles – and it is being headed up by police in the Serious and Organised Crime division. This is a joint operation with Victorian police.

No longer is it just in the slippery hands of Michael Smith’s old mates with their dodgy arrest warrants in Vic Police.

Being investigated by the Serious and Organised Crime division doesn’t leave a favorable impression and it sure makes Tony Abbott and Christopher Pyne look like poor judges of character (to put it mildly).

Speaking of Abbott, what about his appointment Kathy Jackson’s de facto hubby and, some allege, partner in crime Michael Lawler as vice president of what is now Fair Work Commission?

With the controversy surrounding Lawler’s involvement in HSU matters, his questionable dealings with the estate of dementia sufferer QC David Rofe and his taking of months upon month of fully paid sick leave from his taxpayer-funded $435K pa paying role, Abbott and Eric Abetz have been keen to absolve themselves of having to deal with a problem of their own creation.

Yesterday, the Australian Bar Association released a media statement linked below that contradicts the position of Abbott and Abetz. 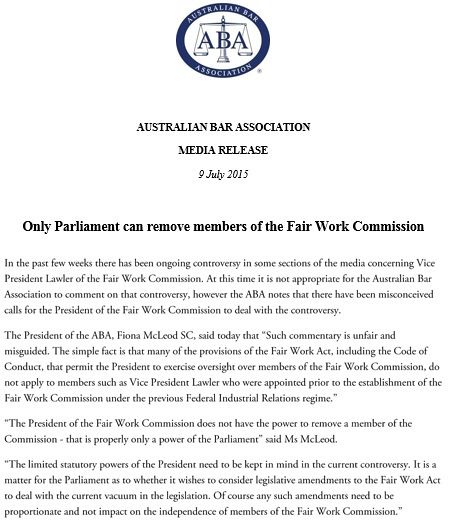 (Click on the image above to read the statement in full)

Parliament needs to remove Lawler now, not next week, now. He needs to be given no golden handshake with benefits no pension plan, in fact he should be asked to return taxpayer funds that he has taken as sick pay while dealing with Jackson’s legal matters and trying to move the proceeds of her alleged crimes into his name, matters still before the bankruptcy courts.

In fact, I hope Abbott's pseudo toughness on border protection covers not only fleeing terrorist wannabes, but also fleeing fraudsters.

How the mainstream media failed the public regarding this case is something that has bewildered many for a long time.

Kathy’s lead cheerleaders – Fairfax’s Kate McClymont and The Australian’s Ean Higgins – seem to have found somewhere to hide and lick their wounds because, since the Royal Commission, I can’t recall an article from either on any issue related to the HSU. Their absence, although not sorely missed, has been noticeable.

Since Fairfax let the likes of Nick McKenzie and Ben Schneiders loose on the matter, the revelations regarding all that McClymont had intentionally set out to ignore rapidly floated to the surface like an unflushable turd in a toilet bowl — one that I’m sure Kate would much rather was safely headed for the sea or the sewer.

Goodness me, @Kate_McClymont been awfully quiet about her heroine Kathy Jackson. Not a single twitter mention in all of 2015. How odd.

The Australian’s Ean Higgins must be left feeling like the village idiot. Since Brad Norington started on the matter, I have to say the credibility of News Ltd’s journalism flagship has kicked up several gears. Since Norington departed The Australian, the baton has been well and truly seized by Pamela Williams and she is sprinting with it. Both Kathy Jackson and her de facto hubby Michael Lawler have come under concerted attention in The Australian under their bylines, as if just to give an even greater indication of how out of touch or out of his depth Ean Higgins actually was.

Even Pia Akerman’s court pieces have had a distinctly different tone without the contribution of Higgins as a co-writer saw them slammed by a magistrate for reporting complete and utter falsehoods.

As a bit of a blast from the past, I looked back at an article written by Milanda Rout on the front page of The Australian all the way back in June 2012, which sought to make a mockery of yours truly for talking about evidence and allegations against Kathy Jackson and Michael Lawler. Ironically, it is now The Australian leading the charge on precisely the same allegations and evidence against the pair three years later.

How the tide has turned. It has taken its time.